Reports need to be smart, appealing, and understandable in order to have an effect. Yet in order for reports to have the right one, they must be read at the right time and in the right order. That is a lesson that we can learn from neurobiology.

You know how it is. Someone has news – both good and bad. What do you want to hear first? According to the brain researcher Gerhard Roth, people make better decisions when they hear the good news first. The reason is that a good mood doesn’t make people as euphoric as a bad mood makes them pessimistic. If someone is feeling negative, the effect lasts longer and rubs off on everything that follows. People tend to judge bad news even worse than it really is and, therefore, exaggerate it. Since pessimism doesn’t get us very far in the first place, the key is to make use of the asymmetry of the exaggeration. For example, decision-making bodies should set their agendas so that positive topics come first and the others follow. 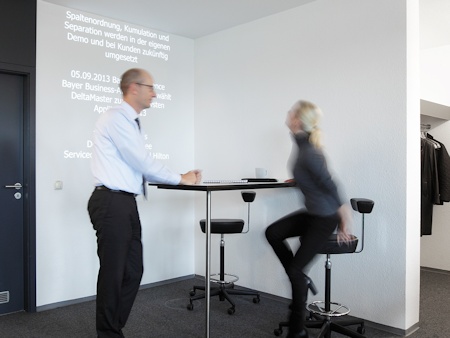 We’d like to mention here that we also report good news first. That’s why we even place it in the limelight.

We have closely monitored the hysteresis effect within our own company for some time now. Important meetings, for example, start with a round of cheerleading. All attendees have their turn to boast a bit and report three things that they have successfully accomplished in recent times. The effect is amazing. Afterwards, everyone is in a good mood. In addition, the mutual respect is almost always greater than it was beforehand – partially, because we as individuals tend to underestimate the things that others do.

Encouraged by these experiences, we have expanded on the principle of presenting good news. At the entrance of our headquarters in Nuremberg, we now display all types of good news in our company as a wall projection. A kitchenette is next door. Whoever wants can spend a few minutes here before heading into the office. 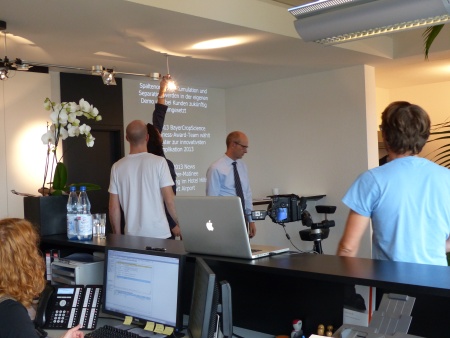 The making of (part 1): The architectural photographer Thomas Esch ensures that our news about handling good news is nicely packaged.

One question was a bit tricky: Where does good news start? At first, the big wins came to mind: Good standings in a BARC survey, the number of new features in the new version of DeltaMaster, a client whose solution won a best practice award for BI, a won tender, a large order, and so on. But then we realized how many other positive things occur, yet are never really publicized. 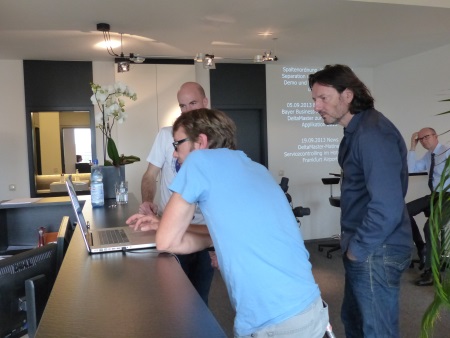 The models, our colleagues Bertram Küppers and Pavla Toff, take a break while we assess the image quality.

Of course, uplifting e-mail newsletters, company magazines, and the likes thereof are nothing new. We also hung a news portal in our office kitchenette. After all, making coffee gets boring quickly, and people then have time for the type of news that quickly goes under in an e-mail inbox. As a matter of fact, we truly feel the impact of selecting the right order. The start of the morning is not exactly what you would call an exhilarating experience for everyone. Nevertheless, most of our employees have a lighter step on their way to the office after they pass by our ticker.

I think that the theory and practical examples of this hysteresis effect should have consequences for financial controlling:

The most important thing is to always start meetings and reports with positive news. That’s why positive variances always come first in default setting for rankings in our software. On a more philosophical note, we also feel that controllers should see themselves as a news service for positive developments. The right information can be used to build motivation, which is just as important to counter missed targets as the skilled view to recognize them.