Back in the July edition of clicks! we explained how you can access the Web from DeltaMaster by creating hyperlinks in reports. But did you also know that you can also access DeltaMaster from any computer with a Web browser and an Internet connection?

In this edition of clicks! we will explain how you can publish reports to the Web or a corporate Intranet with the new DeltaMaster WebOption. As always, we would be more than happy to set up a Web conference – or a personal meeting – to demonstrate how you can bring your DeltaMaster applications online!

Using the new DeltaMaster WebOption, you can publish reports to the Web or Intranet in Viewer mode or below. As a result, report consumers only need a standard Web browser, such as Internet Explorer or Firefox, to open their individual reports. The differences are so minimal that you might not even see them at a first glance.

Here’s a sample briefing book in the Web: 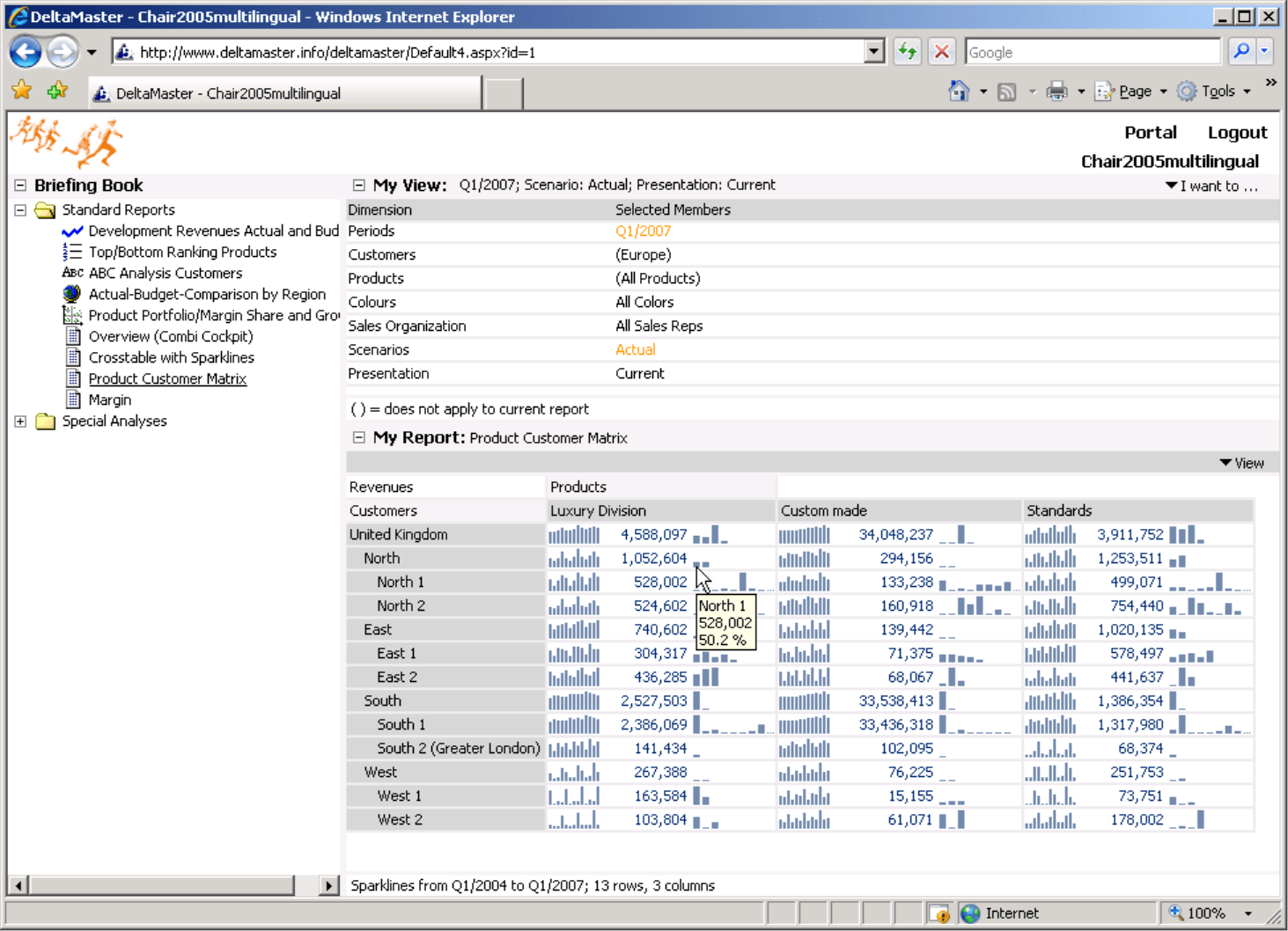 …and the same briefing book in DeltaMaster 5.3.2: 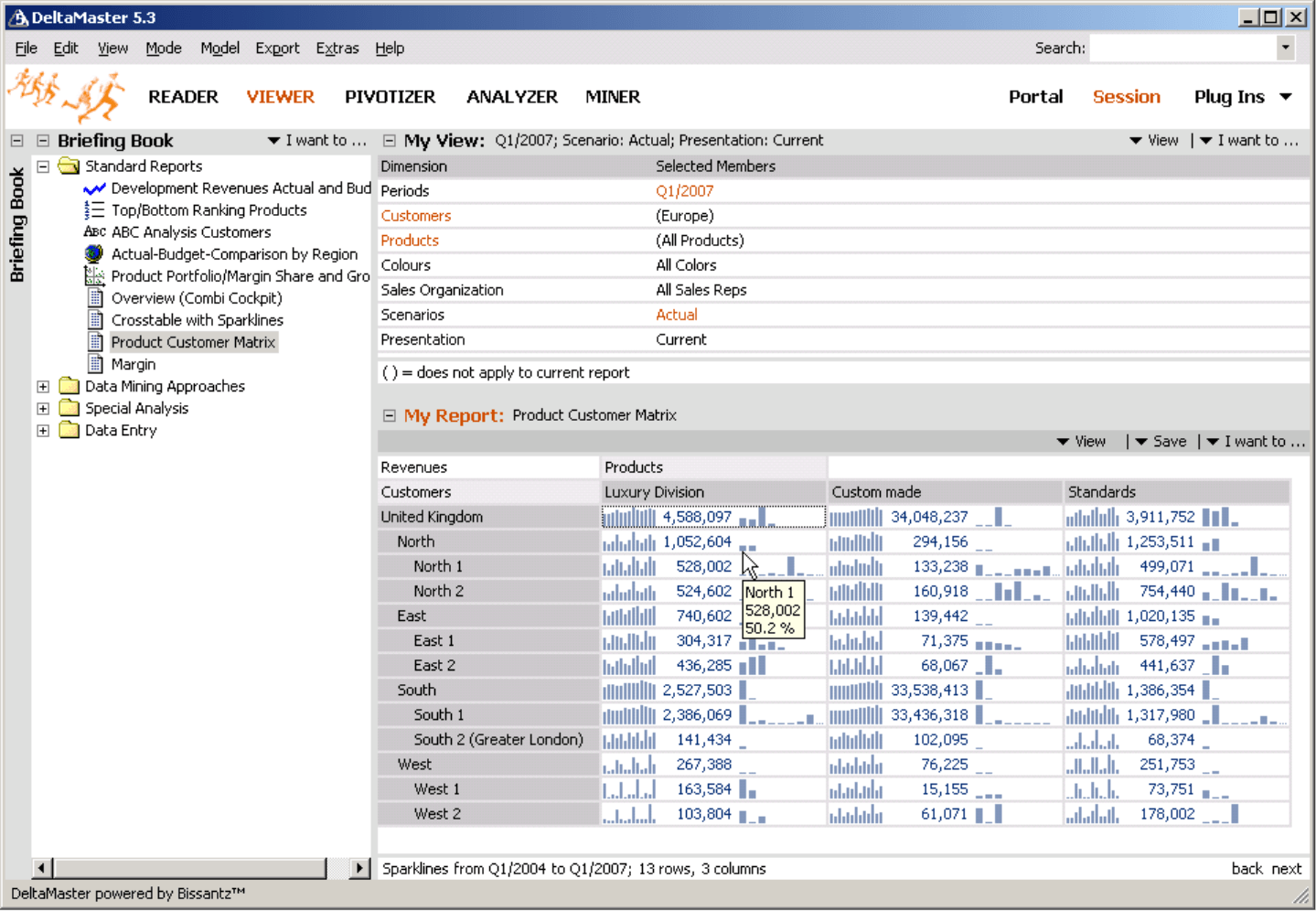 The fact that we even pose this question may surprise you, considering the omnipresence of the Internet nowadays. If you take a closer look, however, the Web is not the only way to fulfill certain requirements. Common reasons for publishing reports through the Web include:

At this point we will not go into further detail, because the best method for delivering access to an application ultimately depends on the individual requirements of your company. At any rate, it is good to know in advance that DeltaMaster will support your choice regardless if you select a Windows client, WTS/Citrix environment or the Web.

So, how does a report get from DeltaMaster to the Web? The following illustration shows the components that support this process and together comprise the WebOption. 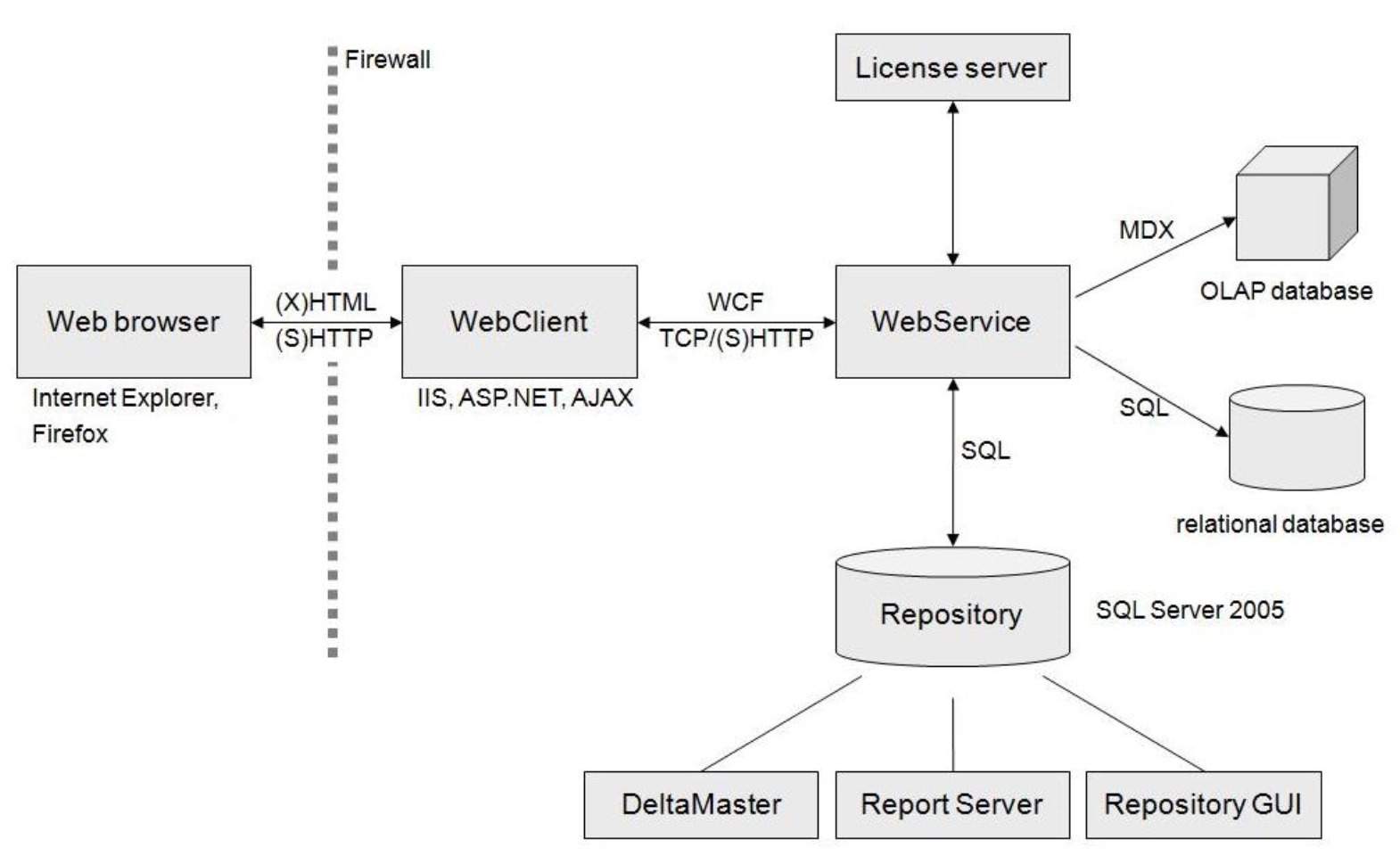 Let’s take a closer look at this diagram starting from the left to the right:

The DeltaMaster WebOption publishes reports to a Web browser; primary support is given to the market leaders, Microsoft Internet Explorer (Version 6 and higher) and Mozilla Firefox (Version 2 and higher). The reports are generated in pure HTML or XHTML files. Since the interactive interface is based on JavaScript, browser extensions such as Java, ActiveX or Flash are not necessary.

The WebClient generates HTML code and sends it to the browser. The name, however, is misleading, because the WebClient is executed on the Web server. Microsoft Internet Information Services (IIS), which is standard in all current Windows versions, operates as the server.

The WebClient receives the reports’ contents – measures, tables, charts, comments, etc. – from the WebService. The WebService, in turn, connects with the OLAP database and, if applicable, an underlying relational databas. In essence, the WebServer plays the same role as DeltaMaster in a conventional client-server scenario, for example, in querying the database, preparing results, etc. The names, therefore, refer to the distribution of tasks. The WebService delivers the WebClient with the report contents, and the WebClient generates the layout of the Web sites based on that information.

The diagram on the previous page also shows an additional database near the WebService. This Repository, which is set up in Microsoft SQL Server 2005, stores the analysis sessions (briefing books) that the users can access through the Web. When reports are distributed through the Web, the consumers directly access copies of the .das files (and not the actual files themselves) that were previously transferred into the Repository database using DeltaMaster or Report Server.

For report authors, the difference is actually quite minimal because they simply save the desired reports or analyses into a database instead of the file system. In DeltaMaster, the appropriate option is located in the File menu provided that you have a valid WebOption license. In Report Server, they simply select “repository” as the Report format and Distribution type. Although the .das file is not used for Web reporting, it will still be used for maintaining the model.

An analysis session that is transferred into a Repository is called an Application. 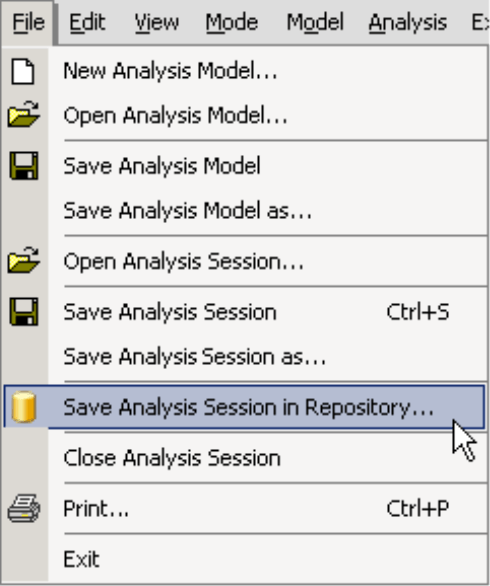 Roles, rights, applications: The repository and its GUI

In addition to applications, the Repository also stores the rules that state which users can access which reports. In a client-server scenario, the operating system, database or the network software usually takes care of this task. Since these concepts are not comprehensive enough for Web deployments, WebOption offers its own separate user administration which is managed through the Repository GUI.

Here, you can assign individual Roles to Users (or user groups) and determine which roles can access which Applications and on which level (e.g. Reader, Viewer, Pivotizer, etc.). 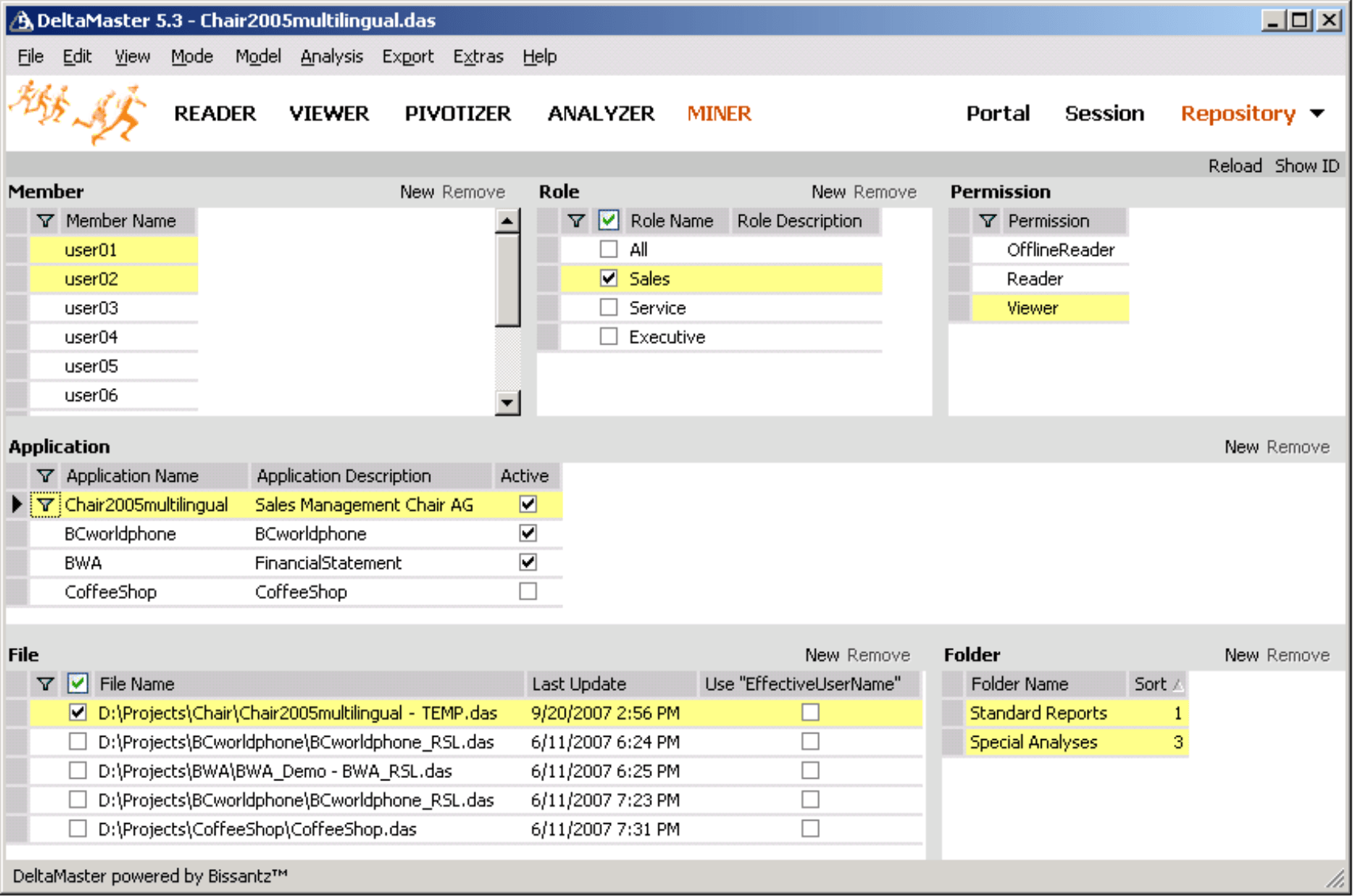 In the screenshot above, you can see the Web-based sales analysis application of our reference company Chair Inc. The “Chair2005multilingual” application is based on the checked .das file listed below. In particular, only the “Standard Reports“ and “Special Analyses“ – and none of the remaining folders – will be accessible through the Web. The application is only available to employees with a “Sales” role. The members “user01“ and “user02“ can use Viewer functionality, which means, for example, that they can also change the report view in the Web browser.

WebOption allows you to use analytic applications through a Web browser as well as directly in DeltaMaster as a client application in Windows. Both access methods occupy an Offline Reader, Reader or Viewer license. To enable Web access, you also need a basic license as well as licenses for the ports or actual web access.

Considering that each company has very individual requirements and usage scenarios for Web applications, we know that we could not have possibly answered all of your questions about the new WebOption in these few pages. So if you have any questions, please do not hesitate to contact your Bissantz team. We would be happy to explain how you can deploy your individual reporting applications through the Web.