Take a look behind the scenes or better, into our BI laboratory with a new series of articles. We have plenty of ideas on how we want to further develop our products. Creating user-friendly features from them is often an exhausting but always an exciting process. In selected projects, we will tell you how we make up our minds during this process. You will also learn which features you can look forward to in the next releases as a DeltaMaster user.

Uncertainty is an unpleasant thing while waiting. But is there any way to shorten waiting? How long does which step take? DeltaMaster is to answer these questions! How do we display this information and where? Can we use the cursor as a stopwatch? In this case, you would see the waiting time at the point where your eye has looked at recently. The cursor could easily turn into a number and we could count in seconds or tenths as most of the processes take less than one second. This sounded like a good idea, however, first tests quickly revealed a flickering of the cursor while working in remote area. Further, there was no display for performance, so we decided to disregard this idea due to inconsistency. A notification on the edge of the screen was a more decent idea, so we decided to use this option.

It is hard to read overlapping labels even with numbers for locations on a map, e. g. locations of customers and their deviation in sales. Locations which are close to each other, quickly lead to an overlapping of numbers and the more locations are nearby, the more unreadable it gets. But how can we avoid these overlappings? DeltaMaster should help to solve this problem and to calculate the location for a value automatically within a certain radius of the location, where no other label is placed yet. The value could surround the location and stop on a free spot. Nevertheless, our tests revealed that overlappings occur on many values which are very close to each other and at some time all of the free space of the map will be used. Another problem is the dedication. if the label of a location has no fixed position, the dedication is missing and it is not clear, which label belongs to which location. Therefore, another solution is to be found.

The finding: We can only avoid overlapping by reducing the labels and prioritize them. For example, If there are sales deviations of several customers, DeltaMaster should only indicate the value for the customers with the highest deviation. You can use this option from now on with the geo analysis-tool of DeltaMaster.

Until now, the position of the report list depends on the filter bar. This leads to inconvenient jumps to the top when switching the reports. How often this effect takes place depends on the loading time of the report. Also, reports with high filter bars clinch the report list. To solve this problem, we have to fix the report list. But where? Independent of the filter bar, on the upper left margin of the screen and always on the same position, seems to be a good idea. The same applies to the menu on the right margin due to the symmetrical presentation and better use of space.
Also, there are questions about the user interface-design: Do the symbols for the drop down menus need a change? Until now, the triangles for expand and close direct into the inner report area. Will it be irritating when these triangles direct to the filter bar and do we need three points in addition to indicate that there is something to expand? No! After turning the triangles to all cardinal points it gets clear, that we will stay with the same symbols as things will still work well how they did until now. We also have to avoid the overlapping of the triangle by the filter bar when the report list is closed with the following solution: the button will direct in the opposite direction. The new report list will work like it should from now on and will be available in the next release of DeltaMaster. 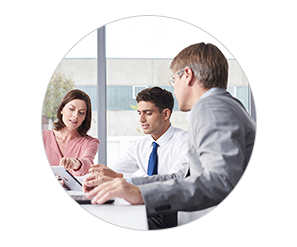 DeltaMaster-App for Android is now available at Google Play store. From now on it is possible to use applications and reports of the Business Intelligence software DeltaMaster with current mobile operating [...]