Setting rights for reports and folders

Different views for different users. In companies, when working with software and figures, people often need to work with the same type of information, but not necessarily with the exact same information or in the exact same way. Rights are the key to handling this. The same database or the same controlling application can have a different appearance and behave in different ways depending on who is working with it. In DeltaMaster, this applies to reports and folders in applications as well as to the applications themselves. We provide an overview in this issue of clicks! – with read rights for business users and the IT department alike.

First of all, good news: It is not mandatory to maintain internal rights for DeltaMaster. Each (server) database already has a rights concept. This is to ensure that everyone “sees” just the data intended for them. For example, it could be set up in such a way that each sales representative can access just the data of their own region, while the sales controller or Head of Sales can access all regions. For totals (aggregates), special rights can be defined in order to enable across-the-board comparisons (benchmarks). In many cases, data access is therefore already regulated in the database, and all that has to be done is assign the intended report recipients and report editors in DeltaMaster – the people allowed to read and the people allowed to write.

However, if the applications become bigger, if more people work with them, or if different tasks are to be performed, then it may be worth arranging the applications on a user-specific basis in terms of content. This is possible with DeltaMaster: by means of an internal rights concept.

You can see how this works by e. g. having a look at the report list of DeltaMaster. The same application is shown each time in the screenshot below, but from the viewpoint of three different user groups: a regional sales representative on the left, the Head of Sales in the middle, and Controlling on the right. 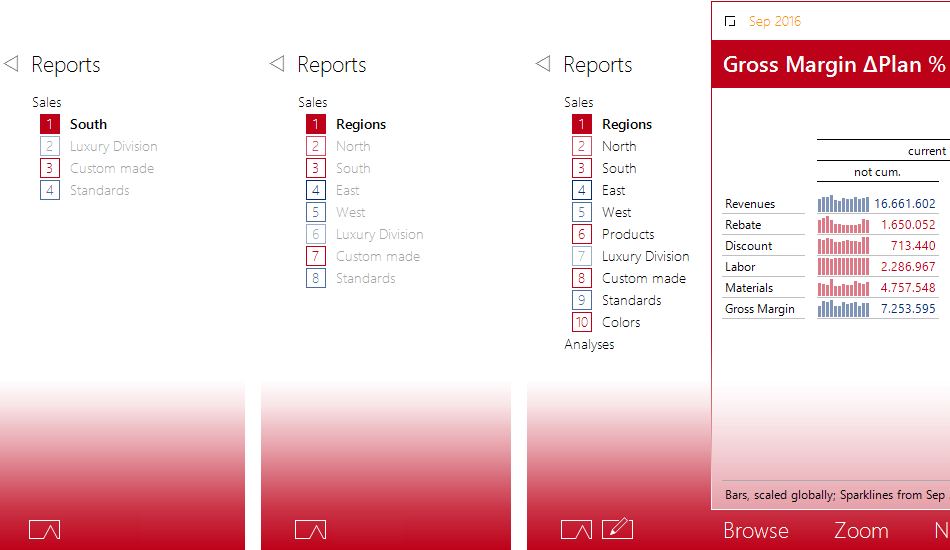 The report list sometimes includes fewer reports, and sometimes more. Another difference is the button with the pencil (at the bottom), which is used to switch from Presentation Mode to Modi-fication Mode. In the example, this button is available to just one user group, Controlling (on the right). The returned values are identical in all three examples.

As a matter of principle, permissions in the overall system of a DeltaMaster solution need to be defined at two levels: in the database and in the DeltaMaster application. The responsibilities are clearly assigned:

The database is decisive when it comes to maximum confidentiality, data protection, and data security. Common database systems provide sophisticated and tried-and-tested protection mecha-nisms for this purpose. These apply to DeltaMaster as well as to all other programs with which the database can be queried. DeltaMaster executes database queries with the rights of the current user or of the user stated at the time of logging in (with the WebClient, if this has been configured; i.e. impersonation). DeltaMaster cannot tell whether there are other users or which data they would see.

The rights concept of DeltaMaster is independent of that of the database. Its task is to control how the users can work in DeltaMaster with the data that they receive from the database in accordance with their database rights. The DeltaMaster concept in this case is geared towards the application. The focal points are efficiency, ergonomics, organization, delegation, guidance, and leadership – it is therefore more about who is and isn’t supposed to see what, and less about who is allowed to see what.

Corresponding to the division of tasks between database and DeltaMaster, rights for different types of object can be assigned with

I see what you don’t see

In particular, the DeltaMaster rights are used so that the same application has a different appearance and behaves in different ways depending on who is working with it. Here are a few example scenarios in which rights are beneficial:

Simple protection against unwanted queries can also be achieved through the resources in Delta-Master alone: Presentation Mode is the only mode available to users who are classified as report recipients. In turn, this mode can be restricted by the filter context in such a way that only highly specific data can be retrieved. However, this obviously only applies to DeltaMaster, not to other query tools. There¬fore, when it comes to insurmountable access control that also protects against malicious and technically adept users, the database is the first line of defense.

Two tools are available for managing DeltaMaster rights: DeltaMaster Role Management and DeltaMaster itself. The respective tasks are clearly delimited and facilitate the division of work between the IT department and the business department, as well as within the specialist department.

DeltaMaster Role Management (DeltaMaster 5: Repository GUI) relates to applications and user groups. This tool is used to assign users to groups, activate the applications that are meant to be available to a user group, and stipulate the role in which the group can work with this application, i.e. the scope of functions that DeltaMaster offers them.

If DeltaMaster is to apply rights within an application as well, activate the corresponding check box in the Files section. This makes it possible also to set rights for the reports and folders in this application. If the option is not activated, a simplified rights concept comes into effect for this application: User groups can be associated with the entire application in predefined roles (Report Recipient, Report Editor, Application Administrator, etc.).

If rights are to be changed and saved in an application, open the application via the options dialog box (context menu of a tile on the dashboard) and additionally with exclusive write access. In DeltaMaster 6, this access is also granted subsequently if you switch to Modification Mode in the already open application and no-one else already has exclusive write access. If you are a member of multiple groups, go to the Options dialog box and select the group you intend to work as a member of.

Directly in DeltaMaster, in the Windows client, set the rights that apply “within” the application, mainly for reports and folders. To do this, it is necessary to grant rights, as described above, and to have sufficient rights, for example because you are opening the application as the Application Administrator or have been given appropriate permission as a Report Editor. 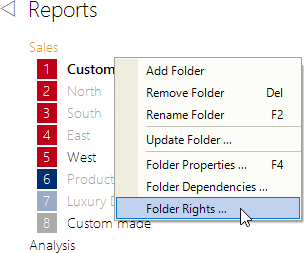 The rights for the selected report or folder are displayed in a dialog box (see the following screenshot), separated according to user group, and can be edited there if you have the corresponding permission.

Entries in brackets arise from inheritance (passing on), and those without brackets are set directly for the relevant object. Entries written in gray cannot be changed. This is always the case when there is no permission to grant rights, and when there are user groups with the role of Application Administrator (no rights can be taken away from them).

The following Rights can be set:

If you pass on the Assignment Mode, the settings are also applied to the contained reports and to (sub)folders. Passing on is not possible for reports.

To manage rights in DeltaMaster applications, it is necessary to have a central authority that checks which user is working with the system and, on this basis, decides which information and functions are to be offered to the user. This authority is the DeltaMaster Repository, a component for database-supported provision and management of DeltaMaster applications, rather than in the form of the familiar DAS files. No permission management is possible with these; only the Repository can do this. A general overview of the properties and tasks of the Repository can be found in DeltaMaster clicks! 01/2015.

Know what you’re doing before you do it

Many issues of clicks! end with an invitation simply to try it out yourself. Rights are an exception – there are reasons why only a few people in the company are entrusted with rights management. Although you cannot lock yourself out (DeltaMaster would warn against this), many and diverse interactions have to be borne in mind, and the more detailed the concept, the more interactions there are. As is so often the case, the simple solutions are the best. Just think of the database. In DeltaMaster, rights at application level are often enough – who is a Report Recipient in which application, who is a Report Editor, who doesn’t need to see them at all? If more detail is required, use a top-down approach. And this last tip is always useful: If there’s anything we can do for you, get in touch with us!

Adapting the filter context – selecting what can be selected