If lacking foresight has consequences, anticipation must be a virtue. In the era of big data, we are often reminded of that – for example, when we want to use data mining methods in financial controlling. Data mining profits from substantial computing power and suffers from too little of it. If you only occasionally search for patterns in your data, however, you don’t need a supercomputer. Instead of putting your faith into raw processing power, you simply need to identify the best place to apply the tool to abstract the knowledge from your data. That way, you don’t have to take all of the attributes that are generally available in a multidimensional database into consideration. If you know what is important in an analysis and what isn’t, you will be rewarded in the form of faster, clearer results. To determine the calculation scope in a DeltaMaster analysis, you can use the so-called analysis or model context. To learn how to work with this, simply look ahead on the next few pages.

Analyses and reports are comprised of two basic building blocks: measures and attributes (e.g. dimensions, hierarchies, levels) which you use to analyze and report the measures. For many analytic tasks, you don’t need to investigate every possible combination of measures and attributes – just a few select ones. In a sales analysis, for example, you don’t always need to examine the most granular level of data (e.g. individual customers); a breakdown by districts or regions may suffice. In a variance analysis, on the other hand, you may want to examine several attributes at the same time. Depending on the report’s purpose, however, you might be able to exclude some attributes such as sales channels or product types from the start.

In cases like these, it may be beneficial to exclude any combinations of measures and attributes that are technically possible but irrelevant for the given correlation. This is due to several factors:

In DeltaMaster, you can flexibly adapt how measures work together on one side as well as dimensions, hierarchies, and levels on the other. This concept is called the “analysis context” or, in its global form, the “model context”.

The analysis context is the total amount of attributes which you can use to examine a measure. The database determines the “maximum” analysis context. In cubes or measure groups, the measures are assigned to dimensions, hierarchies, and levels. These classifications in the databases are also valid in DeltaMaster. If a measure in the database is not linked to a dimension, you cannot analyze this measure based on that criterion.

You can modify (i.e. limit) the analysis context in two places: the Measure properties, as shown in the screenshot on your right, or for specific reports in certain analytical methods. The model context, in contrast, applies to the entire analysis session, but we will discuss that separately later on. 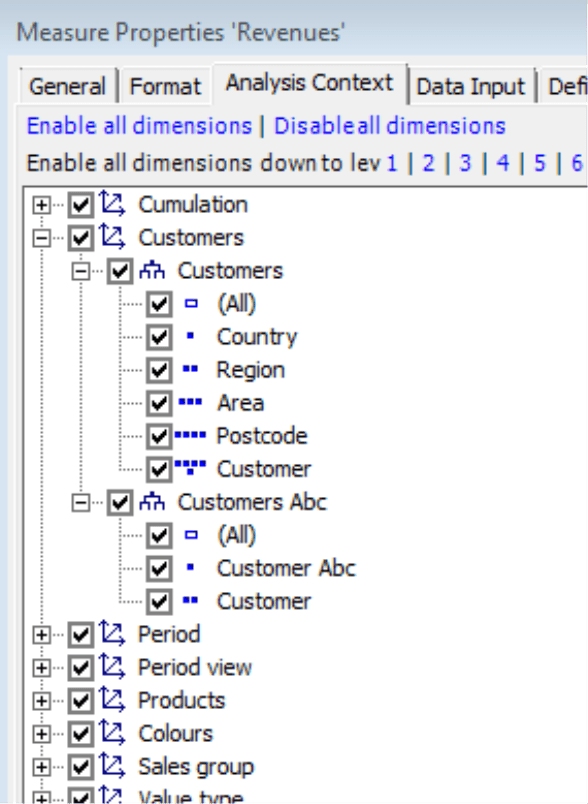 Editing the analysis context in the measure properties

In Pivotizer, Analyzer, and Miner modes, you can modify the Analysis context by opening the respective tab in the Measure properties. This will show all of the dimensions, hierarchies, and levels within the analysis model. Dimensions are marked with the symbol “

If a dimension is displayed in gray, the measure is not linked to that dimension in the database (e.g. it belongs to a different cube or another measure group). Our “Chair” demo application, for example, contains detailed sales figures as well as less granular P&L and balance sheet data. These measures, however, cannot be further broken down e.g. by customers, products, colors, or the sales organization. To show this, DeltaMaster displays these attributes in gray type. In addition, it will color any levels that are deactivated in the model context in gray type as well. 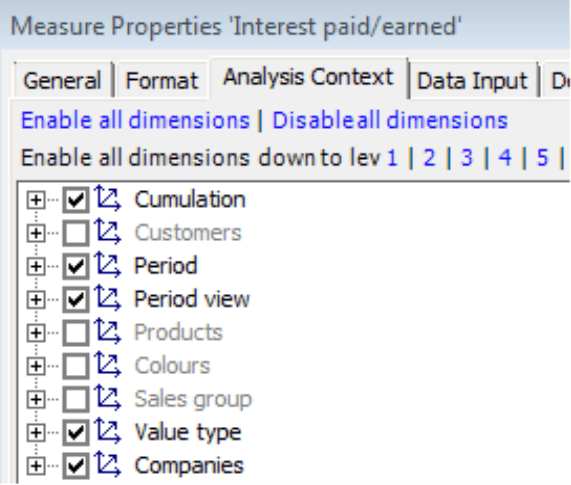 You can activate or deactivate an entry by clicking the respective check box. As soon as one level is activated, DeltaMaster will automatically activate the hierarchy and the dimension that belongs to that level. Conversely, DeltaMaster will automatically deactivate the hierarchy and dimension as soon as all of the levels are deactivated. You can also activate levels that are not directly next to each other, for example, “Region” and “Customer” in the screenshot on your right.

So how does a limited analysis context affect your analyses? To explain this, let’s create a new measure called “Revenues 2” and deactivate the “Colours”, “Sales group”, and “Companies” dimensions as well as the last two levels in the “Customer” dimension. 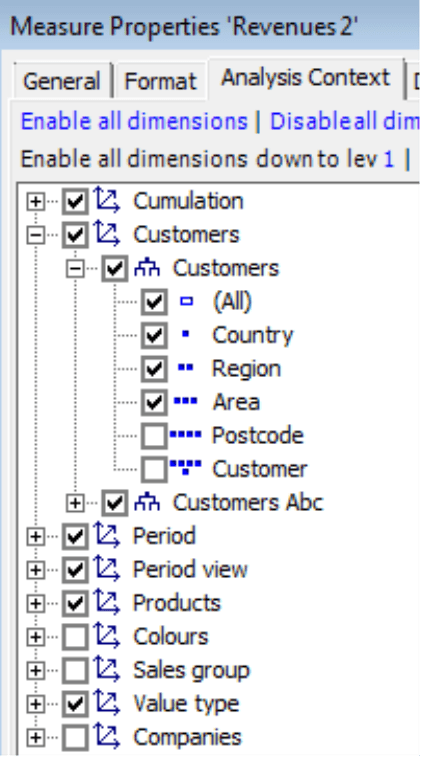 When you deactivate these dimensions, DeltaMaster will ignore the respective dimensions, hierarchies, and levels as if they didn’t even exist.

One effect of the limited analysis context is easy to recognize when you use the measure in an analysis method, for example, a Ranking.

Since DeltaMaster removes the deactivated dimensions and levels from the hierarchy menus, the menus are shorter and tidier as a whole. This behavior applies to all analytical methods in which a user can select the dimension, hierarchy, or level for calculating the analysis. 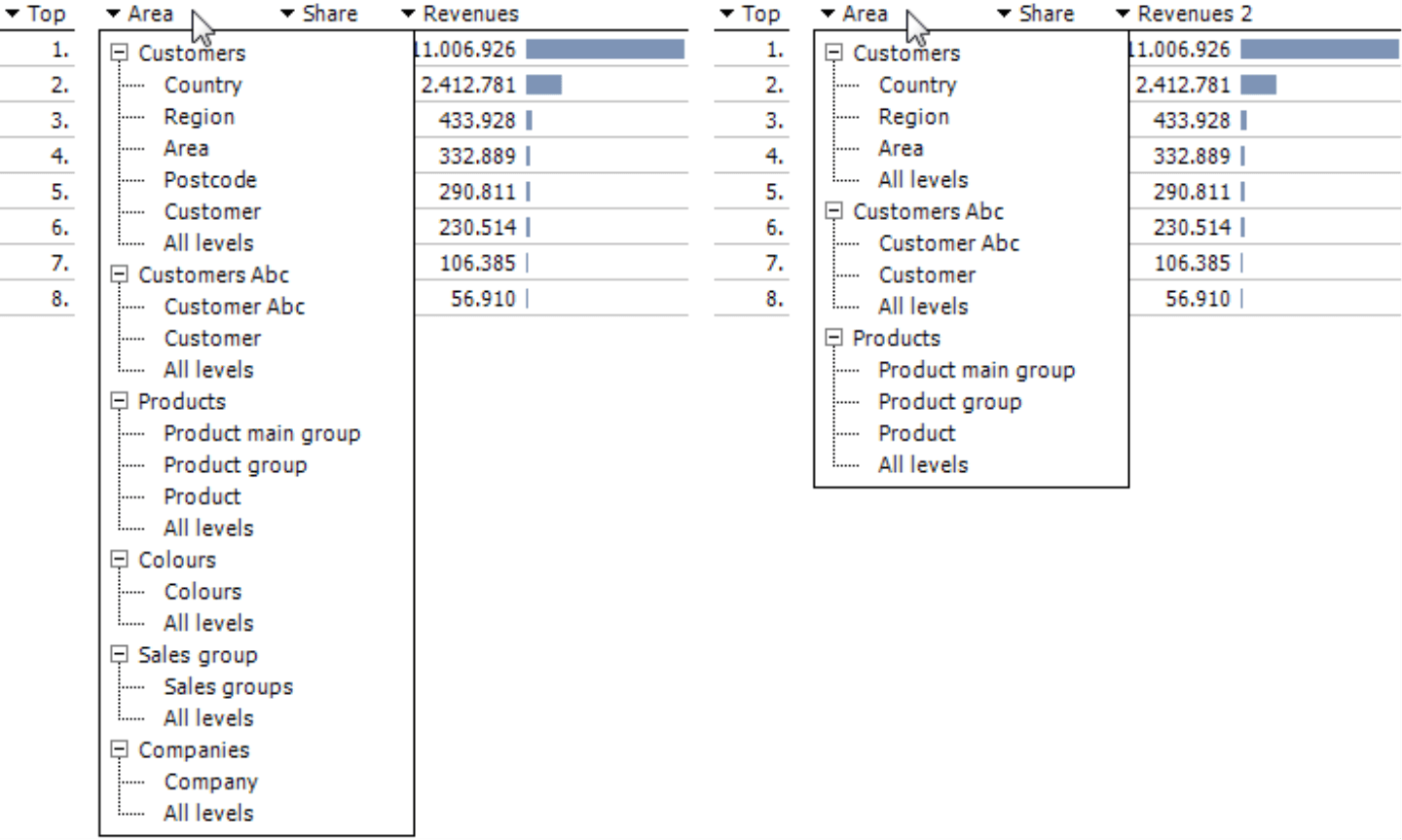 DeltaMaster also removes deactivated dimensions and levels from the pivot navigation (Analyzer and Miner modes). In addition to hiding them in the context menu (e.g. as part of a manual navigation), DeltaMaster also ignores them in the automatic navigation. You can also limit the analysis context in combination with dimension members such as the budget variance (i.e. “act-bud”) in the screenshot above.

Some analytical methods work with multiple dimensions at the same time. The most commonly known example is a PowerSearch, which you can use to create multidimensional rankings in DeltaMaster (see DeltaMaster clicks! 02/2007 for more information). This method scans multiple dimensions, hierarchies, and levels to find the largest and/or smallest members and sorts them one after the other so that you can quickly detect the causes behind relevant variances without having to check one criterion after another. 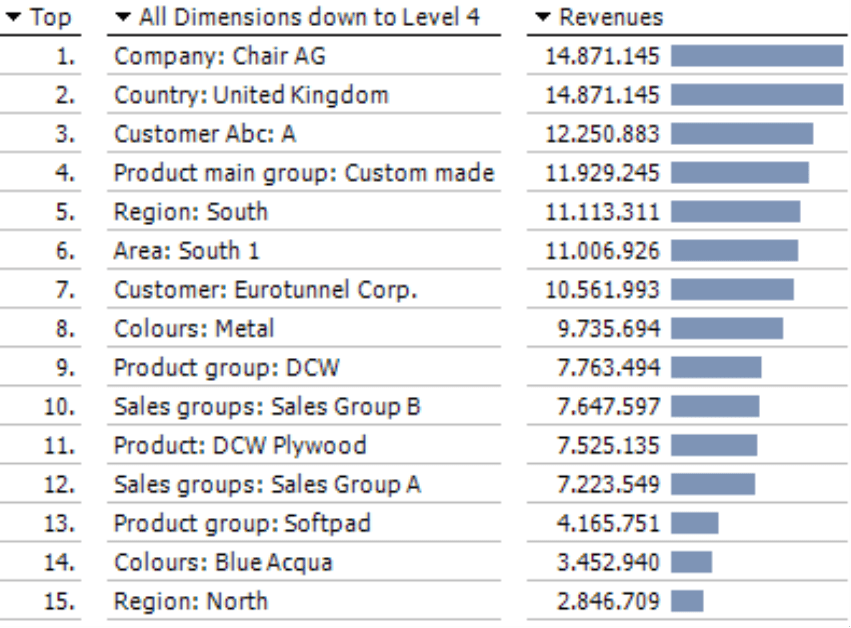 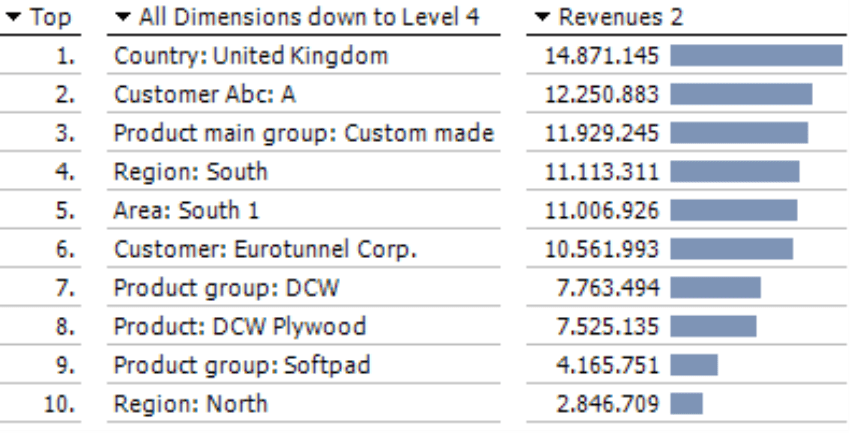 At a first glance, you may wonder why a customer is listed in “Revenues 2” (#6). Hadn’t we deactivated the customer level when we created this new measure? Yes, but in this case there are two customer hierarchies: a regular one and a virtual one that was created with a Concentration Analysis in DeltaMaster. This second hierarchy is included in the analysis context of “Revenues 2”, and this entry stems from it. In most cases, this is also the reason why the same objects can appear several times in a PowerSearch. You can tidy up the reports by editing the analysis context.

Analysis context of measures: Not valid in pivot tables or the view

As the name suggests, an analysis context that is defined in the measure properties affects analyses – and not pivot tables or Flexreports. DeltaMaster, for example, can still display attributes that are deactivated in the analysis context on the table’s axes. In addition, the limited analysis context of measures does not pose any restrictions for the View window. You can still access deactivated dimensions, hierarchies, and levels and select their members just as you normally would.

Analysis context in the Hyperbrowser

To use this feature, go the Properties in these analytical methods and select the Analysis context tab. This works and reacts very similar to the Analysis context in the Measure properties. Instead of displaying all of the characteristics, however, it will only show those that 1. are within the context of the measure to be examined and 2. are not restricted to a base member (leaf) in the View window. That means that DeltaMaster automatically deactivates (i.e. does not offer) any attributes that were already deactivated for the measure or that you cannot break down any further due to the current View settings. 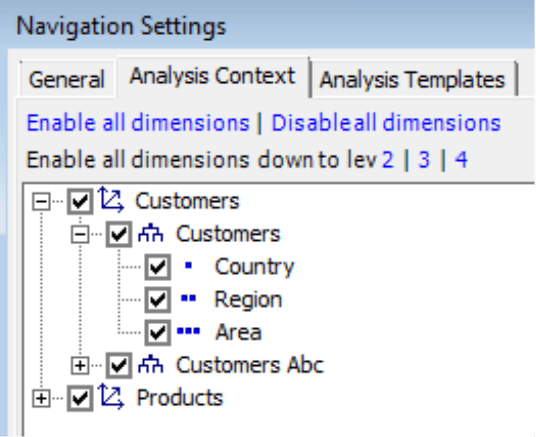 Please note: In a PowerSearch, DeltaMaster will only display the Analysis context tab in the Properties if it should explicitly calculate the analysis According to [the] analysis context. This entry is located at the very bottom of the hierarchy menu.

In a Comparator, which works with two measures, the “overlap” is decisive. A report-specific analysis context only offers the attributes that are contained in the analysis context of both measures. For more information on how you can use Comparator to track down allocation differences, please read DeltaMaster clicks! 11/2007.

In Miner mode, you can also define the Model context (Model menu), a general analysis context that is valid for all measures. Many users work with thex model context to exclude dimensions that are pending approval or had to be transferred from a predefined data model although they aren’t required for the application. By deactivating these dimensions, you can ensure that DeltaMaster doesn’t get “tied up” and, therefore, waste time with unnecessary calculations. 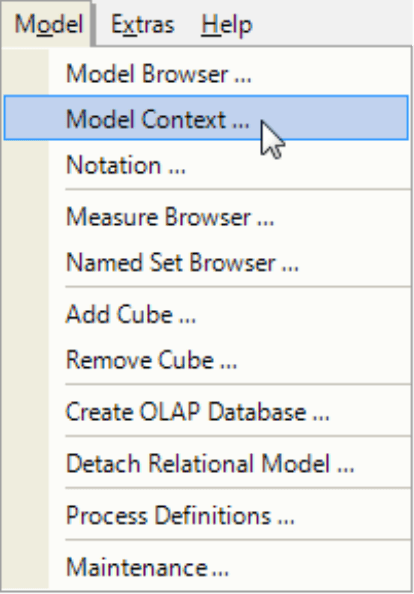 This dialog box has a similar setup to the others. If you activate the check box on the bottom corner of the dialog box, you can Reset [the] results of existing analyses and reports to empty the report cache. 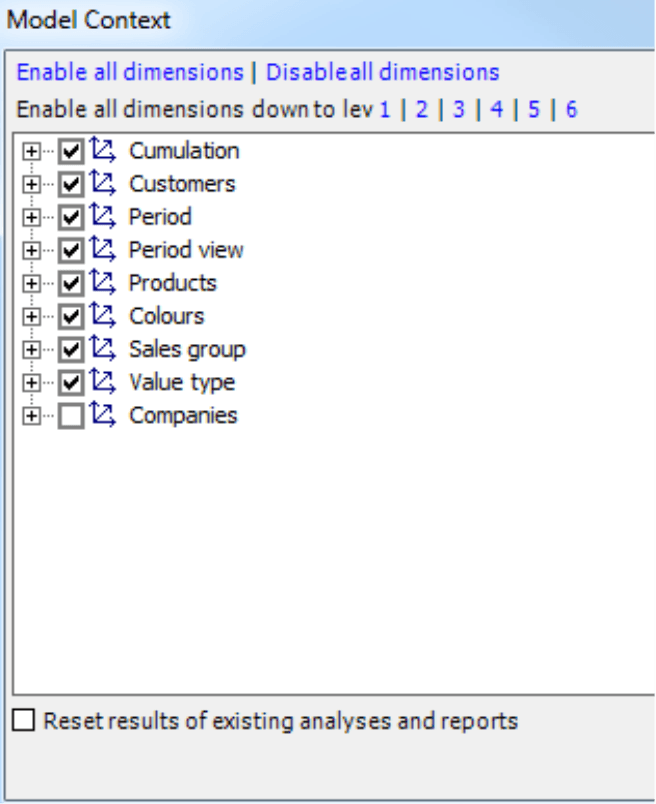 Efficient clicks – Threaded Analyses and more with a double click