Controllers are bean counters. So what? Someone has to be – and it’s better that it’s done right. I believe that a good entrepreneur always excels at bean counting as well. That’s one thing that they have in common.

At controller conventions you often see presentations with titles such as “Controlling – Just for Show or Something More?”* or “Controlling and Risk Management: ‘Number Crunchers’ and ‘Business Blockers?’” **.

You could think that controllers are an uncertain group of people who constantly have to assert the value of their work. That’s where the seafaring metaphors come in. The controller is a pilot, navigator or helmsman – nothing, of course, of a lower rank.

I personally think it is a fish tale. The CEO steers, pilots and navigates – not the controller. The pilot imagery is a bit tilted. It’s not about using a compass to keep a business on its targeted course. To anticipate where the water might suddenly become shallow – where others might unknowingly sail into trouble – and change direction sometimes carefully, sometimes courageously, that´s the manager´s job. Few, however, scramble to do so.

The controller is the person manning the sonar equipment. How much water is below the body? What was the past course? What lessons have we learned? Planning and simulation show if all is clear – or a collision is dead near.

Let’s head back to land. Management control is about counting beans. Entrepreneurs that don’t have their own controllers do that themselves – every single day, in fact. I did it as well at the start of my career – with passion, I may add. At the end of each day I sat silently in a corner for at least an hour and counted and calculated until I was certain that no ill will was lurking and that we had enough beans available to run the business. 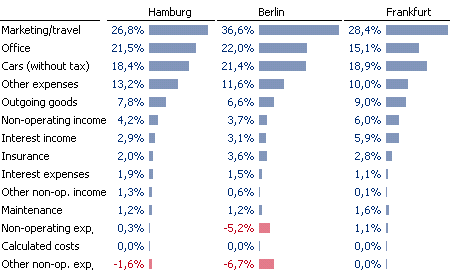 Cost center analysis: You could find clues on cost-cutting potential by examining the differences within the profiles. That is, of course, if you counted the beans carefully and your data is accurate.

Entrepreneurs know their numbers. They know what they have in the bank, which invoices were written and which have been paid. They are extremely picky in this respect and would never, ever think that diligent accounting, planning foresight and sharp pencils could somehow be non-seamanlike, pardon, I mean old-fashioned or dispensable.

It’s almost a paradox: Controlling will lose its right to exist when people stop counting every last bean. A customer recently told me about a cost-cutting project in which several comparable cost centers throughout the company were put under the microscope. It soon became clear that the different cost centers booked the same costs under different cost types. He was devastated. Rightfully so. That type of support won’t help you steer a paddle boat. The posting rules were corrected. Now when the company spots conspicuous data, it knows it needs to take action – not just in its accounting but also in its management.