It’s often the little things in life that make a big difference. How on earth did we ever survive back in the days before Blackberries, one-button coffee makers, or our beloved iPods? These and other modern necessities have one thing in common. They simplify our lives by saving us time or using it wisely. After all, everyone has it – but most of us would like more. And until someone invents a way to get more than 24 hours out of a day, it’s all about finding new ways to save a few minutes (or seconds!) wherever possible.

DeltaMaster, too, has many little amenities that save valuable time in analytic reporting. That’s why we won’t waste another second of your time to introduce yet another practical, time-saving feature – namely, time-analysis members!

Regardless of the analysis model in use, we often find ourselves on the pursuit of changes over a period of time. We may compare current revenues to the previous month or year, contrast the capacity utilization of the current quarter to the previous one or analyze the cumulated personnel costs of the current and previous years. To support us in this task, DeltaMaster offers Time analysis members, which we can define on an auxiliary axis (i.e. dimension) under names like “Presentation”, “Period view” or “Time utility“. With its help, you have a second “switch” to access other time periods from the current one as well as to investigate variances or aggregations.

The cockpit to the right shows gross margin figures for June and May 2007, their absolute and relative variances as well as the figures and variances compared to the same period a year ago (June 2006) for our fictitious company “Chair AG”. The period references in these columns are based on the time analysis members from the presentation dimension and were selected and arranged in the Axis definition of the pivot table.

The advantage of time analysis members is that all measures are only stored once as “current” (i.e. period values) in the database. As a result, we can cope with all other time-based operations directly in DeltaMaster and without needing to access the database. With this commonly practiced modeling trick, we can analyze every measure in our model over time with one go – and we do not need to create filter values or other individual measures. As a result, the example above gives us an overview of all KPI’s including the calculated “DeltaMaster measures“ for net revenues and margin. The only requirement is that one of the dimensions must be marked as a time dimension. If we have not done that already, we simply need to set Time as the Dimension type (in context menu of the respective dimension in the My view window).

We recommend allotting a separate dimension, which we will call “Presentation”, for period references in the data model. (In theory, all other dimensions could accommodate time-analyis members, but such a model design is not recommendable as redundancies would be inevitable.) This type of presentation dimension usually only has a single member, such as “current” or “period value”. 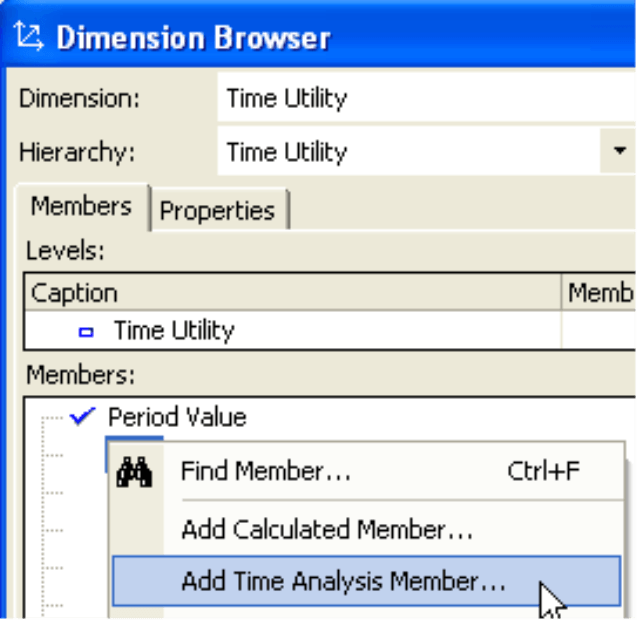 To define the Time analysis member, we use the editor called from the context menu or the I want to… menu of the Dimension browser. Here we can create multifaceted references to other periods. 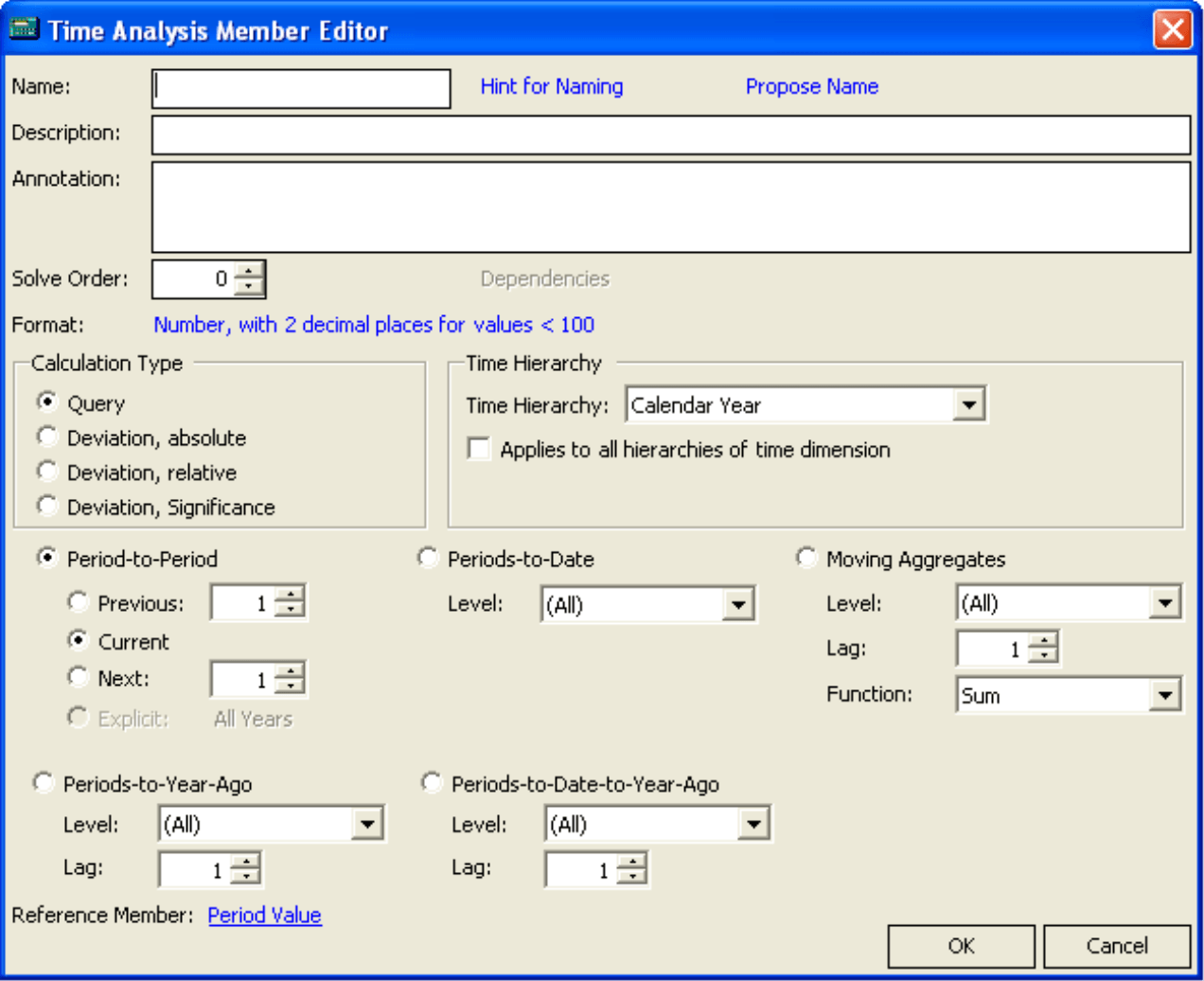 We will need to enter a Name, which can contain variables that DeltaMaster replaces with the referenced period when displayed in cockpits and reports. This function will be explained in detail on page 5.

The Annotation and Description, which is displayed as a tool tip in the Dimension browser, can be used for documentation. Solve Order determines the sequence of the calculation, which can play a major role in some cases. The settings for this parameter depend on the underlying database. The Format of the displayed numbers (e.g. the desired number of decimal places) is also set in this dialog box.

Time analysis members allow us to access other time periods from the current one. A “time period” can be a month or a quarter; it simply means any member on a time axis. There are four calculation types for accessing “parallel” time periods:

In the lower part of the window, we determine the element to be referenced by the Time analysis member. The idea is always to “shift” in relation to the time period selected in the time dimension.

Period-to-period values and deviations can also be calculated when several time periods are selected in the view (multiple selection).

We can add variables to the names of time analysis members to improve the readability of our reports. Instead of abstract column headlines such as “Current” and “Last month”, DeltaMiner would list ”August 2007“ and “July 2007”. The following table shows the list of supported variables.

If desired, DeltaMaster can automatically Propose a name: the selected calculation type and the period reference will be taken into account for this. The recommendation for relative variance compared to the previous period, for example, is “{cp} ./. {pp1} %“, which would, for August 2007, translate to “2007_Q3_8 ./. 2007_Q3_7 %“ using the terminology above. This type of labeling is much more informative than simply saying “Variance to previous period”. If we defined a rolling aggregation with a gap of 3 and the function “average”, DeltaMaster would suggest the name “Ø ({pp2} through {cp})“ and the report would display “Ø (2007_Q2_6 to 2007_Q3_8)“. Due to the longer names, the columns in the pivot table will be wider. We can prevent this effect, however, by adding two empty spaces in the name, which will prompt DeltaMaster to create a line break in the pivot table. This trick was used in the first illustration on page 2.

If the period offset leads to elements not available in the database or the variables cannot be resolved for some reason, DeltaMaster will display a substitute caption, which is stored under Extras, Options, Presentation.

These placeholders are available in: 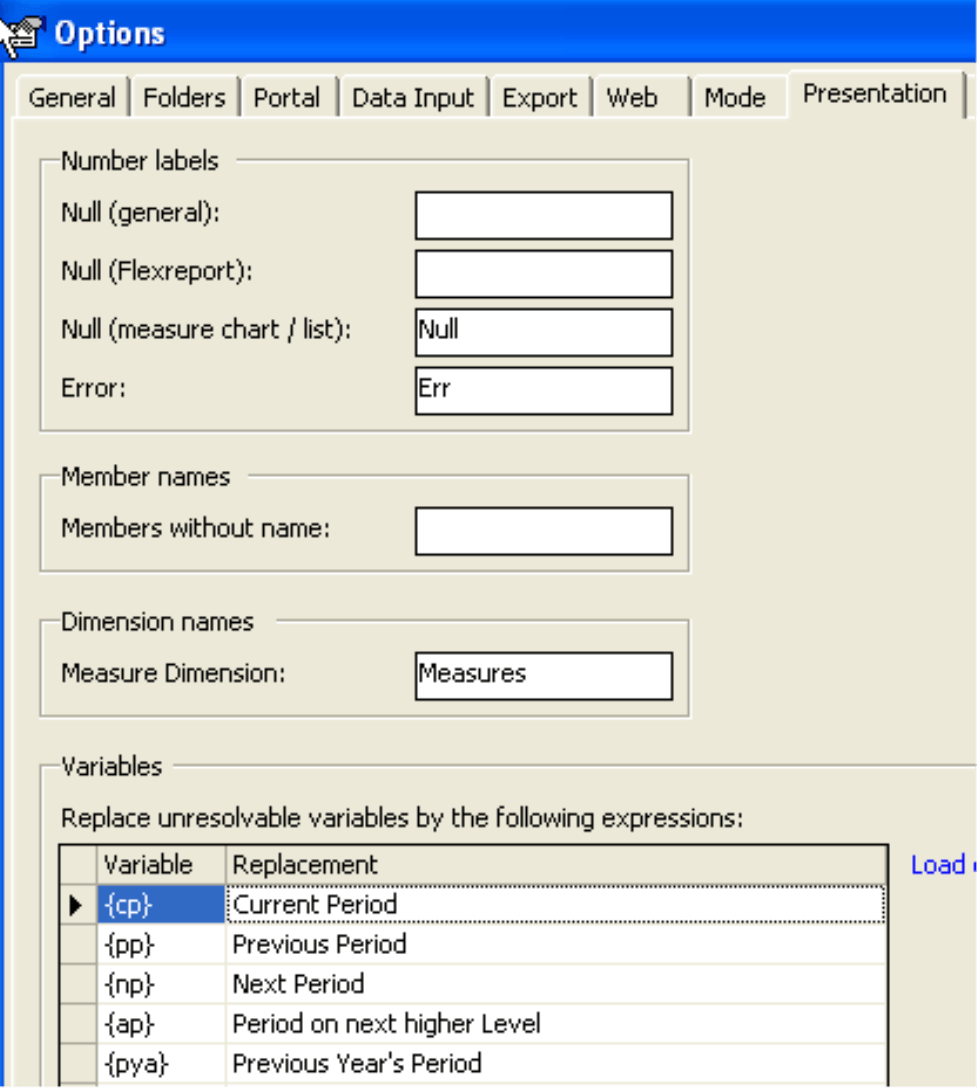 Multiple hierarchies in the time dimension

If a time dimension contains several hierarchies, it makes sense to create Time analysis members for all Time hierarchies. In this case, the editor for Time analysis members contains a separate area in which we select the hierarchy in which the calculated member should be valid, or if it should apply to all hierarchies, no matter which of them is currently active. For the latter option, the hierarchies need a similar structure, i.e. the same number of levels and an identical lowest level (e.g. months).