Using DeltaMaster App offline on an iPhone or iPad

If you are frequently on the road, you have probably noticed that the latest smartphone or sleekest tablet is only half as fun when you have no network service – and that seems to happen more often than your provider advertises. A network by its very nature, how­ever, primarily consists of holes. That’s why the offline capabilities of mobile solutions are so important: If you want to be mobile, you need a solution with strong offline capabilities! With DeltaMaster App for iPhone and iPad, you are well equipped. You can download reports or entire applications to these devices, take them with you, and access them on the go – even if you aren’t online. Once you have your reports in DeltaMaster App, you can enjoy your beloved Apple devices with or without a network connection.

In the previous edition of DeltaMaster clicks!, we introduced our app for iPhone or iPad devices. This app, which was launched with DeltaMaster 6, primarily works online. In other words, it pulls data fresh from the database. This gives reports and applications on an iPhone/iPad the same dynamic, interactive capabilities that you know from DeltaMaster. Users, for example, can update reports (i.e. refresh from the database), add filters, display details in Graphical Tables (pivot tables) using drill-down functions, open links and even zoom (Semantic Zoom) and navigate (Pivot Navigation). The app, however, is also designed to support offline usage.

The app has both an online and offline mode. You can see which mode is active by glancing at the antenna tower icon in the upper-right corner of the app. The app is online when waves appear at the top and offline when they do not. Tap the symbol to switch from one mode to the other. In online mode, you can access all reports and applications based on your permissions in the repository. In offline mode, you can use any applications and reports that you previously downloaded to your iPhone or iPad. In order to use the app in offline mode, therefore, you must first save the desired reports or applications to the device while you are still online.

icon at the top of a report.

In the list, tap and hold the report until a context menu appears at the bottom of the screen. Here you can download the report for offline use.

This works the same way for folders such as “Sales”. If you tap and hold a folder, the menu will appear and you can download the folder, including all reports that are contained in the folder and its subfolders. This way you can quickly save several reports to your device at once. 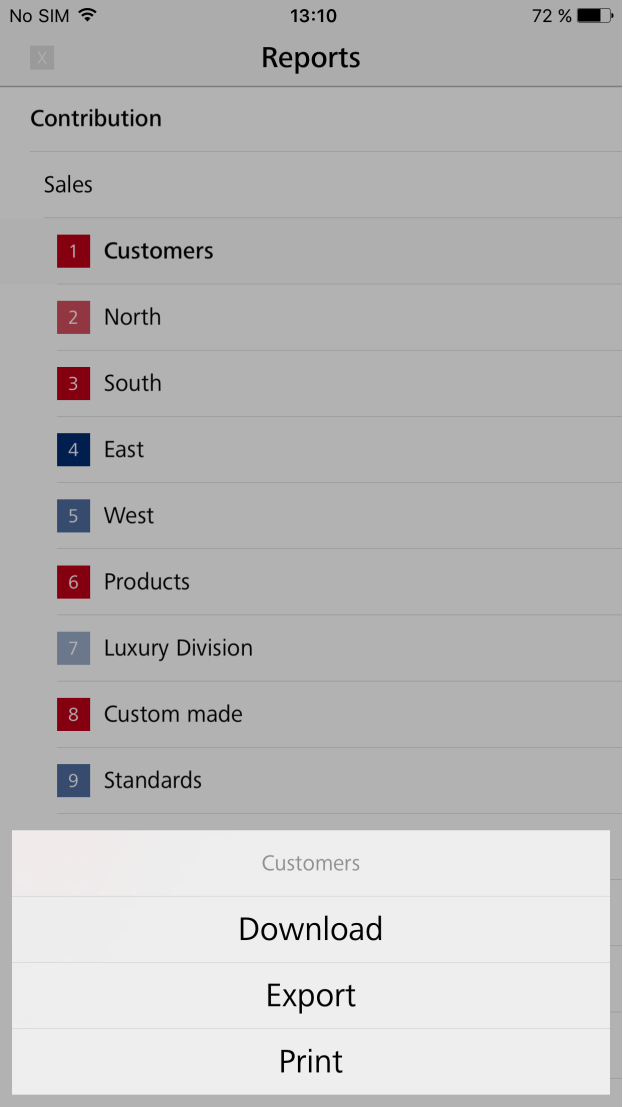 The app designates downloaded reports with a small save icon to the right of the report list. In the case of folders, it will only mark the folders themselves and not the contained reports.

You can save applications to your iPhone or iPad in the same manner: Tap and hold the tile in the dashboard until the menu appears to download the application. Once you have downloaded a report or application, the context menu will contain two additional commands. Update reloads the report or application from the server and saves it to the device. This includes the definitions, structures, and values. Remove deletes the local copies while making no changes on the server side. In order to update, the app must be online. The remove function also works offline. As long as you are online, the app will not use the reports and applications you have downloaded: In online mode, the app ignores the downloaded versions and always pulls the data directly from the server.

In offline mode, the app will access the downloaded versions. To switch to offline mode, tap the antenna tower symbol in the upper-right corner. The app displays a menu which you can use to go offline. You must activate offline mode explicitly. Turning of the Internet connection or doing something similar will not automatically switch the app’s mode.

Now you can only access the downloaded reports (numbers 1 through 5) from the report list. All other reports are grayed out. 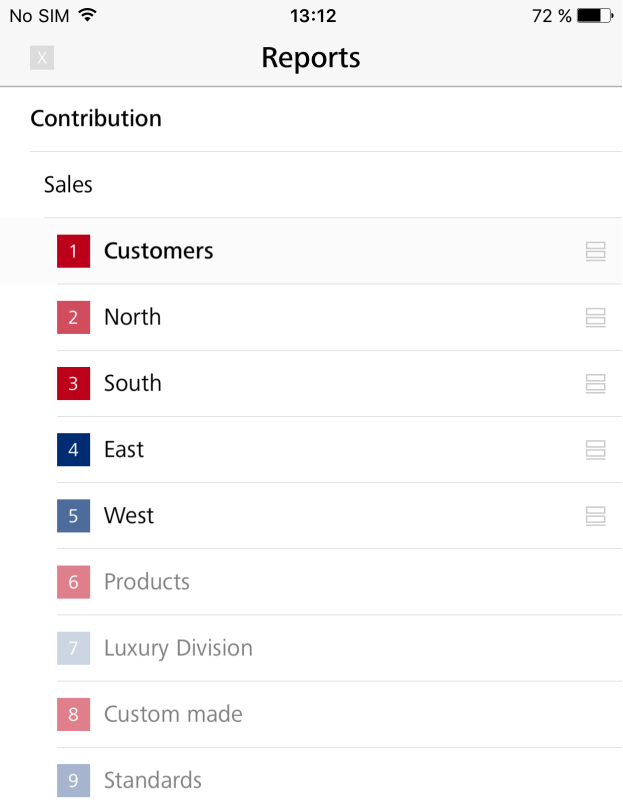 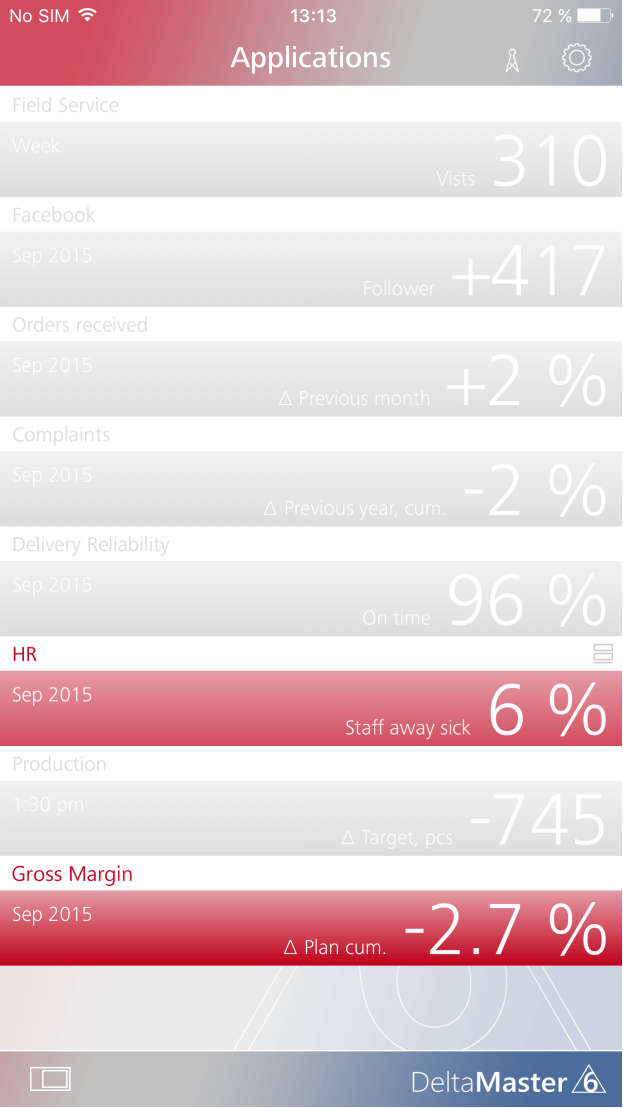 Five functions of the app are not available in offline mode: Changing a filter, opening links, drill downs (expanding/collapsing) as well as the Zoom and Navigate functions in Graphical Tables all require an online database connection.

Online mode is also required to export reports as PDF files or to the formats of Microsoft Office (i.e. Word, Excel, PowerPoint) because the respective files are generated on the server before the app saves them to the device.

If you have not yet installed DeltaMaster App, you can download it free of charge at the app store of Apple. The easiest way is to simply scan the QR code on your right with your iPhone or iPad. This code or the address appstore.com/deltamaster will direct you to the app’s homepage in the store. Alternatively, you can search the app store using the keyword “DeltaMaster”.

Test it in our demo system

If you aren’t yet able to access your DeltaMaster applications with an app due to the way they are currently deployed, you can use ours in the meantime! We have configured a demo system so that you can get familiar with the app based on sample data.

The QR code on your right will take you directly to https://www.bissantz.de/#demo-registration , where you can request your personal login and password for the demo system. We will then send your login information as an email. Ideally, you should open this email on your iPhone or iPad. Otherwise, please forward it to these devices. If the app is installed on the device, you can immediately open the configuration file (DMSETTINGS), which is sent as an attachment with the email, to enter all settings automatically. Currently, the registration page and the demo application is available in German only.