“information logistics“ is yet another buzzword that has emerged in the software industry. For the most part, this term will be explained roughly like this: It’s about delivering the right information to the right users at the right time in the right format. As simple as the formula sounds – being dedicated to data analysis and communication of its results, you know that there’s hard work involved.
In this DeltaMaster clicks!, we’ll be focusing on a module that can be a great help in this context: ReportServer. Our component automatically deals with the tedious task to duplicate and tailor reports for a large flock of recipients, so that there’ll be more time left for you to tackle the more gripping things.
As always, your contact persons from our crew will be there for you when you’re interested in more details.

All the best,
Your Bissantz & Company team

Almost every company uses standardized reports that are always built in the same way and only differ in the displayed perspective and detail of data. So, for example, the head of sales gets a monthly score of results for all his sales representatives. The latter receive reports identical in structure but limited to their respective sales region. The analytical editor in charge of providing his “audience” across the enterprise is time and again faced with the unpleasant task to create and update variations of existing base reports for various recipients and intentions. For these matters of duty, we recommend ReportServer.

ReportServer is an additional component for DeltaMaster that automates routine tasks like updating, changing, duplicating and distributing saved analysis sessions (.das files). Our clients use it to

and much more. Saved analysis sessions and their contained briefing books serve as master copies for ReportServer.

All instructions about what to do with an existing report in order to derive new reports from it are pooled in so-called jobs. These jobs may be run at the touch of a button or via other programs. This allows for a fully-automatted report generation if you use a scheduling software that runs jobs based on time or events. The “Scheduled Tasks” tool alone, which is part of every standard Windows installation, is sufficient to create and distribute reports without the need of any manual intervention or even a user login.
To define job packages, start ReportServer in interactive mode. After installing the component, there is a new button in DeltaMaster’s Plug-ins tab to reach ReportServer. The same module is responsible for the automated job execution, but then it will run in a mode without a user interface and thus can be called from the system.

The ReportServer screen shows the existing jobs that are stored in their own definition database. Below, the settings for the selected job are displayed in the Report Update, Report Folders and Report Generator windows. Here the contents of the reports that will be created are defined in detail. It is allowed to involve several objects in the same job, thus the seperate windows.

The paramaters that have to be provided once per job, however, constitute the definition “header”.

You can compare the window arrangement with the “input-processing-output principle”: In the header, input (underlying DeltaMaster session, login information for the involved databases) and

output (destination address and format) of the job are determined, whereas the processing options for updating and iterating the reports can be found further down.

Additionally, the Report Folder Generator is ready via the Settings link (not shown here).

For each job, you determine the format to be created:

ReportServer will process the created documents according to the option selected in the Distribution Type field: They will either be saved as files, for example on a server in the local network or in the corporate Intranet, or sent via email. The destination is determined in the Address field in the Jobs window. (In this context, we consider an Address a generic term for path/filename with the File distribution type, and email address with Mail.) 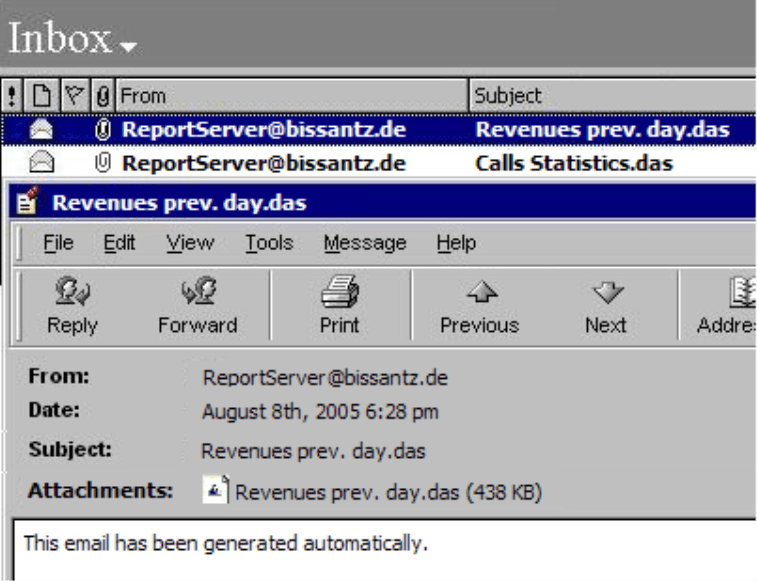 Which are the Top 10 customers of each sales representative
and which 10 products have been requested most
by their respective customers?

The ReportServer automation creates individual reports with this information for each sales representative from a single master session.

Via the Report Folders window you control which briefing books from the underlying .das file will be included in the new reports. So your recipients will be offered only their specific analyses.

You can access the element names that are affected from the update and/or Generator by the help of placeholders and insert these as varying parts in filenames (watch the tooltip info in the Address field!). This way you make sure you have unique names, the output files won’t overwrite each other, and the report recipients will be delighted about your sound naming.
In the example shown aside, only the “Chair“ name part is fixed. The name of the report folder, “Sales Reports”, the updated dimension element (“2005_Q3_7“), and the name of the current iteration element (customer name “Albert&Albert”, “Ambiente” etc.) have been set by the server. Placeholders are allowed in the path names aswell, and subfolders will be created automatically whenever necessary. 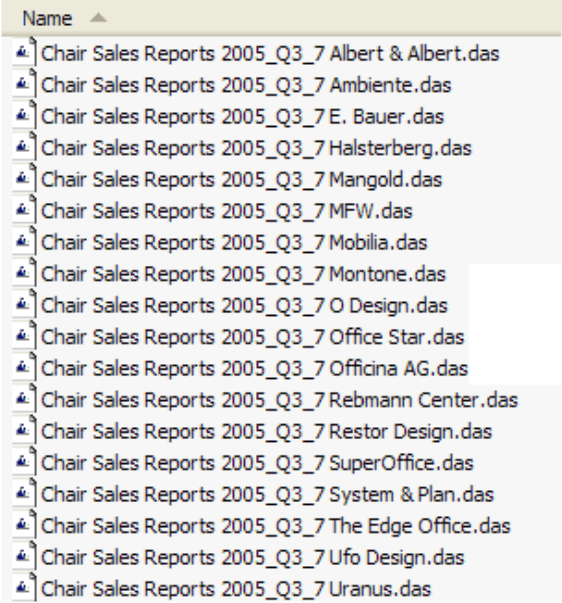