Pi, the mathematical constant representing the ratio of any circle’s circumference to its diameter, has fascinated mathematicians for centuries. In their attempts to approximately identify its exact value, they have produced a wide range of algorithms and traced the number to over a trillion decimal places (not to forget the “3” before the decimal point). “It’s absolutely useless – but an incredible feeling!” explains Professor Albrecht Beutelspacher from the Institute for Mathematics at the University of Giessen.

This type of sentimentalism, however, has no place in management reporting. Digits alone don’t lend insight even in theory. Instead, they get in the way of understanding important relationships. In this edition of clicks!, we will explain how you can tame the numbers in your reports and format them accordingly.

How easily others can read and understand your reports often depends on how you format your numbers. When we say “formatting” in this sense, we are not referring to the font type, color, style or other design aspects of the print layout. Instead, we mean how many digits and characters should we use and which ones should we choose in order to avoid pseudo-accuracy? Who profits from knowing the exact cent value of million-dollar figures… and in which decision-making situations is this precision important?

In this edition of clicks! we will explore the options DeltaMaster offers for formatting numbers as well as how you can influence them.

In general, the properties that apply for DeltaMaster are based on those of the entire computer on which it runs. In your Windows control panel, you can customize these “regional and language options”, for example: 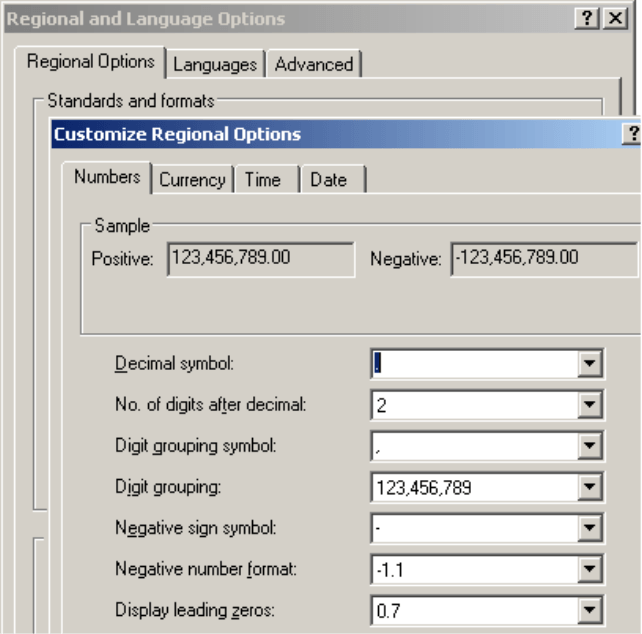 These and other properties also determine the appearance of DeltaMaster. This is a great advantage when you want to distribute reports in different countries, because the recipients can view the analyses in the form that is familiar to them – and not the report author.

Although you can make individual customizations for measures and calculated elements, DeltaMaster will generally utilize the Windows properties.

You can determine how each measure should be displayed on the Format tab under Measure properties. 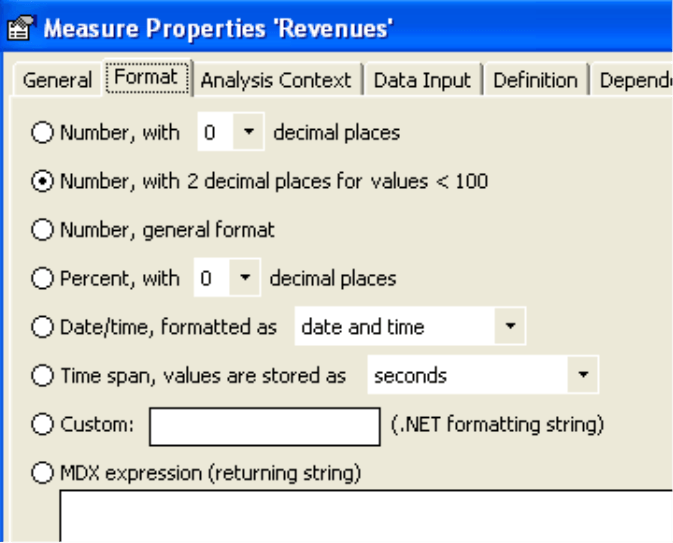 For calculated members such as a budget-actual variance, simply click on the Format link. Here you can access almost the exact same options as in the Calculated measures Editor. 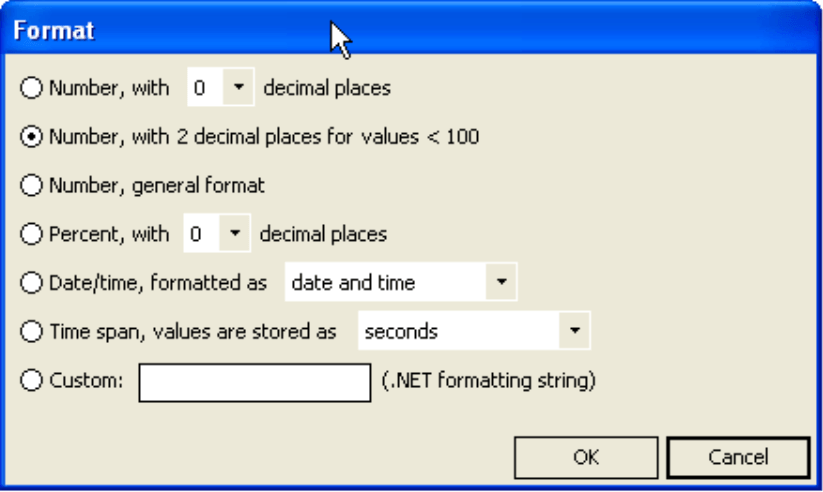 Depending on the value, a number with a General format will be expressed either as an integer or in scientific notation (1.08E+07).

You can also customize the number of decimal spaces used. As mentioned previously, your personal Windows settings will determine how DeltaMaster displays positive or negative numbers or if a period or comma is used to mark decimals or groups of thousands.

When you work with dates, you can also see the direct relationship with the control panel. The Date and time, Long/short date and Long/short time options are identical to the properties there.

Time span is suited for any type of time measures including contract periods, processing times, length of telephone conversations and delivery deadlines. You can also express a large volume of seconds, for example, in days, hours and minutes.

If you require even more customization than the examples above, you can also apply .NET format strings by simply entering them into the desired input field. When working with measures (not calculated members!), you can dynamically set the number format, for example, based on the current view. This is done using an MDX statement which returns a format string as the output as we will explain later in the document.

The format strings consist of one or (usually) more placeholders which can be replaced by numbers, digits and characters depending on the value to be displayed. If you have ever created a user-defined numerical format such as “#.##0” in Excel, you will understand the general concept.

The pool of characters and the possible combinations thereof that influence the output format is immense. Since a complete documentation would go beyond the usual scope of clicks!, we will simply concentrate on a few typical usage scenarios.

For more information, please refer to the online documentation for. Microsoft NET Framework:

Displaying values in thousands or millions

In order to summarize the small print for the common scenario that you want to display values in thousands or millions, simply use “#,#,” for thousands and “#,#,,” for millions. Both strings will suppress decimal spaces and group the numbers by thousands.

Please do not confuse the number 0 with a missing value. You can change how DeltaMaster presents these in the Extras menu under Options, Presentation.

As mentioned above, you can use MDX to calculate the format string so that it dynamically changes based on the current view.

For example: While a global enterprise thinks in terms of billions on a group level, its country-level operations think in millions, their sales regions also calculate in thousands and account managers even count their own customers’ revenues down to the last cent.

You can account for these different points of view in DeltaMaster. When formatting the measure, you simply use an MDX expression similar to this one:

You can enter this expression as is in DeltaMaster, however, the indentations and multiple rows have only been used to emphasize the structure. Please note that you should always write the name of the dimension in brackets and ensure that you enter the exact “.CurrentMember” name using upper-case and lower-case letters.
In this expression, the “iif“ operator appears three times in a nested form. It generally has this syntax

and works similarly to the “IF” function in Excel. If the condition has been met, the first value (i.e. the first string) will be returned. Otherwise, the second string will be returned – and this, in turn, can contain another “iif” expression. The conditions check whether the currently selected member in the dimension ([BusinessUnit].CurrentMember) is located on a certain level. If yes, we have found the appropriate string; if not, the next “iif” expression will run a query on the next level below. As a result, we receive different format strings depending on if our interests lie on an enterprise, country or regional-office level.

“#,#,,, bil“ is the format output for the top member with the ordinal “0”. The three commas at the end of the number create a division through a billion. In order to make this clear, the literal string “bil”, which was displayed in the report, was used. For currency specifications or physical units (e.g. kg, m2), you should use the Units field under Measure properties (General tab). In this case, the unit will only be entered once behind the name of the measure and not repeated in every cell.

As you can see in the example above, formatting is related to scaling, division and rounding up or down – and that is exactly what makes the report so refreshing. Preparing reports for display is always the final step in the editing process for DeltaMaster. It has no influence on the calculation logic. DeltaMaster calculates all reports and analyses with the original precision of the data, regardless of how it is later displayed on the screen.