Some headlines even make headlines. Back in April 2005, for example, a major German tabloid graced its front page story with the title: “We are the Pope!” Certainly, there is a lot askew in a headline. It gained so much attention, however, that it became a popular saying and was reused throughout the media in multiple variations. Would this headline have been as popular if it had just read: “Results of the papal conclave”?
Even though we don’t usually look for inspiration in the tabloids, this example shows how important strong titles are – even in management information or reports. And thanks to the Action titles in DeltaMaster, adding headlines to your reports is easy. This way, you can present the main message of your report in a prominent place and say what you want to say. What’s more, you can combine all Action titles so that your readers understand the gist of your story before you even tell it. We recommend that you use the same care to choose the headline of your report as you use for the content itself. You’ll see that these kinds of reports are highly effective – without needing any further frills besides.

One of the advantages of using DeltaMaster is that you can design and present your reports in a single step. As we described in DeltaMaster clicks! 09/2009, you can interactively present the data you have prepared right in DeltaMaster – all within the application and without any media breaks. The message that you wish to convey is particularly important for any good presentation. This message shouldn’t just take center stage in your thoughts or in the overall concept. Ideally, you should clearly spell it out in words for everyone to see, for example, above every visualization that you project against the wall or document in supplementary handouts. The headlines that we choose have a major influence on how – and if – the content is understood.

DeltaMaster accounts for these factors through a concept called Action titles. Although we are uncertain of its origin, this term is commonly used in context with presentations.

An Action title is displayed as a headline in reports. Optimally, it should summarize the main message of the report in a full sentence. An Action title could look like this in the presentation mode of DeltaMaster: 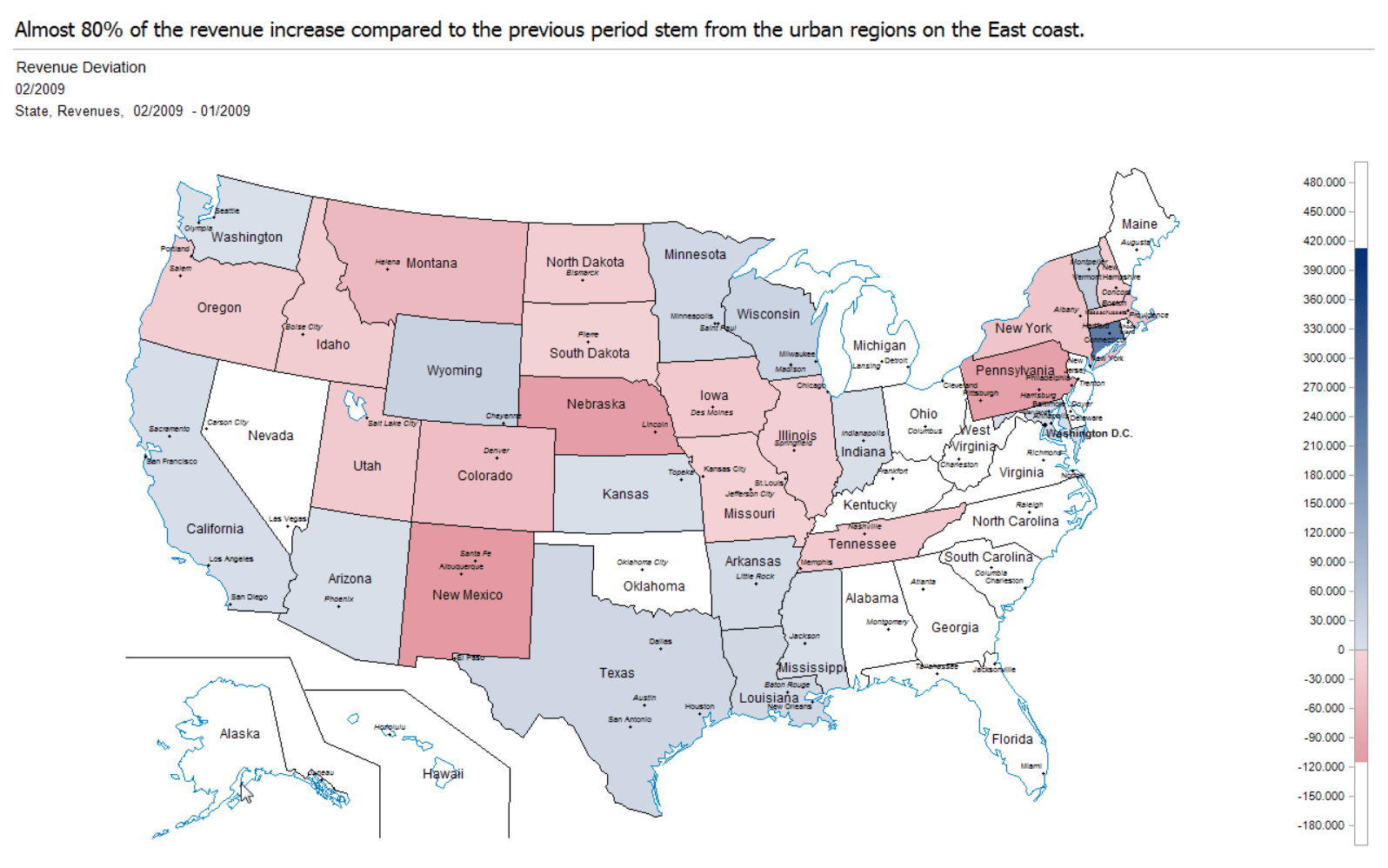 An Action title is different than the Report title, which is “Revenue Deviation” in the screenshot above. The purpose of the Report title is to differentiate reports and describe what they show, in other words, which content or which views they contain. An Action title, in contrast, demands the reader’s attention. It wants to warn, shock, recommend, emphasize, explain or simply say something.

The report title is displayed below the Action title in presentation mode and above the report in the normal view. In the default setting of a briefing book, reports will be shown with their corresponding report title.

Another difference: Only report titles support MDX expressions such as “<view1>” or “{[Periods].CurrentMember}“: to reference and automatically render the name of the view saved in your report. This is helpful because you can immediately see what the report in the Briefing book shows and if the view is later modified, the name automatically changes as well. Action titles, however, do not support MDX expressions. Its sole purpose is to add value to the actual report through additional content. It absolutely requires a living, breathing editor who carefully phrases the headline. For this reason, we deliberately chose not to support MDX expressions in Action titles.

You can add an Action title in every user mode in which you can create new reports, in other words, Pivotizer, Analyzer and Miner. DeltaMaster will display this headline in all user levels (i.e. including Reader and Viewer), in a Web browser (provided you have published the reports using the DeltaMaster Web Option), as well as in HTML files and e-mails generated with DeltaMaster or Report Server.

Working with Action titles is very similar to writing comments that appear under your reports. To write a headline, simply click on Write action title in the status bar at the bottom corner of the Report, Cockpit or Analysis window. This will open a data entry field for your message in the upper part of the window where your headline will appear. If a headline already exists for your report, the option at the bottom of the screen will be called Read action title. If you select this link, you can open and edit the existing one.

Similar to comments, you can access the Toolbar to select the font type, size, style, and color. In contrast to comments, however, Action titles are typically displayed in large font types. We recommend that you avoid using bold type. If the standard font size seems too subtle, try using a larger size instead.

By moving the thin line between the data entry window and your report, you can provide extra workspace. For your presentation later, however, its height is irrelevant: DeltaMaster will automatically assign a proper amout of space for your headline.

All Action titles are linked to saved reports. As a result, you must save your cockpits and analysis results as a report before you can edit the headline. Since these texts are stored under Alias sets, you can administer your Action titles in multiple languages just as you already can for comments (Model menu, Model browser, Alias sets; see DeltaMaster clicks! 4/2007 for more information).

Part of the Action title concept is that you can present them all at once to create a complete summary. Since the most important messages have been described clearly, report consumers in a rush can still understand the main points without having to study each individual view in detail. For this purpose, you can display all Action titles on the title pages of folders and also in place of the report title in the Briefing book since the DeltaMaster 5.4.1 release.

DeltaMaster displays the title pages of folders in presentation mode (View menu, Screen presentation; F5 key) as well in Reader and Viewer modes if a folder (and not a report) is selected in the Briefing book.

You can determine if DeltaMaster should display Action titles under Folder properties (context menu of the folder in the Briefing book) on the Title page tab. In this case, DeltaMaster will arrange the headlines in rows on the title page so that report consumers can read them all at once. And since each Action title contains a hyperlink, readers can simply click on the headline to switch to the corresponding report and see its detailed contents. 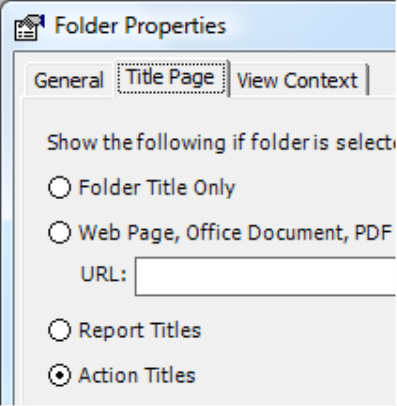 In DeltaMaster clicks! 9/2009, we also recommended using this function to generate an interactive agenda slide for presentations. Now you know a second way to use this feature. This option allows you to present an entire discussion in context so that the reader can understand it without having to listen to the oral presentation.

Although you can add title pages in Pivotizer, Analyzer and Miner levels, DeltaMaster will not display them. If you are working in one of these levels and want to review the entire ‘story’, you can use your Briefing book where you can switch between report titles (standard) and Action titles as of version 5.4.1. To change this setting, simply select the respective option in the I want to… menu of the briefing book for all user levels from Reader to Miner.

If you choose to view Action titles, these also serve as links so you can open your desired report directly from the Briefing book.

If you export a report to Microsoft Word, Excel, PowerPoint, or to an HTML file, DeltaMaster will include all Action titles. Please note, however, the following system-related differences:

We admit that writing good Action titles is not easy – and it’s not always necessary either. Some statistics, overviews and arrangements are valuable without a special message. In these cases, you could use the Action title to describe the report content. After all, an action title has a more noticeable format than the more factual report title. Presentations and meetings often deal with messages – and they belong in the headline: the Action title.