We have often spoken on behalf of using paper as a medium for management information because it has such a wonderfully high resolution. Screens and projectors simply cannot compete – but they, unlike paper, are suitable for interactive applications, which can immediately show what we want to see whenever and wherever we need it. Tooltips are just one example of interactive features. If you mouse over regions of a map – or sparklines, trend arrows, and scales in graphic tables or even circles, bars, or columns in charts, DeltaMaster will display the respective values, descriptions, and other important information in a small box next to the mouse pointer. This way, you can directly access additional information from individual report objects without permanently showing them (and having them take up space from the start). This makes it easy to not only analyze and understand but also to present and discuss your data. Since interactivity is one of DeltaMaster’s strengths, you can access tooltips – partially with explanations, advice on the proper interpretation, and the results of additional calculations – in many different areas of the application. You’ll find more tips on tooltips in this edition of clicks!.

Every computer user knows tooltips – the small, typically yellow windows that appear next to your mouse pointer when you hover over something on your computer screen. Micro­soft calls them QuickInfos, others call them info windows, balloon help, or balloon tips – and some users simply call them bubbles or flags. The nice thing about tooltips is that they don’t take up any space on your computer screen because they are only displayed when needed. They don’t need to be squished among the other elements because they are placed on top of them, and they disappear by themselves when you move the mouse pointer away from the object. Tooltips are a good example of the possibilities that interactive user interfaces offer, and DeltaMaster makes extensive use of them throughout the software.

You can divide DeltaMaster tooltips in three different categories based on the subject of the additional information.

In this edition of clicks!, we will explore the first two categories. We will show which information you can obtain from tooltips to explain the application data and to make it easier to build analytical applications with DeltaMaster. Our goal in doing so isn’t to make a complete list but rather to make you aware of the possibilities and rouse your curiosity. So go ahead and explore your cockpits, analyses, and reports with your mouse! That will get you ready for future DeltaMaster versions, which will certainly contain even more tooltips.

You can add a Description to the Measure Properties on the General tab. DeltaMaster will then display this Description in all cockpits, analyses, and reports when a user mouses over the measure’s name. This feature is often used to document a measure, for example, to explain a calculation or the origin of the data.

If you want to create a more detailed description, please use the Annotation field in the Measure Properties instead. Annotations will not be displayed as tooltips.

Tooltips in the pivot table

Pivot tables are probably the most important report format in DeltaMaster and contain many tooltips: 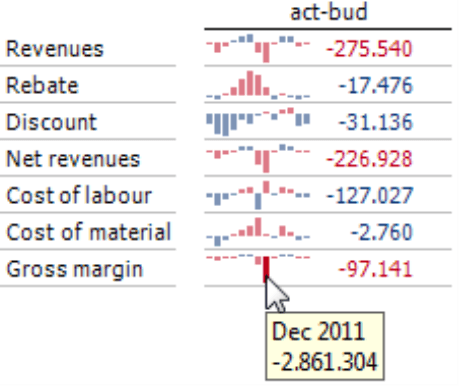 If DeltaMaster does not show all subordinate members because there are more members than the limit defined in the Table Properties on the Sparklines tab, it will display an ellipsis at the end of the sparkline. This tooltip will then explain how many members have been omitted.

Tooltips in pivot charts and graphical views of analytical methods

All of the graphic elements in DeltaMaster charts are interactive. If you mouse over them, you will see the object’s value and description as a tooltip. Some of the methods have special features: 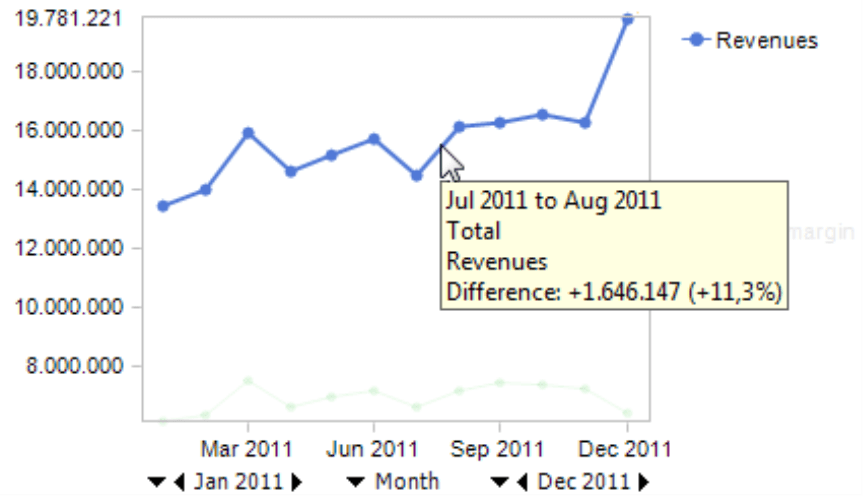 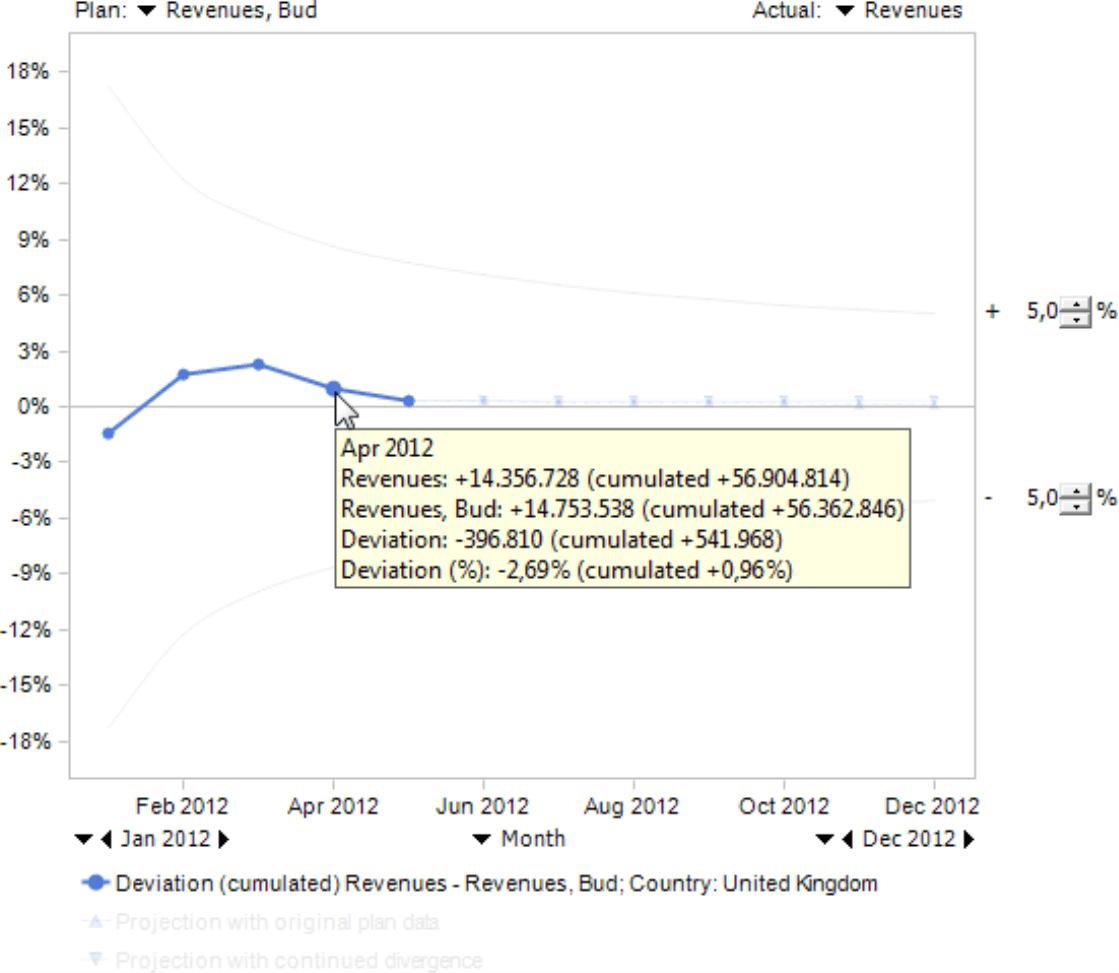 If you use info windows, which are an advanced form of tooltips, you can even format the output, integrate images, etc. in HTML. 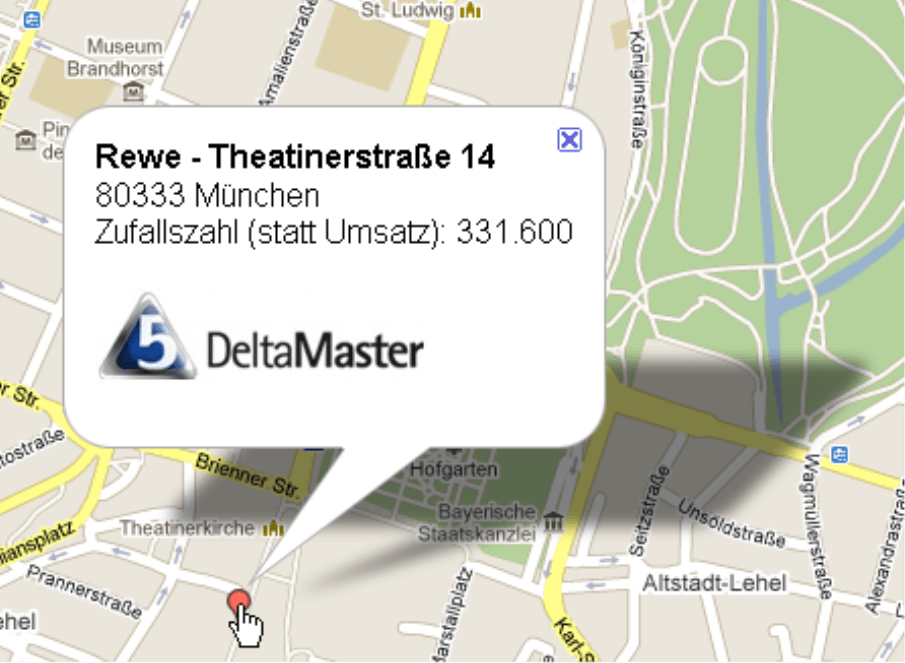 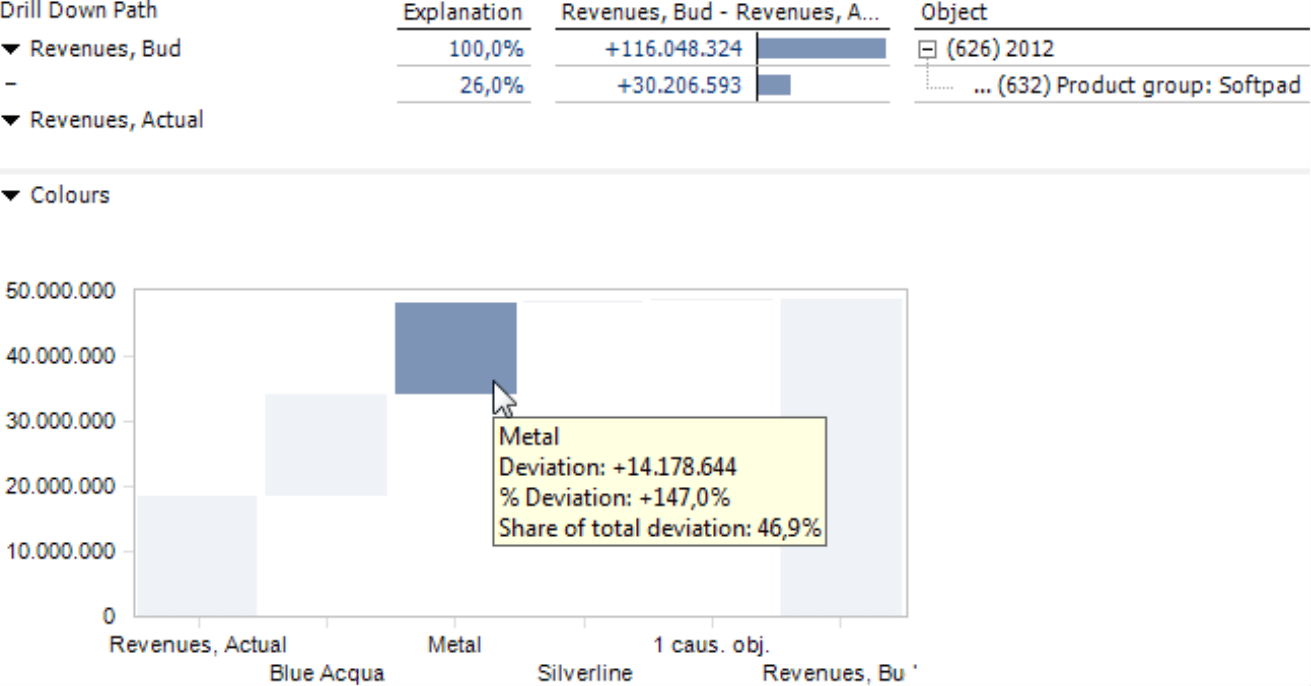 In Combination Cockpits and Flexreports, you can create links to other cockpits, analysis templates, reports, external documents, websites, or PDF files. DeltaMaster displays the link target in a tooltip. If you are working with Flexreports that reference pivot tables, you can also place one of the links that were defined in the pivot table directly in the Flexreport cell to create a hyperlink (see Delta­Master deltas! 5.5.1, feature #20). The Target or the Description of this pivot link is also displayed in the tooltip.

You can access all of the tooltips described on the previous pages in DeltaMaster’s Presentation Mode (View menu or F5 key). The tooltips offered in this mode are particularly interesting. You can first view the prepared reports in the presentation and then interactively focus on individual objects from the reports in the following discussion. The tooltips provide more in-depth information. 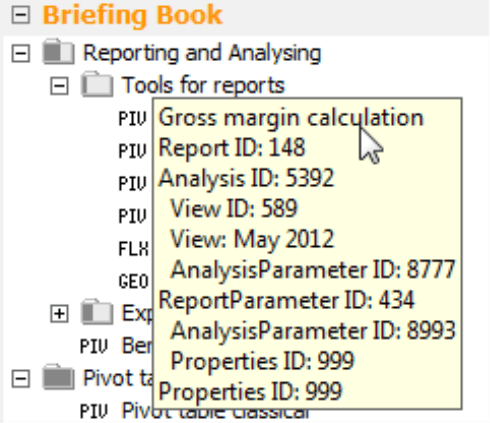 These IDs are useful if you do a Direct Selection in the search field on the right side of the main menu bar of DeltaMaster. If you enter “#r145”, for example, DeltaMaster will open the report with the ID 145. The syntax for the Direct Selection, in turn, is displayed as a help text in a tooltip (without the Alt key because this way of calling up information isn’t just beneficial for report editors).

DeltaMaster offers additional information in the form of tooltips in many other areas of the application. Unless stated otherwise, you can access the following tooltips without needing to press a key as well.

There are no tooltips in tablets such as the iPad and other touch devices because they do not have a pointer that “floats” over the interface and can be used to “touch” objects.

In the DeltaMaster TickerPortal, an app for iPad and iPhone devices, you can still open a detailed view for the columns of sparklines. If you tap with your finger on the desired column and hold it there, a small window will appear that displays the value and the period of the column. If you leave your finger on the screen and swipe it to the left or right, the detailed display will change as well so that you can view information on all of the columns.

Displaying rates with values around 100 percent