Vodafone compared its subsidiaries. How quickly they have grown. In the regions around the world. There is only one subsidiary in the US. It was still compared though. But what with? Looks rather amusing. Single column. 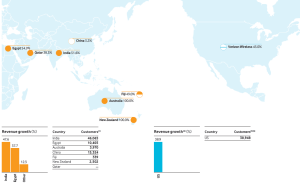 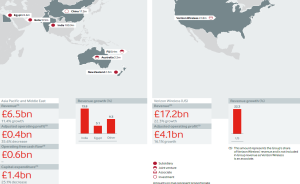 I see: The graphic designer was stumped. Everything had to look uniform. What could he do? Use a global scale. Then everything is all right again. And one column is by itself but no longer lonely.

No more lonely columns in the 2010/2011 Annual Report, but amusing suggestions. Write whether it was “growth” or “decrease” afterwards. Then you’re not negative anywhere.