More is more in time series. The longer, the more we can see. And learn. For example: The States has never bought as many houses as in 2005. And since 1964 not as few as today.

Less is less in time series. The shorter, the less we can see. And learn. For example: If shares are better than houses.

Many is more in time series. The Dax series above and the one below were published in the same FAZ newspaper. I learn: At the stock exchange one often arrives at the same place. 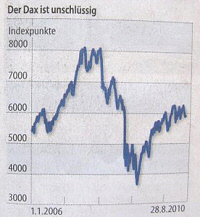 Many, different, long is the most in time series. Aha: People smoke less, but don’t pay less.

Time: the longer the better, the more the better.