In many charts you see changing backgrounds, colors, contrasts. They should separate what is side-by-side. But they connect what is separated. The eye looks out for meaning. 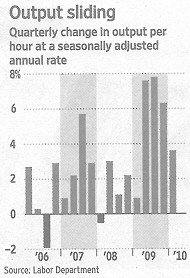 The WAMS doesn´t point out anything. Background bars as stripes are CI. Because: Everything gets striped. Sometimes that replaces a scale. In the picture on the right every stripe is five wide. Bars and stripes build checks. That is not stylish. In other pictures every stripe is CI. They unite what does not belong together.

Diagrams and CI don´t get along well.