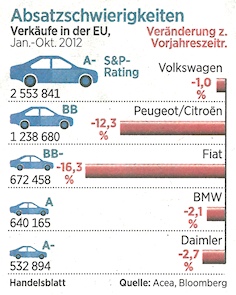 Why is it so hard to understand the graphic? Because it is not ordered by rating. Because rating is blue and so are the cars. Because the car size doesn’t mean rating, but sales. Because the eye asks: the bigger the blue car, the what are the red bars?

Now it works. Why? Because: correlation only shows with order.