Ivy League Rock and Roll - A day with Edward Tufte

Edward Tufte, the world’s most renowned visualization expert, holds legendary information design seminars up to 40 times a year. I recently was among the hundreds that flock to each of his live performances. What an experience!

Crystal Forum, Washington D. C., 9:20 AM: Four friendly young men and women are bustling behind the table of the registration area, crossing names off the attendee lists and distributing heavy boxes with handles. Each package contains the complete works of Edward Tufte: The Visual Display of Quantitative Information (1983), Envisioning Information (1990), Visual Explanations (1997) und Beautiful Evidence (2006). The piles are stacked high. 500 attendees are expected at today’s session. 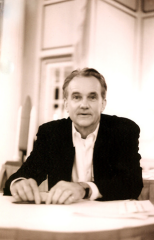 Those who have already registered, grab a cup of coffee and begin their search for an empty seat in the brightly lit auditorium. A long line, which leads to a small table at the front of the room, has formed in the left aisle. Edward Tufte has “office hours“ and is busy signing books. Politely, he asks the names of his guests as well as the reason why they are attending. He then offers helpful advise on which chapters of his books would be most useful to them.

The other participants already have their assignments. Inside the package of books lies a piece of paper citing passages for suggested reading prior to the start of the seminar. Some participants may not know now that this “lesson” is one of many that will penetrate their minds by the end of the evening. Although he served as a consultant for IBM, Lotus and HP and was an advocate for good screen presentations, Tufte is still convinced that a single sheet of paper leaves a bigger and longer lasting impression. People simply ponder more with paper.

In the meantime the auditorium has filled and the suspense and anticipation begins to grow. Tufte’s seminars are legendary. Anyone who deals with data and visualization on a professional level knows his books – and those who don’t are probably in the wrong business. Today in Washington’s Crystal Forum many participants come from government agencies and military institutions. There are also several students whose majors range from information technology and graphic design to economics, biology and medicine. Some, balancing notebooks on their laps, will take detailed notes so that they can fully absorb Tufte’s messages later at home.

Tufte’s seminars have almost become a rite of passage for the modern intelligentsia. Tufte, who is affectionately known as the da Vinci of data, plays in such an elite league of his own that no one really cares who’s on second. Successful stock market speculators, visionaries, creative stars of advertising agencies, the Dilberts of the business world, the heads of Fortune 500 companies, and even Bill Gates all know Tufte and showcase his works on their bookshelves. In fact, the typical “kindly contributor” that visits his online forum has a doctorate degree in biology.

Even those who don’t know him feel the effects of his work. His design principles are present in every well-planned Web site, sophisticated magazine and major US newspaper as well as in brochures, train schedules and even hospital invoices.

Tufte developed his exceptional standing in the field of information design at Princeton and Yale, where he taught statistics and political science for over thirty years. He devoted over seven years of his life to each of his four standard works. No one else can understand and present the meaning behind data better than he – and that at a time where disinformation and misinformation are booming and information technology delivers more numbers but with less meaning.

In addition to collecting remarkable amounts of information on information design, Tufte also developed an exceptional talent for communicating his findings during his days as an ivy league professor. Later in the day after his seven hour performance, Tufte will stand in the empty auditorium with an ice-cold Corona in his hand. Like a rock star, he refers to his appearances as “gigs”. His roadies, who ensure that his beer has just the right temperature, are also on tour. The show that they put together on three consecutive days in Washington D.C. has no resemblance to a typical college lecture.

What is most remarkable, however, is that Tufte’s show does not use or need special effects. The real show is Tufte’s content, which he presents in his clear, precise and no-frills manner. In the seven-hour seminar he only dims the light and turns on a projector for two short films. His visual effects are displayed with the highest possible resolution – namely on paper. In most cases he asks the audience to open one of his books to a certain page and then discusses one of his select illustrations gathered from over the centuries and around the world.

From time to time he gently takes an awe-striking original from Galileo Galilei or a centuries-old copy of Euclid’s scripts and proceeds to carry it down the aisle. Later, one of his assistants will also walk through the auditorium with one of these precious books in hand. The assistants wear immaculate white gloves, as they have in every seminar over the past few years. They signalize that everyone’s yearning desire to hold the book in one’s own hands (just once!) is futile.

In fact, the white gloves are just one of many subtle elements in the seminar. Tufte intentionally calls his book signings “office hours” to show that he is still grounded despite the cult status that he has achieved. Although Tufte appears very close and real to his audience, his assistants deliver the right amount of distance through their presence. That includes the fact that the tour brings their own sound technicians to ensure the proper acoustics instead of relying on those from the hotel.

Tufte has never regretted the fact that he left the campus scene early and is now on tour many days out of the year. Later at dinner it becomes clear why. Similar to Richard Feynmann, Tufte is driven in his mission by a free spirit that needs space to evolve. When he wanted to publish his debut book, the usual procedure was not an option for him. Publishers were appalled at the fact that he as the author wanted to make the decisions regarding the book’s design. So, Tufte took out a mortgage on his home, purchased a large garage and has since published all of his books himself. “My view on self-publishing was to go all out, to make the best and most elegant and wonderful book possible – without compromise. Otherwise, why do it?” he explains.

Tufte’s principles are primarily based on historical examples. When he talks about Galileo Galilei, Leonardo da Vinci and Sir Issac Newton, it is clear that he is driven by very fundamental principles that have withstood and will continue to withstand the test of time. They have little to do with computer technology, graphic design programs and other modern “advancements” that often inhibit persuasive presentation through poor resolution, flashy décor and sloppy design.

In fact, Tufte illustrates all of his principles with a single chart made long before software was invented. The multidimensional presentation is Napoleon’s March to Moscow, a drawing made by Charles Joseph Minard in 1869.

The best chart the world has ever seen: Tufte classifies Napoleon’s March to Moscow, a drawing made by Charles Joseph Minard in 1869, as one of the most effective graphic illustrations ever created.“Minard’s presentation tells a rich, flowing story,” describes Tufte. The chart, which depicts the losses of Napoleon’s army during its 1812 invasion of Russia, begins on the left-hand side with 442,000 men en route to Moscow. The black line, which moves in the reverse direction, signifies its retreat and the horrific losses.

Tufte describes his own life achievements as an attempt of “Escaping Flatland”. The world that we are trying to understand is not two-dimensional. It is multivariate, complicated and exciting in a carefree sort of way. Each person’s interpretation of the world, however, is restricted to the two-dimensional structures of paper and computer screens. The average 3D chart, however, seems clumsy in its results. Tufte prefers his exemplar of Euclid’s geometry dating back to 1570. The piece, which once belonged to the playwright and Shakespeare’s contemporary Ben Jonson, visualizes solid geometry with the help of a fold-up model. The three sides of a triangle can be extended from the book and formed into a three-dimensional pyramid. Tufte, who has used this same pyramid in his book “Envisioning Information”, applies this technique again and again in “Visual Explanations” to bring new insight to his readers.

The only other way to escape flatland is to think long and hard about visual presentations. Tufte has just exemplified that in the past seven hours. He takes the audience of the Crystal Forum along on a tour de force based on his knowledge of analytic design gained over his long career.

Tufte, too, meticulously follows his own rules of good visualization. Each participant took home something completely different on this day. I, personally, was very moved by a fascinating man.

The eight commandments of good visualization