The KPIs that managers need to drive their business are nothing more than numbers. Speed is measured in numbers, too. That’s why professional pilots only use digital (and not analog) speedometers.

According to Webster, an analogy is a resemblance, a similarity or a comparison thereof. We can always learn something new from analogies. Recently, for example, I questioned if efficiency through automation applies for industrial production, why can’t it hold true for reporting?

Drivers, pilots, astronauts, train engineers and managers all rely on instrumentation to explain the current operations of the car, jet, space shuttle, train or company through the displayed values. Due to these similarities, we are inclined to transfer these experiences into other areas. We must do so, however, with caution. The conditions are rarely so similar that we can do a one-to-one translation. 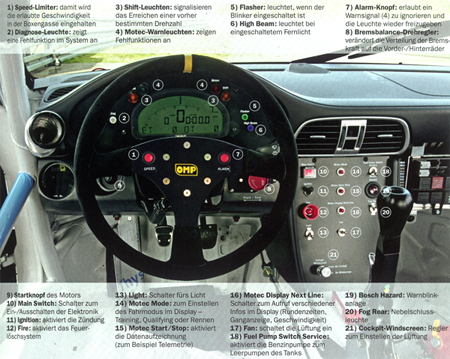 The cockpit of a Cup Porsche. Please click to enlarge.

Speaking of cars, the only truly worthy paradigm is racing. The teams work under extreme deadlines and regularly need to make costly, high-risk investments. The slightest mistake can have tragic consequences and there is no room allotted for correction. From an economic standpoint, we might say that only in such an extreme environment an ideal system could mature. That applies for help systems, too, like the instrumentation in a race car.

Now … what stands out the most in the picture above?

Speed is displayed digitally. No scale. No indicator. Why? A pilot has less than a tenth of a second to benchmark the speed when breaking as well as entering or leaving the curve. And every single km/h counts. Any type of graphical encryption would make the number more difficult to read.

Speedometers in normal cars are analog because it’s still the trend and the law limits the speed in which we enter a curve on busy city streets or highways. Trends are also to blame why many management reports still contain analog gauges. Unfortunately, in this case the software vendors misunderstood the analogy. After all, what manager would want to encrypt his or her company’s KPIs which, in effect, are nothing more than numbers?

In a competitive world, digital gauges are the only way to go. Who knows? They may come in fashion one day. If they do, however, it will probably be for the wrong reasons.