A chart from the German newspaper ‘Welt am Sonntag’ distorted the facts by more than seven times. In Part 1, we reviewed Bella’s law of proportionality, measured it with the lie factor and tried to save the world through standardization. Today, we will tame the tiger for good.

Jon Peltier has followed our efforts and recommends using a logarithmic axis. Rightly so! In a logarithmic scale, the chart conveys the same message as the numbers. The original (i.e. in the upper right-hand corner) showed a steeper increase for electricity than gas. Heating oil virtually exploded. In the chart below, the proportions are back in order. The slopes of the lines reflect the value changes of 122, 83 and 36 percent: 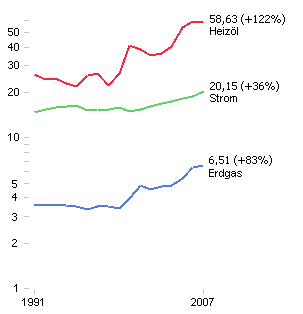 Therefore, a logarithmic scale shows relationships in the proper proportions. But why?

The tiger’s secret: identical decimal places
Logorithms have many advantages. We can see one of them in the following table which shows logarithmic values from 10 to 100 and from 100 to 1000.

Newspapers use logarithmic scales even less frequently than standardized presentations. As we can see, they require an explanation. That and a few other reasons, which are irrelevant for our case in point, have led some to compare their usage with riding a rabid tiger while blindfolded and under sedation. That is absolute nonsense.

“In order to represent comparable percentage changes, the scale is logarithmic.“

A logarithmic scale ensures that the slopes show the actual changes in percent. We can only read or label the absolute values from a scale. A comparison that shows slopes that are not proportional to the percentage changes is misleading and, therefore, useless. A small explanation on the usage of a logarithmic scale is an adequate reading aid.The honorable New York Times shows how that works. Their presentation on the financial crisis integrates charts, numbers and text in an excellent example of information design.

One can really interpret the parallel history of falling stock prices that way – without thinking that it is the result of poor scaling. The Times does a superb job of combining data, text and images into a meaningful, highly informative, pooled message. If you take a closer look, you even understand the logarithm quickly. It’s actually quite surprising that you don’t encounter them more often.

Whether you are an avid reader of the New York Times, a controller or manager, you know from now on that the rabid tiger is really nothing more than a harmless kitten.