Effective reports first grab your attention and then guide you to under­standing, step by step. That’s a complex task because something called “change blindness” stands in the way. That means if you delve too deeply into one thing, you oversee something else. Here’s more on the downsides of attention.

This Monday, I pondered with a colleague from our R&D department about how we could make the design of one of our built-in analytic methods more attractive. This method automatically derives the underlying causes of budget-actual variances – and experienced users love it. Now we want to make this highly useful method even more self-explanatory so that casual users can simply glance at the results and understand why the path that the system suggests is plausible. I went through a few designs with my colleague. Once more, we sensed a familiar dilemma. You need something bold to grab someone’s attention. Understanding, how­ever, is all about subtle nuances. What we thought was the best design at a first glance was upon closer investigation too superficial as far as the content was concerned. So we kept looking… 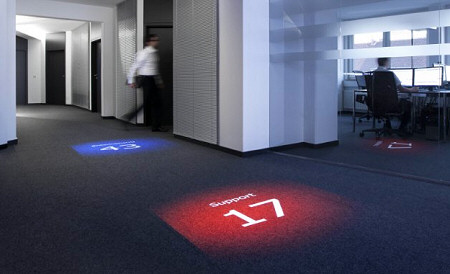 A KPI floor projection in our office in Nuremberg, Germany. Drama and detail have equal weight. Overseeing it is almost impossible, and you understand the message with just a glance.

Throwing information in front of your feet

On a side note, we were successful in our own plans to make a subtle, yet bold statement within our company. A few weeks ago, we decided to literally spotlight some KPIs that are very important to us and our company’s success – directly in front of selected offices throughout our company. Between releases, our developers always have to implement a certain number of corrections, additions, new features, and other so-called change requests (CRs) in our software. Everyone in our company knows how far we are away from the next release. The sheer number of finished CRs provides a strong indication. The same applies to the number of open support cases. We project both of these KPIs in the hallway between the two departments. The effect is dramatic, binding, and transparent – which is motivating and rewarding in the process. The controls are so inherent that you can almost feel them (down to your toes, of course).

Why is it so challenging to create subtle, yet bold statements, combine drama and detail, and simply direct people’s attention? Based on what we know today, humans just simply are not particularly good at recognizing change*. People look at something, look again, and still oversee a change – even a big one. And that isn’t just when your better half has returned from the hairdresser. It applies in general. What is even worse is inattentional blindness, which is when you don’t see your spouse at all – even if you are not concentrating on something else! Overall, cognitive blindness is so widespread that people only realize things that they observe when they are paying close attention. This is also a topic at our upcoming forum on March 19th in Frankfurt (in German). Here we will illustrate what cognitive blindness means based on an amusing experiment.

This finding becomes more and more important with the growing number of steps required in the thought process to understand something. You probably know that all too well from your own experiences. As the sequence grows longer, the more difficult it becomes to stay concentrated and diversions become more enticing. That should speak in favor of a few large steps. As the jumps in thoughts grow larger, however, the changes become greater and you miss the correlation. The change between the steps is then so large that you don’t recognize it as a change from the previous state and simply overlook it. 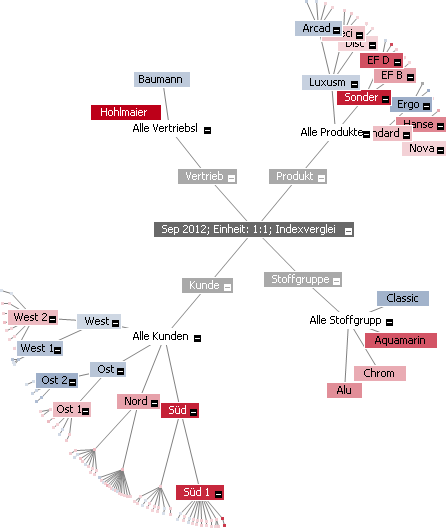 Hyperbrowser in DeltaMaster: The transition from one “branch” of the tree to another is very smooth. This is a good remedy for treating change blindness.

Zooming: Visualizing change as a continuum

All this affects reports, dashboards, report sequences as well as interactive tools. Reports benefit from a reading order that perfectly corresponds with the necessary steps in the thinking process. Dashboards suffer when two things that have no inherent relationship are placed next to each other. Interactive tools need a good ratio between user interaction and change. If it is too small, the readers will quickly grow tired. If it is too large, however, they become blinded. The Hyperbrowser, semantic zoom, and pivot navigation in our software are designed so that the user experiences each triggered change in a flowing manner. Although the before and after states are not continuous, the human brain connects the two as a sequence. This makes the change visible. You can compare this to painting a wall; the hand movement and the evident change in color are one and the same.

In the meantime, my colleague from R&D sent me new designs – by email. Shortly thereafter, he still stopped by to present them to me personally. Apparently, he was concerned about inattentional blindness towards his email – or afraid of change blindness if he let me examine the designs on my own. Attention, however, has its downsides, and one of them is that we cannot just show meaning as simply as we would like. Working memory is sequential. In-depth understanding evolves in a sequential way as well. In other words, it comes down to the reading sequences, which a static report can foster but not force.

Overall, the phenomenon of change blindness shows that once we have achieved progress in notation, we have to switch our focus back to interaction. The report design, which keeps getting cleverer, is also standardized. Static reports, therefore, have gotten better as well across companies, but we will talk more about that at our forum. Longer, intelligent thought sequences need interaction. Software can automatically develop a reading order for people to study their data on their own. Controllers can use these same instruments in presentations to guide their audience step by step to an in-depth understanding of the subject matter.