Is the end of dashboards near? Because visualizations with unrelated content are too complex for our “narrow” human minds? Because we literally cannot see through things because the eye sequences get too confusing? Here’s what neuroscientific research has to say.

Professor Gerhard Roth, Germany’s most prominent natural scientist and neuroscientist according to the magazine Cicero, wrote a book about how difficult it is to influence one’s own behavior and that of others. I’ve read several of his books and have even had the opportunity to talk to him. My conclusion: Thinking is expensive! Conscious perception is in notoriously short supply – but we need a lot of it in order to understand standard business reports. 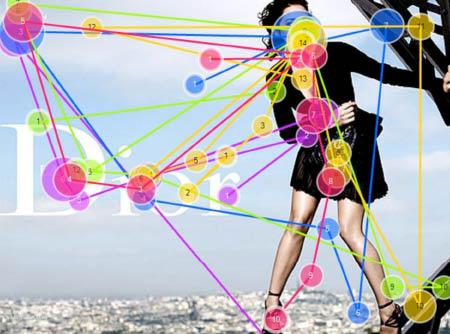 Controllers need to think like advertisers: Will the readers absorb all core components of the visualization in the correct order? And will they do it so quickly that they will see the most important things the first time around in case there isn’t a second? Source: Geise, Stephanie: Eye tracking in Communication and Media Studies – Theory, Method and Critical Reflection. In: Studies in Communication|Media o. Jg. (2011) 2, p. 149–263.

Limited attentiveness
The brain’s working memory is so limited that it can only hold four “items” at once. As soon as we add a fifth thought, we start to forget the first one. Training can increase the scope and complexity of each thought – but not the overall number of them. This type of work is extremely strenuous on our brains. The human brain needs more sugar and oxygen than the heart and ten times more energy than organs of a similar size. People can maintain a level of full concentration for approximately 3–5 minutes. Then they need a break of 15–30 seconds in order to restore that level of productivity. It is no wonder, then, that the human brain acts like a stingy merchant. It looks to simplify and reduce the workload wherever possible.

Management reports are expensive
Let’s do the math: How complex is financial controlling, measured in steps of thought? Let’s consider the monthly reports required for typical management and supervisory functions – for example, managing directors, executives, and supervisory boards. These reports usually center around a gross income statement that includes information on revenues, costs, margin, and EBIT. The readers will want to view the respective numbers in three perspectives: actual, previous year, and budget. We could simplify this by showing relative variances which, in turn, would be interesting to know both cumulated and for the current month. We examine each value individually and as a comparison: Is the current variance consistent with the cumulated variance, or is it larger or smaller? At least 24 steps of thought are required to do the work.

Sparklines: a cheap pleasure
These readers, however, won’t be satisfied to read the aggregated results. Instead, they will want to see numbers for the most important business segments in the same report. If you are a regular reader of this blog, it won’t surprise you that we would also include sparklines showing the past 12 periods for each current monthly value. In order to observe the time patterns alone as well as in comparison to other measures, we estimate that appraising them would involve an additional 4 to 8 steps of thought. You see: Sparklines are comparably cost-efficient, with one glance you can find out a pattern that was formed with 13 values.

Do-it-yourself eye tracking: With a bit of self-observation, we can see if eye movements are convenient or not.

160
Wow. That boils down to 160 steps of thought just to understand the most important monthly figures. We could also assume that these readers would regularly control other specific areas, for example, important sales regions, business segments, or product divisions. Quarterly views also play a role for many companies. (What information will we soon be communicating to shareholders and analysts?) In addition, some people may want to observe variations of the gross income statement, for example, the development of EBIT as a percentage of revenues, or simply view a year-end forecast based on the previous developments.

Rather stay one-sided on one page
Double wow: All in all, that adds up to about 600 steps of thought. Since neuroscientific research shows that we cannot keep more than four simultaneous thoughts in our working memory, that is a very daunting task that appears to be almost impossible to solve. Many of the steps that we have counted, however, repeat themselves. They are all based on a comparison: a current measure is benchmarked against another one. And each page deals with the same topic. When we turn the page, therefore, we take along insights that we can use while examining the next one. Thus the initial report could show that revenues have increased – but costs have as well, disproportionately. This phenomenon is weighted differently in the segments, but is driven by the largest segment and works its way all the way to the top. On the next page of the report, we can see if that has already affected the quarterly results and if we should speak with Investor Relations. A page later, we can view the forecast for the year-end results.

Data density versus eye tracking
There are countless ways to represent the necessary number of steps of thought for reports. We could try to fit the numbers for as many reports as possible onto a single page. After all, it would be a relief that the readers wouldn’t have to page back and forth, and we know the value of dense data. Nevertheless, the advantages of data density reverse when the eye movements needed to examine the numbers get too complicated and become difficult to learn. As data grows in density, we can absorb more information with each glance. This trend, however, begins to fall when the eye starts to jump around instead of processing the available information linearly (e.g. column by column).

Same direction
Eye tracking literally gets tangled up when the reading direction changes on the same page, for example, when a dashboard divides the months into columns and quarters into rows. The same thing happens when a report shows parts of a gross margin calculation in columns and parts of it in rows. Even changing the topic multiple times on the same pages causes problems: What is more important? The EBIT in percent or in absolute numbers? Its change to the previous month or the previous quarter? The costs in relation to revenues? For the group or individual countries? And how about the percentage point change in the EBIT as a percentage of revenues? When following these types of thoughts, anyone could lose the big picture. What’s even worse: The large number of steps of thought would lose their priority and order.

And what can we learn from all this? Management reports need to be divided into topics. One topic per page would suffice, but this page needs to cover this topic exhaustively. The eye tracking should mirror the way we think, as short and as linear as possible. When our eyes track other people, we view them vertically, from top to bottom. The horizontal eye movements are minimal. If we view the most important content of a report page in the same manner, we are on the right track with our design.