People want to present themselves. They want to show who they are, what they think, and what they can do. That can have a big impact on Business Intelligence. Here are some thoughts after a walk through the bungalow complex of Munich’s Olympic village.

Are these showcases of people’s souls? My son and I were standing, staring at the bungalows of the Olympic village in Munich. We had just visited the nearby BMW Welt, where I was looking for inspiration for the approaching installation of more monitor space on our new office floor. While we were visiting the BMW exhibition halls, Bella had waited in the car. Now we were all talking a walk through the Olympic park. 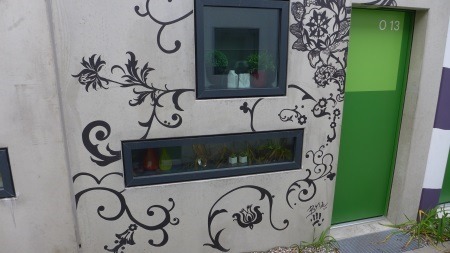 The bungalows of the Olympic Village in Munich have display windows. The residents there showcase themselves – sometimes in playful, decorative, funny, ambitious, and even profane ways.

The bungalow complex was built for the athletes of the 1972 Olympic Games. Today, students live in the 1,000 tiny houses. The village was in a bad state of repair for a long time. Between 2007 and 2010, it was torn down except for a few rows of houses and completely rebuilt in almost the exact same design. As we walked past the facades which were painted with great care and effort, we admired the ideas of the residents.

Each house facade has two window displays. Almost always, they are decorated – with everything from bonsais and cactuses to concert tickets, drawings, postcards with sayings, and plastic action figures. Exotic and everyday items are arranged as miniature installations, which art aficionados would call “ready-mades” or “Objet trouvés”. We wondered about the original structural purpose of these window displays and asked one of the students who had just walked out of her door. She presented an arrangement consisting of an advent calendar, postcards, a rubber duck, glasses, tiny framed pictures, and empty cans. She didn’t know what the original purpose of the window display was either, but said that people use them like a cupboard from the inside. A second student who joined the conversation joked that he abused his “cupboard” as garbage cans. My observation that most of the window displays appeared to be intentional and meticulously arranged irritated both of the students. And both seemed to be embarrassed that the architecture here has created a culture in which people’s lives are being put on display.

That reminded me of our “cheerleading” efforts on one hand and our KPI monitors in the works on the other. We always start meetings involving difficult topics with an introductory round where every person reports three things that he or she has done really well in recent times. The others can ask questions for clarification, but they can neither comment nor criticize what has been said. We can really feel that this tactic can satisfy the innate human desire for acknowledgement although people are giving it to themselves. At any rate, it has a great, positive influence on our meetings.

On the KPI monitors that are hanging in the hallways of our R&D wing, the programmers proudly display the results of their work. All we needed to do is hang the monitors on the wall and explain the idea. The developers now take care of updating the monitor content themselves – and they do it gladly. In our new floor that we are currently furnishing, each room should receive an electronic display window so that the rather abstract day-to-day tasks in a software company can become tangible again. It is frustrating, however, that a walk through the current office environments only shows that people are working on computers. What they are doing, exactly, is unclear. Now, we are about to change that.

On the way back to our car, we talked about how these ideas have a lot to do with the success of Facebook, which I believe has to do with the fact that you can give even the most trivial everyday experience an endless platform. I asked my son how he would call the installations of the Olympic Village in this connotation. “Physbook”, he replied.