We recently received an open letter about the possibilities and limitations of software from Eberhard Heins, the editor in chief of a German journal for Business Intelligence. Here is a rough translation of our response:

The following points come to my mind in response to your question.

First of all, exaggerations just blur our vision and obstruct progress. An esteemed U.S. colleague recently told me: “Whenever people talk about ‘predictive analytics’, you know for sure: They never tried to do forecasting themselves.” Crystal balls do not exist. Even the physicist and Nobel Prize winner Niels Bohr has allegedly said that it is difficult to make predictions, especially about the future. The commotion about allegedly newer forms of prediction is reignited every few years and then dies down again. What really is amazing, though, is how superficially this topic is often treated. When I read that somewhere people can now make “precise predictions” or when the achievements of a person such as Nate Silver are elevated to mystical proportions, I get irritated. Nate improved the election prognoses for Barack Obama through a great deal of hard work and organizational talent – of his own and that of his enormous team. But all in all, that has little to do with data analysis. Even Nate speaks out against exaggerations in the introduction of his book “The Signal and the Noise”. 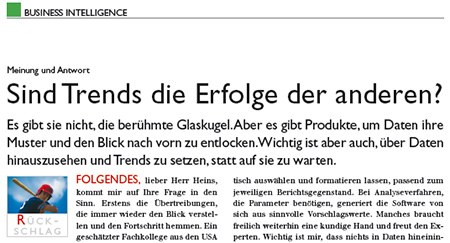 Secondly, it is true that our products offer many capabilities to uncover patterns in data and direct the user’s attention to the future. These include a broad spectrum of methods as well as the right visualizations. Humans are very good at recognizing and analyzing patterns intuitively – provided that they can view them simultaneously in an unaltered manner. Through various algorithms and robust default settings in our software, for example, we ensure that time series have a comparable scale and portray data honestly. In our graphical tables, users can automatically select and format visualization ele­ments in a way that is appropriate for the report’s content. In the case of analytic methods that require parameters, the software automatically suggests logical values. Some features, of course, are designed for professional analysts only. What is important to us, however, is that things that don’t exist are not interpreted into the data. If we could not address certain aspects in the software (to date), we try to communicate them to users in a different way. For example, our blogs discuss the pitfalls of overhasty visualizations by showing wrong examples from public sources and how we would correct them. In a posting about methods for recognizing time patterns, we have discussed the algorithm that you described in your letter. Over the past twenty years, we have researched how computers can find regularities in data so that users have more time to think about their meaning and consequences. We provide these types of algorithms in standard software in order to radically reduce the time, costs, and prior knowledge people need to use the data.

The third point is the most important to me from a managerial perspective. We advise our clients (and our own employees for that matter) NOT to predict the future. Instead, they should drive it themselves as part of a continual process that involves planning, analysis, and reporting – in other words, Business Intelligence. We would have no iPhone and Cayenne today if Steve Jobs and Porsche did not have the courage to look beyond their data and make trends instead of waiting for them. Companies cannot exist without the will power, decisiveness, ambition, and courage of their management. I often think – and the examples that you mentioned are proof – that trends are the successes of others.