Sportlines: The first sparklines in a German newspaper

Sparklines are a breathtaking intellectual delight. Especially on paper. Now we have also tried it on newsprint. In Traffic News-to-go.

Back in the summer and fall of 2005, in my euphoric verve for sparklines I called a large German publisher for business newspapers multiple times. My request: Since publishing companies are generally afraid of the Internet, I thought they might want to try something new that wouldn’t work well in the Web due to the poor resolution – namely to paint sparklines. Thereby we could proof that paper has a future – as long as we print on precious paper something that is worth the effort. They thought it over, thought it over some more, and decided against it as of today. In the meantime, the same company even relaunched one of its major publications, also without incorporating sparklines. 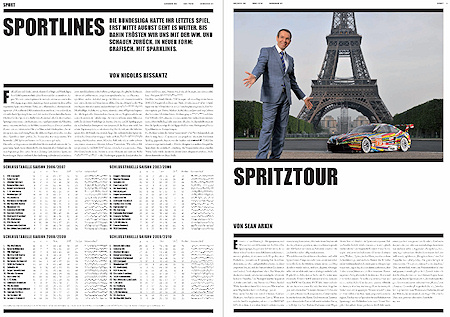 Yes, we can: Sporty Sparklines on paper, in the June edition of Traffic News-to-go. Next to Jeff Koons.

As a reader of various newspapers, I soon had the impression that many publications started to counter the drop in advertising and circulation by cutting costs in the wrong places – namely by hiring less-expensive authors who, in turn, spent less time researching and writing their poorer stories.

That depressed me so much and I decided to let Bella handle the missionary work with the press from thereon in. What sparked my interest again was when Murat Suner, a good friend of mine back in grad school, became co-editor of Traffic News-to-go.

Murat, whose family comes from Istanbul, was already quite a pioneer in his earlier days. Together with a few likeminded students, he founded a highly respected organization that was dedicated to convincing the European elite that the cultural differences between the Orient and Occident don’t have to lead to the clash of the civilizations as many believed back at that time. The German newspaper FAZ also recognized and honored its work with a front-page story in 1993. 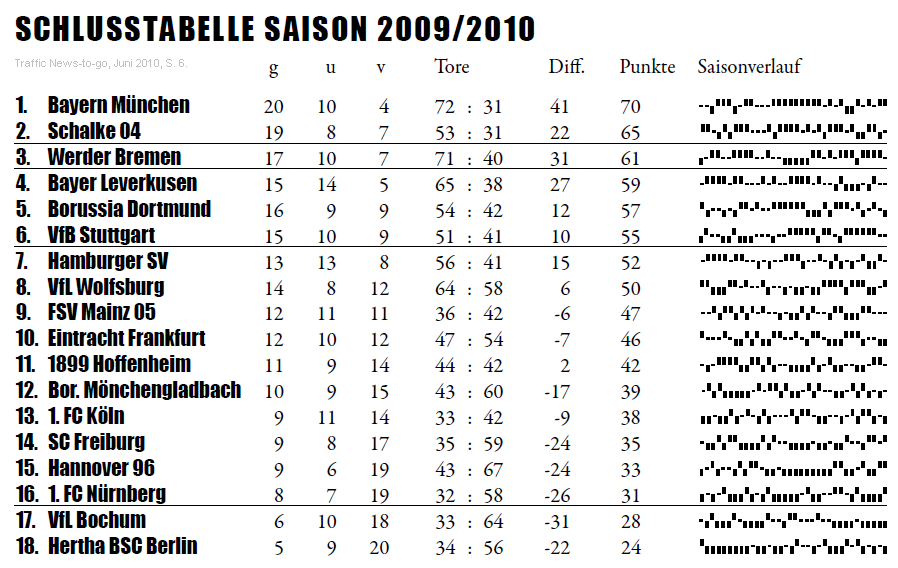 Sparklines in the same size on paper, however, are crystal clear. In the Web you can only read them partly and enlarged.

Traffic, which debuted back in December 2009, was already honored by the Lead Academy as a “Newcomer of the Year” in March 2010. This monthly publication is handed out at no charge from Traffic newsboys and girls sporting traditional knickerbockers and caps and is available in select locations in Berlin, Hamburg, Zurich and Amsterdam.

Together, we decided to reflect on the advantages of paper and do something that was long overdue: to print sparklines in a newspaper. And we did that for the first time ever in Germany in the June edition. As appropriate for this time of the year, we focused on soccer and used the dichotomous sparklines that Edward Tufte first introduced to us.

We created the sparklines using SparkMaker, a tool which anyone can use to test sparklines since 2005, and wrote sentences that used the miniature series of wins and losses as adjectives or verbs. For example, we described the path to Bayern Munich’s current championship title as

. A medio– cre start with few losses quickly led into an inspiring midseason series of wins – the longest of any team this season as a quick glance at the other patterns in the table shows.

We described our observations and delivered the evidence right next to them. This new kind of argumentative cross-linking is so exciting and enjoyable because it challenges our minds. There are some things that just belong on paper and others that belong in the Internet – like this blog, for example.