Is the mouse an endangered species? Are iPads and iPhones making their users computer illiterate because they now only use things that they can operate with their thumbs? And is this good or bad news for Business Intelligence? That depends on how consequent people are.

In Berlin, we will soon be talking about “Emotional Management Information” (in German) – partially because all our efforts in collecting, saving, preparing, and presenting data in Business Intelligence are useless if the data has no effect. To generate an effect, we need to reach our recipients’ hearts as well as their brains. After all, we use emotions to help evaluate things and decide how we should invest the scarce resource of time every second of the day. iPhones and iPads emotionally charge reports because these media have so many fans. To ensure that the reports can live up to people’s expectations for these devices, however, we have to invent the right format – and for Business Intelligence that gets a bit complicated. 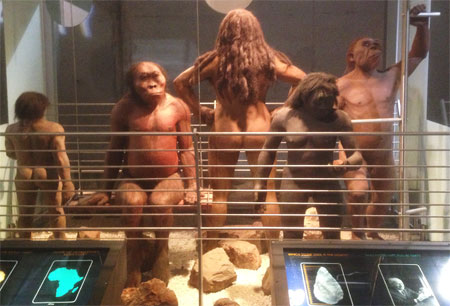 Touch gestures bring us back to the beginnings of evolution when the first tools were being developed. If we approach things too naively, we could also fall back to a primitive stage in the evolution of Business Intelligence as well.

The emotional effect of data has something to do with being responsible for it. In other words, what happens when the data presents good or bad news to the reader? How data is presented can determine if the recipient ever even reads it. The fundamentals for presenting data are changing dramatically – and so is the danger that the very last stretch in Business Intelligence will determine if all the efforts spent on collecting, saving, preparing, and presenting data have been wasted. These are the reasons:

Swipe once, see it slide, type four times, and it is ready to use. In the iPhone’s operating system, you truly feel how nice touch navigations can be. In most apps, however, you also sense where its limitations are.

It doesn’t get any sleeker than this. These functions combine as little user action as possible with only as much system reaction as necessary:

A light effect focuses your attention on the unlock key and shows the correct direction of the swiping movement.

In place of the current time, you now see “Enter code”. The numeric keypad drives into sight and the fourth number dually functions as return key.

With this in mind, Business Intelligence could be faced with a task that is indeed hard to solve. In many companies, non-mobile reports have yet to develop their desired effect. Now, these same applications are supposed to go mobile with interaction paradigms that are 1.) not fully understood in BI, 2.) possibly on multiple platforms, and 3.) not native, in other words, with not-so-elegant handling. Based on our assessments, the productivity of BI applications will first drop before solutions are found that actually benefit from finger gestures. We perceive both the pressure towards simplification and the necessity to focus much more deeply on the business tasks of users as being positive. That is sobering to some degree – but that’s okay because we need to be levelheaded in order to trigger the appropriate emotions from the recipients of our reports through a cool, calculated design. You’ll hear more about our suggestions soon in Berlin (in German).