Actually, we wanted to keep this to ourselves a bit longer. But before someone else copies it and takes all the credit, we’re announcing it now: Peeking through the keyhole is out. Panoramic views are the future way of working in financial controlling…and elsewhere.

When we get together to work in a group, it looks like this: At the front end of our conference room is a white projection wall approximately six feet high and ten feet wide. Every company has something similar. Onto this area, we project the screen of a laptop, which we use to record the fruits of our labors. Thanks to the LCD projector, everyone has these results constantly before their eyes. 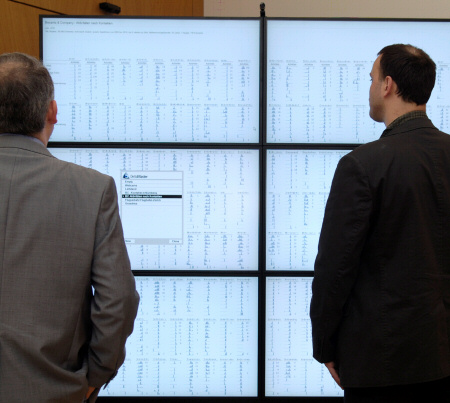 In other words, the front end of our conference room displays 1024 x 768 pixels on a good 5 square meters of wall area. In most meetings, we work, show, see, think, and decide with this resolution. Handouts on the table easily increase the resolution. In most cases, however, people tend to be satisfied with a succession of PowerPoint slides and have, at best, the same slides and an agenda in front of them on paper.

At the back of our conference room, we have set up a monitor wall comprising nine 46-inch monitors. Together, they also represent an area of a good 5 square meters but deliver 19 million pixels, which is about 24 times the resolution. On the monitor wall, we see what we want to talk about. Since we have so much space, we see things next to each other and at the same time instead of in isolation and one at a time.

Sometimes, this is the only way to get the overall picture. We once showed an architect the way we work. He immediately understood the principle. He still discusses most of his projects on paper because a screen simply doesn’t provide enough space. The screen either shrinks everything beyond recognition or the zoomed-in view doesn’t show enough context. 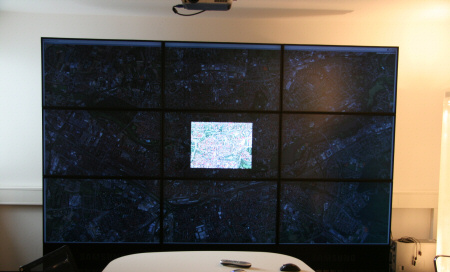 Hard to believe but true: The bright rectangle in the middle represents 1024 x 768 pixels. That is what an LCD projector normally shows – it needs an area equivalent to that of nine 46-inch monitors to achieve the same degree of legibility. Source: DeltaMaster Gate.

The same principle applies with maps. With a resolution of 19 megapixels, you see the entire city of Nuremberg. With an LCD projector, you don’t even get outside of the old city walls. Incidentally, the 1920 x 1080 pixels offered by HD LCD projectors don’t change anything: They are wider and therefore primarily for watching movies. In the business world, they are awkward because most of the screens on laptops and desks have a different resolution and changing the format takes time and effort.

With the aid of our monitor wall, we work, show, see, think, and decide with 24 times more information than available the conventional way. When we ponder over our Web site, entire sections of it fit completely onto the wall and are still legible. When we discuss sales, we see a large number of our customers and not just a few, select ones. When we edit an article for business journals, we take in all the sections, pictures, and attachments without having to scroll. When we plan events, we have the venues, guests and topics before us all in one go. That does us good. We’re clicking less, seeing a lot, and thinking more. Admittedly, it helped that we were able to write the software for our wall – “DeltaMaster Gate” – ourselves.

You could also look at it this way: We have increased the productivity of our conference room by a factor of 24. Just imagine if some other technology had been able to achieve such a boost in performance from one generation to the next.

We believe that you should work the way we do.