Last time, we unveiled the secret of our monitor wall. Today, we’ll go one room further and show you what else you can do with a wall full of on-screen parameters – besides, of course, stealing the show from the PowerPoint people.

In most companies, people have gotten used to the limitations of computer screens. If things don’t fit, you simply don’t place them next to each other. You could, of course, fix that problem with paper, which has a much higher resolution than a computer screen. But it also entails a considerable amount of work. You first need to use a screen to create a physical page. But since that page doesn’t fit on the screen, you have to make the items smaller and larger as well as do a lot of moving and scrolling. That’s extremely tedious.

The world’s most aggressive automobile manufacturer is investing heavily in increased resolution – for marketing and corporate management.


This awkward situation has changed for the better. Since large screens are flatter and less expensive than they were in the past, you can place more screen space on desks and office walls for the same money. That’s good news for both the human eye-brain system, which can take in large quantities of pixels with ease, and our hardware budgets.

Back in March 2008, I still looked to astronauts with envy. The last thing you want with critical technical missions is bottlenecks due to the amount of information that needs to be taken in at the same time. As a result, aerospace mission control centers equip their control rooms with as many large monitors as possible. As do utility companies, television stations, traffic control centers, and emergency call centers as well.

Back then, we would have loved to use something similar to manage our own company. Controlling 6 or 9 monitors through a single PC, however, wasn’t possible due to the lack of graphics hardware. Using several PCs at the same time for a single monitor wall, in turn, would have been complicated and expensive – which wouldn’t have been a great example for our clients to follow. Fortunately, we didn’t have to hold off on our project for long. The development of graphic cards took a giant leap forward. Suddenly, we could manage up to 16 monitors from a single PC, at a decent price to boot. So we got down to work.

A report on Hyundai in the January 2010 issue of Fortune gave us an added push. The South Korean company has resolved to aggressively expand its market share with the help of a massive quality offensive. Hyundai’s Global Command and Control Center supports this mission by monitoring the group’s global activities 24 hours a day, 7 days a week. Dozens of computer screens present images, videos, and data. The shipment of parts is tracked from the suppliers right through to the assembly plants. Cameras show the assembly lines, monitor the R&D activities in Europe, Japan, and North America and even follow the test drives. There you have it – whoever wants to achieve something on the market invests in higher resolution for business management.

Incidentally, Hyundai doesn’t skimp on resolution in its marketing either. The automobile manufacturer posted billboards stretching a distance of several hundred meters on a construction fence at Frankfurt Airport. I rolled by it several times while stuck in stop-and-go traffic. The windshield of my car became a cinema screen for an advertisement. 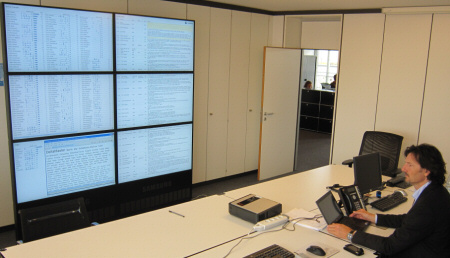 Our “control center”: A monitor wall consisting of six screens with a real-time flow of CRM, support, and development data.

Our own real-time control center went into operation in the spring of 2010. All the information on our daily activities converges here on six monitors. Our DeltaMaster Gate software feeds the data from CRM, support, and development. The system combines textual and statistical information and shows some 1,000 new events each day. Thanks to its design, a quick glance and a scan of short text passages suffice to take in our business activities in a surprising level of detail. So far, so good.

During a presentation for the ICV, I expressed the theory that insights gained from measures are often overrated while the details from business activities are underrated. What is our position now? Have our experiences proven this theory? Yes – and so convincingly that our appetites increased even more while we were eating. We’ll explain how we satisfy our hunger next time.

For today, we’ll close by saying that our control center has brought our management even closer to our operational activities. That means that although we are a midsize company, our management is as integrated into our daily activities as if we were a small business again. We think that’s a good thing.