If you are comfortable enough with presenting data in tables and charts, the next challenge is putting that information into words. The way that Peter Singer backs his positions is an excellent example.

The best things about rules are the exceptions. One of my golden rules is that data belongs in tables or, even better, graphical tables. However, I recently discovered an exception in an article written by Peter Singer, Singer is a Professor for Bioethics at Princeton University and one of the world’s 100 most influential people according to Time magazine. 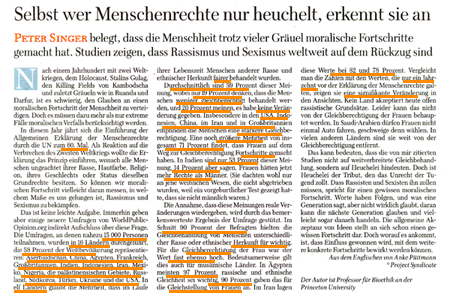 This article contains more numbers and data than many charts! (WAMS, 2008-04-20, p. 13). Please click to enlarge. Also available in an English version

Singer’s article is an impressive example for serious, analytical reasoning that truly makes an impact on his audience. The main message is clearly stated in the title – where it belongs. Singer makes his point and then brings the evidence to back it. He shows distance to his subject, names the possible antithesis, states the criteria for measuring the subject matter, and describes his sources.

Using the survey results from WorldPublicOpinion.org, Singer then embarks on a purely verbal tour de force on the topic of discrimination. Data and argumentation are linked in a compact, homogenous unit. The details of the survey are condensed into words. The following sentence, for example, replaces an entire bar chart containing 48 data values from the original survey with just 25 words:

“In 11 of these countries, most people believe that, over their lifetimes, people of different races and ethnicities have come to be treated more equally.”

In comparison, you can clearly see the verbal presentation of the data has a much stronger effect than the data itself. The author selects and evaluates information for the reader. This is a powerful weapon that can be used – or abused – accordingly. Singer knows how to use it. The rest of us, however, still need a bit of practice.