It is vacation. We are playing Mia. Two adults, two teenagers, Hannes (15) and Christoph (16), who both will soon be towering over us. Showdown. There are two players left at the table. Each one has a matchstick, in other words, a life. I call “Two sixes”. Christoph, better known as ‘Bimpfi’, can only counter with ‘Mia’, the only roll that can beat double sixes. Bimpfi mumbles, “C’mon luck. Help me.” He rolls the dice and melds “Mia!”. I can’t believe it and start to think. 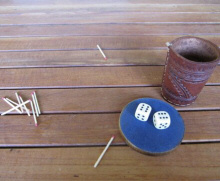 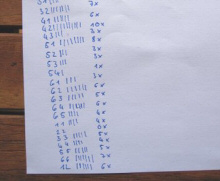 You can learn a lot from a few matchsticks, a cube, a pair of dice and many rolls – for data analysis, life and working with forecasts.

I now have a forecasting problem. I wrack my brain trying to remember the game theory. Cooperative behavior is often the best strategy to face real-world problems – and I think that the same applies in Mia. What’s unique about this game is only the player that has rolled the dice knows what he rolled and, even more interesting, the player can bluff and announce a different result. The next player must top that announce – either in actuality or with a bluff. If he believes that the previous player has lied, he can look at the dice. If he did bluff, the previous player will lose one of his five matchsticks. If he didn’t, the doubting player will lose two matchsticks. We have come to the conclusion, more experimentally than statistically, that a player who doubts too much is out of the game quickly. The chances to get by with a lucky roll or a bluff are better than those trying to catch someone lying in the act.

Right now, however, that doesn’t help me much. Bimpfi and I only have one life left. According to the rules I can accept his ‘Mia’ unseen, give up a life, and start a new round. But since I only have one life left, I would lose the round and the game. Of course, I could also try to call his bluff. So I asked myself, if the theory of probability could help me out. The chance that Bimpfi would roll a ‘Mia’ at the critical moment seems a bit unlikely. The probability to roll each combination of the dice is generally the same, such is dicing. But in this case, I think that conditional probability applies. Bimpfi can roll the following combinations: 31, 32, 41, 42, 43, 51, 52, 53, 54, 61, 62, 63, 64, 65, double ones, double twos, double threes, double fours, double fives, double sixes and 21 (Mia) for a total of 36 combinations. Only two non-double combinations can be diced with two possibilities; only two of them can help him now (21 and 12). My chance, winning by doubt, is in 34/36 (=17/18) cases right, only in 2/36 (=1/18) has Bimpfi a Mia. I forecast my win.

Still I stop and think. Could a trend calculation help back my forecast? After all, I had already won several games. Another win would continue that trend. On the other hand, Bimpfi literally has the luck of the dice in our little group. This kind of lucky roll would fit in his game statistics. And as I know from business and election projections: you can’t count on forecasts. Almanacs are filled by experts and statisticians with incorrect projections and assessments as well as forecasts that have been changed time and time again. Niels Bohr, a recipient for the Nobel Prize for Physics, once said, “Prediction is very difficult, especially about the future.” And with that statement he also meant that the more that people understand about forecasts, the less they think something is predictable.

Dire as my situation was, I tried psychology. Did Bimpfi’s voice sound treasonous as he said ‘Mia’? Did the corners of his lips quiver? Did he touch his nose? Is he making a poker face? Does he even know the rules? Is he acting like a homo oeconomicus – in other words, rationally? Well, yes. Absolutely. He, too, is stuck between a rock and a hard place. With my double sixes and one matchstick life, the only thing that can save him is a ‘Mia’ – and only a real one.

I soon had to make a decision. A short while back, we wrote about forecasts and criticized how charts present vague forecasts the same way that they show known historical values. As a reader, I miss information on the margins of fluctuation, proof of uncertaintyor the presentation of related scenarios. Entrepreneurs will always ask themselves if they can live with the worst case scenario and, if not, if they are taking the necessary precautions today.

So realizing that I can live with a defeat, I decide to stick with my projection for victory and look at Bimpfi’s dice. Mia.