“Die Welt” recently made a first attempt to use sparklines. Shrunken graphics with dubious references and problematic scales, however, were the result. Too bad! The good news, however, is that the race for the first sparklines in a German newspaper is still on.

About four weeks ago, a colleague entered my office and announced ecstatically, “’Die Welt’ printed its first sparklines!” He was excited – as was I. With great suspense we bent over to examine the March 16th issue of the German newspaper. The longer we looked, the longer our faces became. Why? 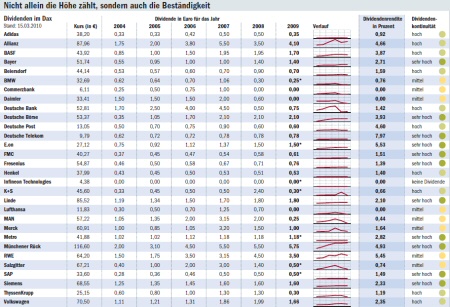 When we ponder over the table a bit longer, the design isn’t the only thing that gets us thinking. Absolute dividends primarily interest major stockholders who hold onto their shares for a very long time and ignore gains in the stock price because they don’t want to sell them in the first place. Everyone else, however, is interested in the relative dividend yield. That, in turn, depends on which price each individual purchased his or her shares. Every other price only serves as an orientation. Since share prices fluctuate greatly in general, continuity is a criterion that has a connotation it doesn’t deserve. A normal shareholder would not view something that continuously changes as being continuous.

A headline above the table translates as: “The height as well as the continuity counts.” That’s confusing for large shareholders. I would prefer if it had said, “We don’t know how the shares will develop tomorrow either. Be careful.”