I think that iPhones, iPods and iPads are great. But I think it’s ridiculous to declare – as the journalists in ‘Die Zeit’ recently did* – that paper has met its match and the print media will be the first to go belly up. Here’s my digital plea for analog media.

Last weekend, I visited my Aunt Lisbeth. On her walls hung two picture frames filled with photos from Eastern Prussia. Whoever had a camera back then knew really how to use one. The composition of most of the photos was simply exhilarating. Aunt Lisbeth took the frames off the wall and dusted them off so that we could study the pictures together. Her mother had carried them in her purse while she fled over a frozen lagoon from the advancing Soviet army. Paper is thin and delicate – yet it even outlasts world wars. Data, in contrast, sometimes doesn’t even survive the next software update. At any rate, I highly doubt that my grandchildren will bend down to take a closer look at my collection of digital photos 70 years from now. Paper ages with – and even outlives – us. 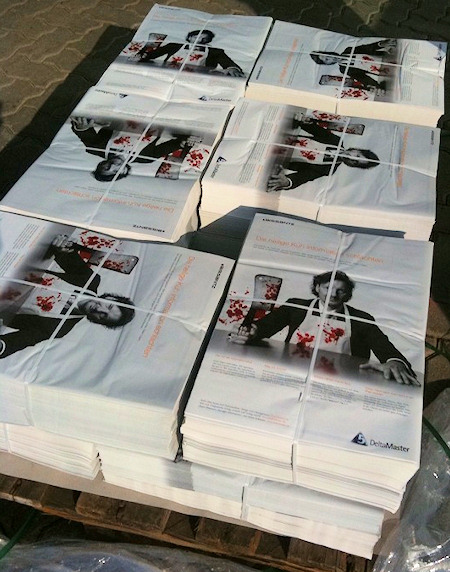 We congratulate Traffic – News to go: In a time when others are shutting down the presses, this monthly magazine was honored by Lead Awards as the ‘Newcomer of the Year’. We immediately booked the back cover for six months.

I never travel without a laptop or newspaper. And the last time we were making the final approach to Nuremburg, I was convinced that my time on earth was up as well. Since all electronic devices were already forbidden, I simply held my newspaper even tighter and kept on reading when, suddenly, we had a surprisingly smooth landing. I instantly had a new appreciation for what I was reading. It even saved me during the long, boring wait for the bus and during the entire bus ride as well. A newspaper never crashes but offers comfort when you think that you are going to crash yourself. Plus, it’s harmless during the take off as well. Paper instantly gives you something to hold on to – anytime and anywhere.

I don’t remember how we got on this subject, but my father recently mentioned that he only reads articles in newspapers on topics that he otherwise would never think about. Why? They are located next to the articles which he originally intended to read. That never happened so far when he Googled articles. A good newspaper is as colorful as the world we live in – and is much livelier than the Internet in the same space. Paper is inspiring.

My last digital camera held up for four weeks. The fact that I attempted to sneak up on a mating pair of seagulls had a lot to do with it. At any rate, the objective has made a strange noise since then. The camera landed – unrepaired – in a drawer. The display had annoyed me for a while anyway. You could hardly use it in the sun – and isn’t that when most motives look their best anyway? How is that with the display of an iPad? I even enjoy reading my Sunday newspaper at the beach. In addition to handling a light drizzle, newspapers are even compatible with sunglasses. Paper is always easy to read.

I recently came across a special edition of Kafka’s short story ‘Ein Hungerkünstler’ in a museum bookstore. The graphic artist Jürgen Schlotter had designed it and received several prizes for his work. The typeface used symbolizes the inner conflict of the protagonist of the story. Schlotter created the font himself by roughly carving the letters of the alphabet in linoleum. Its layout, typography and binding are a sheer pleasure for book lovers. This type of effect simply cannot be digitalized. I remember the words of my German teacher who died much too early: “Content and form equal character.” A book is more than just its content. If I just get its content, something else is missing. That’s why we made Bella’s blog into a book (in German) and not vice versa. The amount of work involved showed us that if you can only do the job electronically, you haven’t mastered it entirely. Paper is touchable.

Each morning, the CFO of a long-established Swiss bank receives a compact, A3 sized report which he then pins to the wall behind his desk. The report is filled with the latest, relevant data. On the monitor on top of his desk, all of these numbers would only fit with the help of a long scroll bar. That just goes to show how large the resolution difference is between monitors and paper. Paper has space – for numbers, data and ideas.

“Die Welt” recently used sparklines in its March 16th edition. To my knowledge, it is the first German newspaper that made an attempt to use them. Although it didn’t follow all of Bella’s guidelines, this attempt shows that sparklines will never look as nice on a computer screen. This again has to do with the difference in resolution. If the print media just recognized the advantage they have, they would have a long, bright future ahead of them. Paper definitely has future.

In other words, paper is here to stay for a while – and will remain a benchmark for everything we do on monitors.