“Radical” is a word that has many different connotations – many of which are not exactly gentle. Today, we’ll use it again to describe the next necessary steps for management information. And we can learn what radical really means from the story of an old house.

On my recent trip to New Zealand, I was searching for a Bed and Breakfast in Titirangi, an Auckland suburb which many artists and writers have made their home. I pounded the streets and tried my luck at the few available options. To be exact, there were three. Two of them were booked out and the third was closed – but so attractive that I did everything in my power to track down the owners. I tried neighbors, the Internet, the phone directory and even a restaurant close by. That took time but in the end I was in luck. As the charming hosts Bev and Julian soon told me, I apparently wasn’t the only person upon whom the house exerted some type of magical force. Their B&B recently won the Enduring Architecture Award. 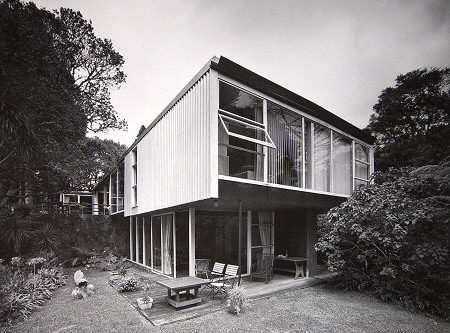 The style of the B&B is what you would call Classic Modern. Bill Haresnape, who built the house in 1958, was inspired by the works of famous architects including Ray and Charles Eames, Richard Neutra, Frank Lloyd Wright and Mies van der Rohe. I had one-and-a-half days to experience and study the house more closely. Never before had I witnessed such all-out attention to detail. Obviously, no effort or expense had been too great to achieve the desired effect. Similar to the works of the aforementioned architectural role models, the interior and exterior spaces flow into each other. The house is truly at one with the hilly backdrop of the rain forest setting. In fact, the house almost seems to hover halfway above the woods due to its light frame construction, projecting levels and large window surfaces. The architect built it with his own hands. The wood from the trees, which were cut down to build the house, were then used to create the staircases and other details. Haresnape transported the trunks on the roof of an old car to the right spots. As his wife drove, he followed behind to ensure that the load didn’t get stuck in the curves of the tight driveway.

Auckland has a maritime climate. The sun, clouds, and rain showers alternate off and on several times on a single day. The surrounding rain forest, the sky, the colors of the ocean, as well as the sound of the rain on the patio, in the trees, and on the house’s roof and skylights create a constant, lively, natural wonder which perfectly embraces every person in the house.

All windows and glassed-in areas act as pictures of the environment with the house and walls serving as the frame. The effect is simply breathtaking. The house provides a welcome shelter against the immediate effects of the rain and sun, yet allows the people inside to experience the outdoors in a way that you only can, for example, on the Mediterranean coast in the summer.

This effect is achieved through a radical architecture that breaks with all conventions that are cheap to create or simple to maintain. What may be a nightmare for housewives is simply a delight to view from every angle. A few small details create the perfect connection between the indoors and outdoors. The frames of the sliding windows, which extend to the ceiling vertically and to the ends of the walls horizontally, flush with the floors. The wooden ceilings made of indigenous beach wood partially stretch to the underside of the roof outside. The adjacent, flushed glass surface appears as a mirrored view both inside and out. Many small, vertical sky lights provide a glimpse into the canopy of the rain forest and close the environment in the vertical, visual axis. Since the higher main level is surrounding by the original trees, you get the impression that you are living among them. The large fireplace, which is open from both sides and practically stands in the middle of the room, is trimmed with the same natural stones inside the house and above the roof. Thanks to the skylights, you can observe that directly from the living room. That, too, strengthens the impression that the room hosts a powerful, archaic hearth instead of a regular domestic fireplace. The kitchen, dining and living areas are all completely open and connected – a novel idea in the 1950’s.

Interestingly, the design of the house almost works better fifty years later because our modern living conditions have increased our innate desire to be closer to nature. But how does the design of the Haresnape House inspire us to create a new concept for software-supported business management?

The Haresnape House is radical in the sense that no effort had been too great to create something non-transient. This, in turn, is backed by the non-compromising alignment to create an archaic place to live. Fully equipped with all amenities, this house combines the full comfort of the indoors with the permanent sights and sounds of the outdoors that show the spectacle of nature.

So why am I mentioning this here, you ask? If we want to create anything that isn’t transient, we need to rediscover its original purpose and then subordinate everything else – including the time and work involved – in order to fulfill that purpose. Since managers are meant to manage their companies and not read reports, we need to examine their true purpose much more thoroughly and in a completely new light. The radicalism of the Haresnape House inspired me greatly. To what extent and for what purpose, you’ll find out here…someday.