I can’t stop thinking about Berlin. Let’s head once again into the ballroom and look up at what was once a gallery. Bank managers used to stand up there many years ago. Do we need to observe something to supervise it? What is the right perspective for viewing data?

One of the reasons that we like to host conferences in the ballroom of Berlin’s Hotel de Rome is its architecture. Behind the closed arches on the upper floor was once a gallery. From there, the directors of the former bank had a clear view of what was happening down in the service counter area. Of course, we don’t know if bank directors used it back then, but we certainly wish they did today – at least when we are standing in a long line. I have thought about this concept of supervision through observation many times since we first used the ballroom back in 2007. 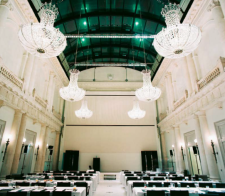 The ballroom of the Hotel de Rome – previously, when it was still the service counter area of a bank, and today. Should we directly watch what is happening around us more often?

At the very least, the managers could observe the bank’s daily business with their own eyes. Customer frequency, processes, workloads, duration at the counter, customer behavior, and service levels were all revealed just by merely watching. I was thinking about this when I took my car to the dealership for repairs last year. The managing director invited me in for a cup of coffee and I told him about my thoughts. He said that he once had a glass office with a similar view of the repair shop and sales room. That view alone had made him feel much better informed than the dealership’s standard software was now able to. His new office was more comfortable but it was also in a more remote location. Here, he felt isolated and had to practice “Management by Walking Around”. In his opinion, however, he rarely had the time to do that.

Reinhold Messner, this year’s guest in the ballroom, had a different opinion on supervision through observation. “In mountain climbing, you don’t have a better view from up above.” If you looked at the steep face of an 8,000-meter mountain from the top, you would only see dreary darkness. For us listeners, simply the thought of leaning over and peering down those mountains was enough to give us goose bumps. Messner said that if he viewed a mountain face from a certain distance and with respect, his experience and intuition showed him the right path for his ascent and descent – even if that mountain was 5,000 meters high.

Gunnar Reddemann from the Paul Gerhard Diakonie made it clear that managers will only be taken seriously and be able to lead if they have the right view of their business – and that, of course, includes the details.

Uli Drautz from Bechtle AG and Gunnar Reddemann from the Paul Gerhard Diakonie healthcare group, two speakers in Berlin, said that operative units only viewed managers that have enough detailed knowledge as serious business partners. In this case, ‘detailed’ also means that management and the operative units speak about the same specific performance factors, such as diagnoses as the cost driver for material consumption, as Reddemann explained.

Yesterday, Reddemann stopped by for a visit. We continued this discussion and let ourselves be inspired by Messner’s view of the mountain. If we aren’t satisfied with the results of business activities, the path that we have travelled has not led us to our desired destination. Experienced managers examine the processes in their companies – on site and with their own eyes. In other words, supervision by observation. But they can’t be everywhere all of the time. Reddemann said that bottlenecked resources had the greatest impact on the hospital’s contribution margin. Examining these processes would be a job for management that no hospital director would find boring, no matter how much detail was shown. And if these processes needed to be optimized, this must be done together by the doctors and management. Gentle hints from a financial controller would not suffice.

We thought about this a bit more and came to the conclusion that every company has process data. If prepared and displayed well, this data could supplement, oftentimes replace, and even exceed the actual view of a manager on site because we can slice and dice it. That would be similar to viewing the path itself and not just how far we have deviated from our desired destination.

In the afternoon, I picked up my car with brand new tires from the same dealership that I mentioned earlier. In the meantime, the managing director who told me about his view from his former glass office has moved on. At the reception desk, I signed the bill – with a pen that advertised a towing service. I looked around and all three ladies at the desk were using these pens. I was appalled. “I can’t believe that you aren’t using the pens from your own company,” I said as I explained my facial expression. “And I don’t even want to think about anyone having to tow away your cars.” If only the boss had seen that…