It seems that nothing can shake people’s confidence in traffic light systems. Günther Beckstein, a former Bavarian Minister of the Interior and later Bavarian Prime Minister, tried to use them to protect the state-owned bank BayernLB from damage – to no avail. Now Franz Josef Nick, CEO of Targobank, wants to use them to protect uneasy investors. And who is protecting us from the people protecting us?

Easter. While the sun was shining in Germany, it was raining in Southern France – a day for going to a museum. I had wanted to visit the Musée National Fernand Léger in Biot for some time but Léger’s somewhat dreary style of Cubism and the part you could see from the outside had kept me from doing it. Now was the time. 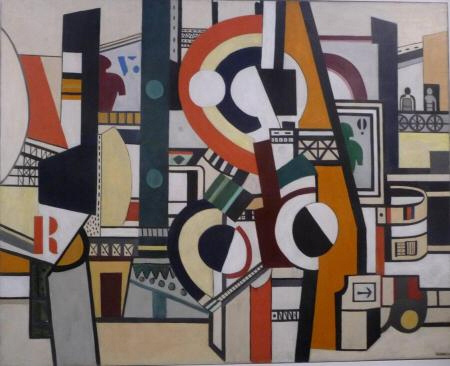 Fernand Léger, Les disques dans la ville (1920): The international Esperanto of traffic lights and signs is a relatively new invention. They came with the railroad and automobiles. And the only place where they work so safely that the reduction they provide is justified is with traffic.

Inside, I stared in awe. Léger and many of his contemporaries were inspired by traffic lights and signals. Their works show faith in progress and the aesthetics of signals in a world on the verge of industrialization and motorization. Wonderful … in a museum.

A short time after my return, someone told me the latest news on the situation at BayernLB, where the debate continues as to whether someone can or should be held responsible for its disastrous dealings. Günther Beckstein already gave his opinion on the situation back in January. Beckstein is from Nuremberg, so we aren’t going to mock him here. But his comments in an interview with the German magazine “Der Spiegel” are probably symptomatic – and simply too good not to use for our purposes. This is because, according to “Der Spiegel”, Beckstein had a “Risk Office” that prepared the decisions for him:

“The Minister of the Interior had ordered his people to use a traffic light system to categorize submissions. Green meant ‘okay’, yellow meant ‘attention’, and red meant ‘problems’. ‘There couldn’t have been a better way to organize it,’ said Beckstein resentfully.”
Source (translation by us): Der Spiegel, 2011-01-03, p. 28, or on Spiegel Online.

“730 people in the Risk Office at the bank said that there was no noticeable risk. The Federal Financial Supervisory Authority (BaFin) didn’t express any concerns, the Deutsche Bundesbank didn’t, no one did. But a few politicians are supposed to have psychic powers.”

“But is it okay for bank regulators to delegate their legally stipulated personal responsibilities to the bureaucracy of their ministry? Commercial lawyers point out that at privately owned banks, a member of the supervisory board can be charged with negligence for as little as being absent from a meeting.”

A few days ago, the bank filed a lawsuit for damages against its former executive board. The Public Attorney’s Office is also investigating regarding charges of fraud.

Meanwhile, the debate in Germany continues as to whether we should label groceries and investment products with traffic lights. Berlin already prohibited this type of labeling for groceries. In the case of financial products, the prevailing opinion is that the government should keep its fingers off ratings. Targobank sees no reason to change its current approach:

“The bank uses a green-to-red color scale to symbolize financial indicators such as duration, risk, and returns,” said Franz Josef Nick, CEO of Targobank. “In the future, its customers can see even better which financial product is best suited for which investment goal.”
Source: Targobank press release dated 2010-04-13 (translation by us). 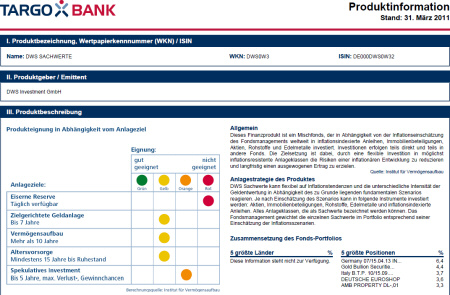 As of 1 July 2011, German regulations came into force stipulating that consumers must receive a short, easy-to-understand and advertisement-free information sheet about the product as part of investment advisory services. Among other things, this sheet should clearly state that the investor assumes an entrepreneurial risk up to and including a total loss. This document very clearly says the following, for example:

“There is a possibility that poor management performance can result in small or even large losses in the price of individual shares or the stock market as a whole. Through the indirect purchase of shares through the funds, investors subject themselves to an entrepreneurial risk as far as the individual stock companies are concerned up to and including a total loss. Investors can reduce this risk by spreading the investment among multiple stocks.”
Source (translation by us): The German Federal Ministry of Food, Agriculture and Consumer Protection, sample product information sheet for equity funds.

How is this all related? Signals don’t only fascinate artists. Presenting information in the most concise manner possible is a virtue that we also highly value. For example, we regularly try to show the benefits of maximizing data density. Responsibility, however, should stay where it belongs – on the level of decision-makers. Otherwise, we merely make them executive figureheads, or ‘breakfast directors’ as we call them in Germany. That’s where people seem to misunderstand things. You cannot delegate responsibility. Managers cannot ask how risky something is. Instead, they need to ask which risks they are taking. Beckstein’s Risk Office needed to describe the risks, and management needed to assess them.

On my way home, just before my driveway, I often have to wait for a red light – even late at night when there is only oncoming traffic every few minutes. You think that you have a complete view of the street from there but, during the day, the post of an underground walkway obstructs the critical meters. Good thing that I don’t have to think about that.