On 8 July 2011, a Space Shuttle flew into space for the last time. Two of its predecessors had crashed thanks to PowerPoint – or rather, the information culture of slide stacks. Here’s why display requirements shouldn’t be allowed to be a bottleneck for communicating information.

The USA regularly sent vessels of the Space Shuttle type into space starting in 1981. A total of 135 times including the final lift-off. Two missions ended tragically: On 28 January 1986, the Challenger exploded seconds after the launch; 17 years later on 1 March 2003, the Columbia was destroyed while re-entering the earth’s atmosphere. 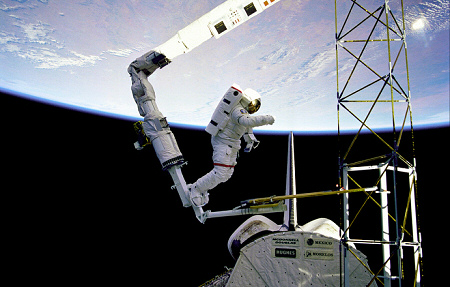 Projectors and PowerPoint usually suffice for projecting photos, quotes, and advertisements – but rarely for context, correlations, and causality.

Only ostensibly did the Challenger catastrophe have a technical cause: low temperatures the night before and on the morning of the launch had reduced the elasticity of the O-ring seal. Hot gases exceeding 1,000°C escaped and damaged an attachment strut connected to the external fuel tanks. The tanks hit the solid rocket boosters, ripped open, and exploded.

The Presidential Commission on the Space Shuttle Challenger Accident examined the disaster carefully and “[…] concluded that there was a serious flaw in the decision making process […] Had these matters been clearly stated […] it seems likely that the launch of 51-L might not have occurred when it did.” (1)

On the night before the launch, the engineers of the shuttle manufacturer Morton Thiokol had warned of potential problems with the O-ring seal. In the past, this seal had often been damaged when external temperatures fell below 19°C. The forecast for the launch indicated frost. The engineers summarized their arguments in 13 slides. NASA and the Thiokol management discussed them until midnight. As history has shown, the engineers drew the right conclusions. The way they presented their arguments, however, didn’t convince NASA. Even the management at Thiokol finally gave up their original resistance. The launch was cleared. The Challenger exploded.

Edward Tufte later examined these slides in his book “Visual Explanations”. Although they contained the information that should have prevented the launch, the slides were very confusing and provided many blatant opportunities to question the engineers’ arguments.

Seventeen years later on 1 February 2003, the Space Shuttle Columbia exploded while re-entering the earth’s atmosphere. During the launch, part of the insulation of the external tank had become detached. The debris had hit a wing and damaged the thermal shield. NASA’s Mission Control Center registered the incident and discussed the possible implications while the Columbia completed its mission in space. NASA assessed the incident as noncritical and gave the go-ahead for the Space Shuttle’s return. The Columbia disintegrated.

As in the case of the Challenger, the decision-making documents submitted to management were subjected to scrutiny. Here, too, the official investigating commission found a correlation between the presentation and the wrong decision. This time, the blame was also pinned on PowerPoint, the computer program that was used to display the presentation slides. Or rather the blame was attached to the information culture of slide stacks. NASA had switched to PowerPoint presentations for risk evaluations instead of detailed technical reports that could be understood even without an accompanying presentation. The software’s display requirements, however, dictated simplification and choppy sentences in font size 18. These had lost the rest of their meaning on their way through the organizational hierarchy. Again, NASA’s management wasn’t able to evaluate the existing risk correctly due to an unsuitable presentation.

In the meantime, more and more people elsewhere are also challenging the use of PowerPoint. James N. Mattis, a Marine Corps General, stated “PowerPoint makes us stupid.” The Brigadier General H. R. McMaster prohibited the use of PowerPoint during his missions in Iraq on principle: “It’s dangerous because it can create the illusion of understanding and the illusion of control. Some problems in the world are not bullet-izable.” (2)

Then there is the well-known story of Lou Gerstner, the long-time CEO at IBM, who once turned off the projector on a presenter and said, “Let’s just talk about your business!”

Despite all this, PowerPoint still persists as the presentation standard for business reporting. This has consequences: a report created in PowerPoint has a resolution of 1024 x 768 pixels, the smallest resolution commonly used in companies. Since you cannot scroll through PowerPoint during a slide show, since screens and projections are intended to be viewed horizontally rather than vertically, and since most reporting systems cannot handle lists containing multiple columns, there are severe limits on what you can report in the first place. You can generally reproduce the equivalent of 1024 x 768 pixels on one fourth of a standard-sized sheet of paper with ease. That means a PowerPoint slide show is no better than taking peeks through a keyhole.

Remember: The Challenger exploded due to poor slides that were shown on the wall using an overhead projector. The slides were static because they were made of polyester. PowerPoint slides are made of pixels but they are still static despite using a computer. And their resolution is actually much worse. If you want to show photos, rough sketches, simple organizational charts, and snappy quotes, that isn’t a problem. For the complex reality of decisions, however, it is.

What are the alternatives? These, for example: