He says: If you have the data, show them. Instead of whining about “crash” and “upswing” and “slump” and “boom”. Otherwise, someone believes it is 70 % and someone else believes something else. So, the controllers may not copycat the newspapers. He says, they don’t have to: They have their data.

Matt says the same. Roughly. He has shown us a graphic. Sherman Kent drew it. 40 years ago. A secret agent from America. NATO officers were to estimate how much percent Sherman means when he says: something is “highly likely” or “probably” or “unlikely” or “highly unlikely” and so on. 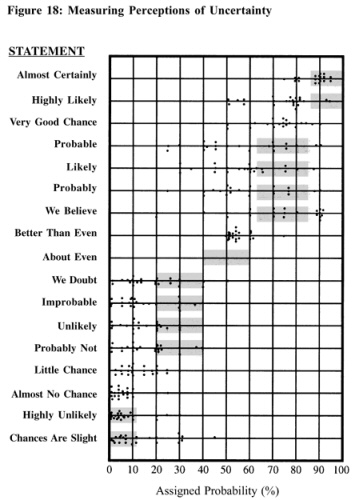 Ah. Quite dangerous. After all, this was about military stuff. If the CIA tells the President, the bad guys are coming “probably”. And the President understands, ok, well, maybe with a probability of 25 %. But the CIA had 75 % in mind: Phew.

Sherman said, that´s why there have to be standards for words in the reports of intelligence agencies: