Machines can travel to Mars, play soccer, and even win at Jeopardy. At our upcoming event in Berlin, we will be making a plea for more intuition and automation in management reporting – both driven by computers. Are robot controllers inevitable? Do we even want them?

On a long car ride to Milan, I thought about „Management between Intuition and Automation“, the topic of our executive event in Berlin. I arrived without a problem thanks to my navigation system, one of the surprisingly many computers in cars. Another computer, however, almost foiled my hotel booking. The automatic text correction feature of my smartphone replaced a ‘hab’ (a spoken form of ‘have’ in German) to a well-meant ‘Jan’. My message, therefore, translated to “need from Th to Fr in hotel … one room – Jan already mailed but no response. Thanks.” The assistants in our office were puzzled. Who is Jan? Which booking in January? Once they were finally able to decipher the text, the last room had already been taken. Fortunately, another guest had canceled at the last minute – and got me out of a jam. 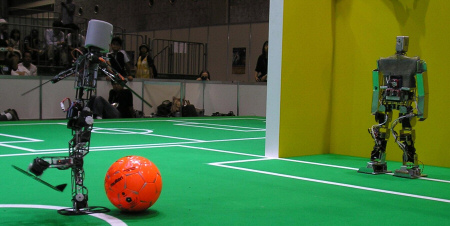 Robots already play soccer. Will they soon take over the job of controllers as well? Photo: RoboCup Humanoid League.

Between Lake Constance and Bernadino, I listened to a discussion among neuroscientists on the radio. Some had high hopes for the field of neuro-marketing, which uses pictures of the human brain in action to supposedly show which products consumers prefer. Other neuroscientists said that that is nonsense. Although you can see arousal in different sections of the brain, a human still needs to interpret what they mean. After all, machines cannot read minds. Since the science is still so young, the margin for interpreting these images is very large as well.

I also thought of Watson, IBM’s supercomputer that has been trained to interpret natural language. This computer recently won a game of Jeopardy against Brad Rutter and Ken Jennings, previously the two most successful players in the U.S. quiz show’s history. The gist of the game is that contestants receive clues which they have to answer in the form of a question. If the clue, therefore, were “This name of a boy who can fly can be applied to any emotionally undeveloped man.” the right answer would be “Who is Peter Pan?” The computer’s victory in the poorly structured field of text interpretation is a considerable success that didn’t happen overnight.

Is Watson scary? I don’t think so. Automation that is well done makes the computer appear to be clever or even intelligent. But it isn’t. Artificial intelligence is a skill while human intelligence is the desire to have those skills. Machines neither have goals nor wishes. Machines have no fear. All of these, however, are prerequisites for intelligent actions. Intelligence is neither knowledge nor ownership but rather the ability to understand and apply it. As a result, there is no reason to fear that machines can be superior to humans.

This is why I feel that we need much more automation in management reporting and analysis– partially, because there is so much room for improvement. Volkswagen can manufacture a Golf faster than most companies can generate a monthly report. But where does automation make sense? I think that a quality benchmark – something that I would call ‘lossless compression´– would be a good indicator. The machine may navigate, select, and aggregate but without losing anything that comprises the actual information itself. For example, it is not enough to simply aggregate total revenues without designating the breakdown among the different drivers. ‘Good’ means nothing if information consumers don’t immediately understand which criteria were used to determine that. In addition, these criteria also must understand rules and warn us if the things that we do are below the state of the art. For my own business, I appreciate automatically scheduled and event-driven reports.

I arrived in Milan, called home, and talked about my trip. I heard, “I understand. You want to say that people are irreplaceable but we still need machines.” That is another way of putting it.