Does BI need the iPad? Form and content shape the substance of things. If the question of form, however, is degraded to a question of which platform, content will suffer as a consequence. Is that something that we also have to worry about in Business Intelligence, where formats are being squashed to fit on devices that don’t use a mouse or keyboard?

When the Citroën 2CV was first designed, the underlying idea was to transport two farmers wearing rubber boots and carrying a sack of potatoes as cheaply as possible from point A to B. The idea was a success and the 2CV still has fans today. What once was a cheap car is now an odd collector’s item. I learned that the hard way when I once accidentally rammed into one of these rarities – and then had to pay for the engine hood.

When the idea for the iPad was born, Steve Jobs could have said that a mother and child are sitting on the couch, sharing a peanut butter and jelly sandwich and looking at pictures. The idea also became a success. iPad fans even believe that everything else – including laptops with a keyboard and mouse – will become odd collector’s items as well. I know a company that recently equipped 5,000 of its outside sales staff in China with iPads. These sales representatives visit farmers, many of whom are illiterate, in dusty environments. 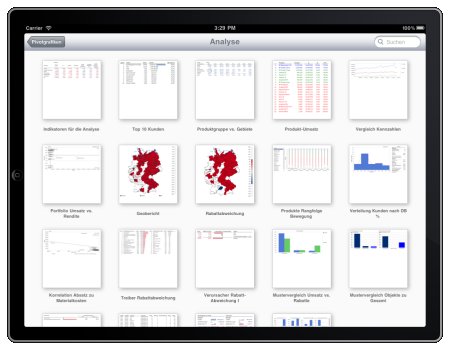 We did it as well so that no one could say that we couldn’t – and that that was the reason for our reflectiveness: BI on the iPad. Source: DeltaMaster ReaderApp.

At another large company, the managing directors decided that all new applications – including those for Business Intelligence – must be compatible with iPads. Is that visionary or just trendy? I discussed that with the IT director. He had mixed feelings about the decision but wanted to use that momentum to overhaul some areas that needed to be done anyway. I asked him, which decisions do top managers make on the road. Just because people want to have easy access to static data, product catalogs, appointment calendars and e-mails doesn’t make that Business Intelligence.

We discussed the same question with a company specializing in business data. It operates a data center that processes market data into reports and delivers it to consultants who, in turn, discuss these reports with customers. What would an iPad solution look like in this constellation? Should it be native and leverage the entire charm that Apple has to offer? Do we also have to consider Galaxy and Co. and, therefore, strive to create a more general solution for all tablet PCs – at the cost of elegance because a solution only tends to be perfect for a single device and operating system? How much data traffic could it handle? Would all of the reports have to be preloaded on the device or could you just pinch the screen to run a database query to load detailed data, for example? Never mind the cloud: We were told that they weren’t ready for too much traffic. First and foremost, they just wanted to swipe through predefined reports. Would you want to use GPS to see at which company a person is and then load the right data? Perhaps later. Do you have an idea for using the camera? No. 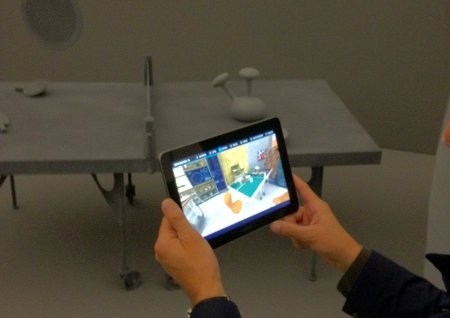 Samsung presented its Galaxy with “augmented reality” functions. Do we want to see data for the cost center “power station” if we are standing on the company grounds and have positioned the built-in camera towards the smoking smokestack? Source: own image.

Our human resources director recently took a train ride. For a few hours, he sat with his laptop across from a business traveler who was operating his iPad from a separate keyboard. He admitted that he felt that the combination of typing and swiping was rather amusing.

On the road, our consultants often use both, a laptop and an iPad. They primarily use the iPad when they are waiting. They read their e-mail or at least delete the ones that aren’t important. They can even do that on the short bus ride to the airport. The businessman in me groans: My luggage gets heavier because I should additionally take along something that is fast and handy. Isn’t there a more intelligent, cheaper alternative?

Let’s stop nitpicking for a moment and simply ask ourselves if the typical iPad gestures –tapping, pinching, and swiping – will bring Business Intelligence ahead. What’s amazing is that you can actually use finger gestures to imitate everything a mouse can do – even pixel accurate positioning. Using gestures to operate a device is intuitive, comfortable and easy to learn. But do we want to reduce operating a computer to touchscreens? On a large screen that would be uncomfortable and make sit-down work even unhealthier than it already is. Otherwise, we could place the screens in a more ergonomic position – a humungous iPad lying flat on the table in front of us. Why not? The mouse and our fingers are already competitors so to speak. Will one of them lose – or can we design user interfaces that are equally comfortable for mouse and finger gestures? As far as operating systems are concerned, Microsoft is already trying to do that with Windows 8. 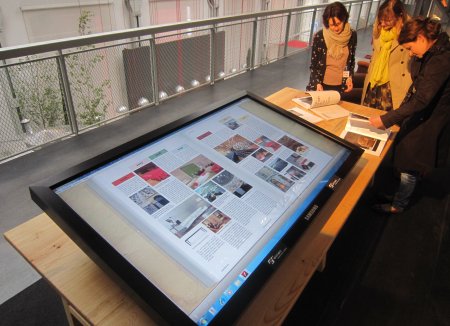 Will our desks soon look like this – with gigantic iPads lying on top? Is the mouse ready for the museum? The ladies here, at least, still prefer things analog… but how much longer? Source: own image.

What lessons about data-based corporate management can we learn from all of this? I believe:

The enthusiasm that most BI vendors feel about iPads is more tactile than mobile in nature. There really isn’t that much BI consumed on the go. We can satisfy most people’s wishes if they can just elegantly swipe through preloaded data and predefined reports.

In the future, you should be able to use BI with your mouse or your fingertips. Apple showed us that with its iOS operating system for iPad and iPhone – and is once again the leader and paradigm for interaction. Microsoft is following suit and, therefore, strengthening this trend. As a result, interacting with a computer will become even easier over time.

iPads lack many things that real BI needs and that laptops, which are highly mobile as well, have long had: keyboards, interfaces, performance, industry standards, etc. The fact that the iPad has so many competitors and that BI, in turn, must work with all tactile devices is costing the industry valuable time and effort, which it could better spend concentrating on the further development of the content itself.

Someday, the iPad will seem as strange as a Citroën 2CV. At that point, our laptops will be flatter, we’ll be able to clap the screen to make it a touchscreen. A mouse, keyboard, and finger will work together in harmony. And people will write that when the iPad was invented, the idea was: a mother and child are sitting on the couch, sharing a peanut butter and jelly sandwich and looking at pictures.