Right now, it’s pretty safe to be a pirate – even though navies around the world are already sharpening their grappling hooks. As far as reporting is concerned, it also pays to be a buccaneer … and the Wall Street Journal agrees.

Pirates don’t follow the rules. And the methods they use to enforce their interests are anything but gracious. That’s why I recommend this approach to anyone who wants to go beyond typical reports and transform reporting for the good of the company as a whole. The time is now. In periods of crisis, things are examined more closely and priorities change. Waiting and procrastinating are out. Some projects, which were pushed back to wish lists for quite some time, can finally be implemented now in lightning speed.

But what does all this have to do with the honorable, over 100-year-old WSJ? Let’s take a look at an example from November 14th, 2008. Germany’s ‘Börsen-Zeitung’ and the Journal both reported the stock developments on the London Stock Exchange (LSE).

The Börsen-Zeitung shows the development over approximately 17 months. The maximum value was 2000 pence while the minimum was under 416 pence. Now, let’s take a look at two major changes, marked in orange, for this period: the very recent and short jump of 44 % and the slower rise of 60 % in the past year. From a visual stance, the 60-percent jump is more than three times the size of the 44-percent one. Considering that 60 % is only 1.4 times the size of 44 %, the discrepancy is huge.

The WSJ published the same recent development of LSE stocks, however, without distortion. How? The Journal uses a logarithmic scale while the Börsen-Zeitung does not.

What is most amazing, perhaps, is under which flag logarithmic scales sail. The legend under the WSJ chart says:

“The charts show the percentage change in each index’s or stock’s value, rather than the point change, for purposes of comparison.”

No word is lost about logarithms. The publication simply informs the reader that the scale ensures the comparability of the relative changes. The Wall Street Journal doesn’t let the usual argument that people don’t understand logarithmic scales stand in the way of the proper presentation. In fact, if we take a look at the circulation numbers, we can see how lame that excuse really is. 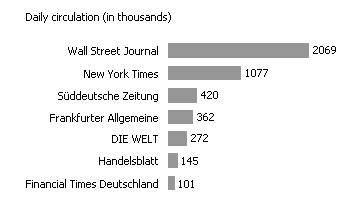