When managers and statistics collide, less is often more. In general, however, there are not enough statistics in data visualizations. The only requirement is that they need to be robust.

This past Tuesday, I visited Professor Nicole Koschate from the Department for Marketing Intelligence, at ‘WISO’, my alma mater in Nuremberg. Oh yes. Although the lecture halls are now named after consumer credit institutes who advertise with two-bit pop stars, they at least look a whole lot better (the lecture halls, that is). If a submarine served as the architectural inspiration for the original WISO building, then the new building bestrides the idea that people think that the light above the water surface is friendlier.

Appropriate to the themes of Market Research I and II lectures, we discussed the role of statistical methods for management information with the students. As we already mentioned a while back, less is often more. But usually it is the other way around: It’s really frightening how few statistics are used where we really need them! 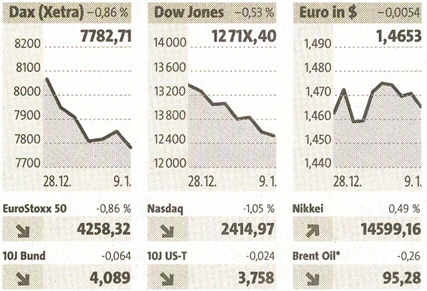 Stock information on the cover of the Financial Times Deutschland: These charts lack statistics – and common sense! All they show is pseudo-accuracy and misleading chart junk.

Let’s take a more critical look at the Financial Times Deutschland (FTD). Where is the Nikkei headed? The Dax and Dow Jones are in a downward spiral. That is the tendency and has been the trend for quite some time now. Even someone who is not particularly adept in data analysis could say that after taking a closer look. The arrows for Eurostoxx, Nasdaq, etc. seem to say the same thing, don’t they? Could it be that the arrows are redundant, when there already is a plus or minus sign?

The students were shocked. Should the everyday tools that they used during their studies no longer apply once they enter the business world? Is it asking too much for a renowned financial newspaper to use trend calculations? Whoever uses them, would be in for a surprise. The friendly upwards-pointing arrow is misleading. The signal and message are not the same. The trend for the Nikkei points downwards. The best way to express the microscopic change from the previous day is with the actual value and a plus or minus sign. 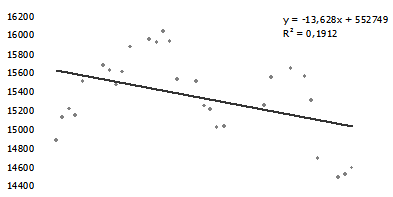 Arrows signalize the path and direction. In combination with developments over time, they also signalize trends. Simple statistics show if a trend exists or not. This can be correctly expressed geometrically. The slant of the arrow must then equal the slant of a trend arrow. For example:

Of course, it can always get worse. Bella recently accused our local newspaper Nürnberger Nachrichten of using the same misleading arrows in one of two slopes. They showed her! Now the paper uses perpendicular up and down arrows as well. On January 24th it looked like this:

The Dax, which had a -5 % change, got a perpendicular down arrow

. Crude oil, with its -1.5 % change, received an arrow in a downward-sloping 45-degree angle

. The Euro, which increased 0.5 %, was given an upward-sloping 45-degree angle

. And the Dow, which jumped a whole 2 %, was awarded a vertical up arrow

Personally, I’d give these charts a

…or even better a

Low resolution can make you blind - reporting a la iPhone