Wouldn’t it be great if there were signals for managers, investors, savers and for politicians that would be as clear as a red light is for drivers and pedestrians? Clear correlations between signal and action, however, are rare. The discussion about rating indicators has recently added fuel to the fire instead of squelching this wishful thinking once and for all.

This morning, my radiators were cold. There was thick frost on our lawn. I went down into the basement to check the furnace with an uneasy feeling in my stomach. The digital display showed no sign of any problems. The analog pressure gauge, however, pointed outside of the green area. I checked the valves. They were all open. Only two red levers on the same line were closed. I opened them and the needle began to move. Ah ha. Back upstairs, I placed my hand on the radiator. It began to get warm. 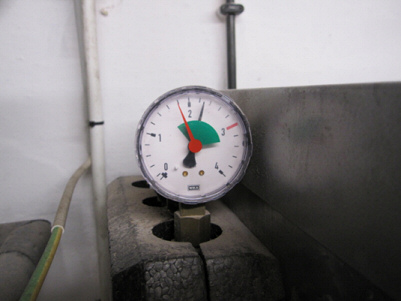 Too little water in the heater? The pointer must be in the green area.

A few days before, we were still in a warmer region down South. I took a walk with Bella and her friend Bambou. On a trail that was barely traveled, someone set up poles – probably to mark a water line to be repaired. The upper end was painted red. That way, you could easily see the poles in high grass and none of us tripped over them. 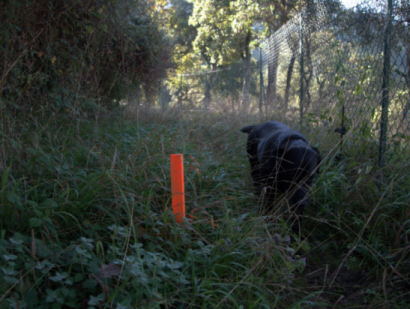 Bella investigates where signs are and need to be clear.

That afternoon, a neighbor took us for a trip with his boat. We passed a navigational aid. Its marker buoy had two triangles that pointed downward. Our skipper knew it meant that he should pass the marked dangerous area from the south.

Bella’s second investigatory expedition on this day. In our documenting frenzy, we swerved around the dangerous area so long until we accidentally touched ground. Then we retreated.

What does all of that have to do with this blog’s message?

The heater’s signal is based on a simple closed loop; the pointer and water inflow stand in close relation to each other. The poles in the forest signalize a temporary obstacle. The navigational aids at sea mark a permanently dangerous spot as well as the area in which you can pass it safely.

The more seriously we take these signals, the safer we may feel. The heater provides warmth again, we don’t trip over the poles and we don’t land in flat water. Our trust in the signal is rewarded. These signals are reduced to an adequate minimum. Their simplicity makes it easy for us to understand, see and use them. The details behind the signals are not interesting. The exact amount of water in the heater is just as unimportant as the date when the poles were placed or the ground profile of the flat spot. Clear signals are simple because they omit everything that is unnecessary.

This, however, is not the case for many business and economic signals. The signals of rating agencies, for example, have recently come under criticism. The public consultation of the European Commission on 5 November 2010 reflects the status quo. Many criticized the favorableness towards the paying issuers and the lack of transparency as to how the signals were devised. The EU wants to urge its banks to create their ratings themselves. The signals should become ‘more accurate’ as a whole.

Since many follow them, herd instincts grow, reactions become more exaggerated and crises get worse and worse. I think that the signal itself is the problem because it summarizes things that shouldn’t be abridged in the first place. No one can offset opportunities and risks in a satisfactory way. We need to describe the complexity adequately. Rating agencies could do that. They could also make comparisons and show developments. We should, however, pass on their consolidated signals.

One to a thousand