Animating statistical data can be tricky. Nevertheless, motion pictures are a step up from photos. We want to get closer to the action. We don’t want to just see results; we want to see how we got there. Here’s an idea – straight from Hollywood.

Do you remember the movie “The Matrix”? Can you recall the shooting scene on the roof of a skyscraper? Agents, the bad guys in black suits, were shooting at Keanu Reeves alias Neo. Bending over backwards, he dodged the shots. The lapels of his jacket puffed up from the storm. The bullets drilled air channels and missed the hero. You saw all of this from the perspective of an extremely fast, 360-degree rotation around the scene –serialized in thousands of seconds, frozen, and for the decisive moments reduced to a frame speed so that you could follow the bullets’ paths as if they were just lightly hit tennis balls.

Maximum slow motion: The “helipad fight” in “bullet time”. This makes the bullet shots so slow that you can see which path they take and how Neo dodges them.

Hollywood puts a tremendous amount of effort into producing these types of effects. John Gaeta, who was responsible for the special effects in Matrix, was rewarded with an Oscar. He placed a total of 120 individual photo cameras and two film cameras surrounding the scene. Using these masses of image material, his team generated the actual camera ride with the help of a computer. Animating statistical data requires a lot less work. Ted Rosling’s famous presentation “Debunking third-world myths with the best stats you’ve ever seen” is just one example. We were critical back then. So what made us come back to that topic again?

Controlling is dominated by results. There’s nothing wrong with that because we measure performance based on results. If the results are fine, there’s no problem. Nevertheless, plain results leave the more mistrusting types a bit uneasy – the same feeling that more cheerful souls get when the results are no longer good. Micromanagers, control freaks, and pea counters – all who receive our due admiration – ask themselves much sooner, “If I know the result but not how we got there, what is my job here?”
Part of the irony of modern corporate bureaucracy is that executives of many businesses learn things much later than their employees on the front lines. Some people think that doesn’t matter because that is the very reason why there is delegation. We like to counter – that would be fine and good if delegation were only that easy. But more on that another time.
We feel that management needs to get closer to the details – as early as possible, as accurate as possible. To be accurate it is important to understand the processes. This is nothing new; in fact, that is how industrialization started. It can become new and exciting, however, when we take advantage of technology to get an inside look at processes that you could never examine just by merely looking. This is why we are proud that we can animate statistical – in other words, compressed – data so that we can visualize developments dynamically instead of just statically. 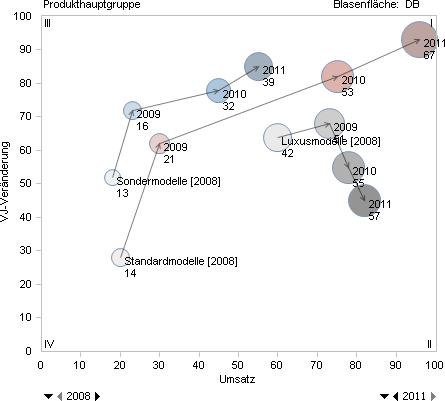 Huge effect, little effort: Animation, acceleration, and hesitation help us work with statistical data. Exploration, however, is something else. Source: DeltaMaster.

But just as with Rosling’s data, we also need to proceed with caution and avoid the usual pitfalls. KPIs describe data with distribution, concentration, and abnormality but rarely show the causes. If the path to a result shows a pattern, people tend to see a trend and prolong it arbitrarily. The biggest, yet rarely identified danger is circular reasoning. For example, you can only call the Web page that receives the most clicks the most popular if you know something about the users’ assessment. You cannot judge popularity based on their behavior alone. 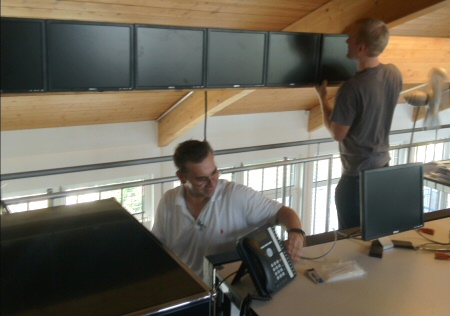 This was one of the reasons why we decided to test our concept of bullet time on Web statistics and other process data. We stretched all of the sequences that we could observe in a timeline, which we can push back and forth however we wish. Depending on our needs, the sequences can run in a few seconds or in real time simultaneously before our eyes. In the case of Web data, it feels as if we were watching over the people’s shoulders. The effect is amazing. We can understand the visitors of a Web site just as a supermarket owner understands his own customers just by observing them from a bird’s eye view as they go through the store day after day.

In “The Matrix”, machines took over control of the world. People were only needed to supply energy and were placed in isolation in small capsules and given liquid food. Their brains were linked to a software simulation of a normal world. In the movie, people had two choices: If they swallowed the bitter “pill of truth”, they would see through the matrix, understand in which miserable production process they were trapped, become rebels, and have to fight. If they swallowed the sweet pill, everything would remain as dire as it was, but they would live the illusion of an intact world. If you go to work tomorrow wearing a black suit and Ray Ban sunglasses, your colleagues will know: You’ve made your decision.