The fundamentals of management information (3)

We are continuing on with our glossary of the most important terms and topics in management information and Business Intelligence. In doing so, we hope to help managers communicate better with the IT experts, controllers, and data scientists in their companies.

A common style element in → dashboards. Gauges are a fad that has both con­ceptual and visual issues; you could call them the “bell-bottom pants” of Business Intelligence. They have poor → readability and require large amounts of space due to the low → resolution. On an ironic side note, analog tachometers in cars are ana­log because there are no other technical alternatives. In race cars and sports in general, speed is displayed digitally. RPM, however, is presented in a gauge so that the drivers can see how far they can go until they hit the red. DeltaMaster does not use gauges. Period. 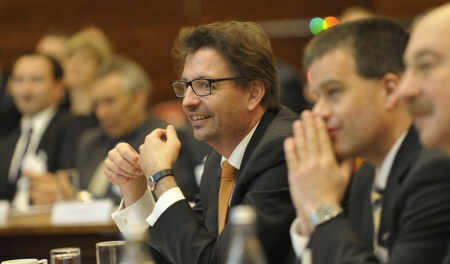 KPI view that derives gross profit from revenues over a series of steps. Gross margin plays a fundamental role in steering short-term profitability and builds a bridge to P&L in the balance sheet. Gross margin can be reported in several dimensions through calculations related to standard costs. Accordingly, you can also calculate the gross margin for smaller profitability segments such as products, regions, customers, etc. In addition to being part of the → template concept and → rules in DeltaMaster, gross margin is the most important component of the → central report.

Graphical presentation of a → frequency distribution showing attributes such as quantity, price, or revenues in a metric scale. DeltaMaster offers a range of built-in business and statistical methods and has suitable modules to visualize frequency.

Tree-like presentation of structures arranged on a sphere for a compact, inter­active display. This type of see-and-go browsing allows you to gain an overview on structures and see their details with little interaction because you view several elements at once. This eliminates time-consuming clicking to expand and collapse branches as in a go-and-see approach. DeltaMaster takes this principle a step further and updates even complex reports when you mouse over a node. This enables ultrafast visual mining – even on larger data sets.

Symbols used as operational elements. Icons are good if you already know them. If you have to learn them first, a simple text is much easier. Some icons become ludicrous over time. The 3.5” disk symbol is still a relic in Microsoft Office long after its demise. In DeltaMaster, we use icons as little as possible.

Highly automated, data-driven reporting that has many parallels to industrial manufacturing. Many steps are standardized; reports are produced at low costs in consistent quality. The prerequisite for industrial reporting is the use of → graphic tables. The counterpart to industrial reporting is something we call „consultant reporting“. This approach makes sense for special presentations such as annual shareholders’ meetings where the time it takes to produce them is not an issue and you intentionally select the data to portray a specific message. DeltaMaster, in contrast, is built to delegate as many routine tasks to the computer as possible and produce data-driven reports to objectively show the current business reality and transform it into clear signals.

A complex combination of text, numbers, images, and → charts. The mass media frequently uses infographics that are often on the borderline to infotainment. Bella is a bit wary of them because they often lack integrity. Their wide distribution, however, has shaped the expectations and habits with regards to visualization in companies as well. Sometimes, a lack of integrity even has the power to cause economic damage. This was the case with the recently published „chart of doom“.

Business Intelligence in its fastest form. Sometimes projects take longer than an urgent problem lasts in the first place. In these cases, we recommend a “bypass” of sorts. The operational units enter important data for management in a simple data entry template through the Web – ignoring, at first, the risk of redundancies. The data lands in a cube designed for data entry. Report jobs ensure that management receives the desired information, if needed, in → real time. DeltaMaster supports instant BI.

Rules that let data in charts look the way it should. There is a lot that can go wrong when you encode data as a graphic – even among professionals and high-circulation media. Yet these so-called “standards” often become common practices in companies. Bella has collected countless examples that show what all can go awry. Most of the problems have to do with the → scale. Times series are espe­cially prone to false presentations. Some of them are downright spectacular. DeltaMaster has patented methods to correctly visualize data, for example, for comparable scales of time series and special chart types for complex visual tasks such as dealing with → size breaks.

Dialogue with the computer with the help of a mouse, keyboard, or finger gestures. Interaction is often necessary if we want to truly understand something. The longer the interaction takes, however, the greater the risk for distraction is. This has to do with → change blindness. Previously, companies would brag how their managers can access the information they need on their own every day. Meanwhile, we know having “information at their fingertips” is straining for managers. That’s why we strive to use as little interaction in our software as possible to create a maximum effect with minimal clicks. DeltaMaster, for example, uses navigation methods that explain variances quickly (→ variance analysis).

Screens with high → resolution and formed by combining multiple standard monitors to create a single space, similar to those used for a public viewing of sports events. The goal is to bring more pixels within the space that the eye can view at a glance. A typical wall projection in a conference room has the resolution of an LCD projector. With the new full HD projectors, that means 1920 x 1080 pixels on wall area of 4 x 2 meters. A monitor wall comprised of 9 full HD monitors requires the same amount of space – but delivers nine times the resolution at the same level of readability. No matter which topic you are debating alone or in a team, you can now display many things next to each other instead of after each other. In many cases, this is necessary to create an overview and make comparisons – and, therefore, ensure productive work sessions. People have known that for a long time, but the necessary technology was previously too expensive to use them for managing business performance. Times have changed. DeltaMaster is classified as a pioneering product for using large-screen monitors for performance management and handles large formats with elegance.

An important rule for → charts. Differences in length and size should be proportional to the differences in values. Due to our innate → number sense, we humans take proportionality as a given and interpret charts accordingly. This is the reason why the → perspective priority for circle, area, column, and → bar charts is different than in → line charts.

A sorry type of label. Charts should always display the graphical element (bar, column, area, dot, or line), the graphically coded value, and its name close together. Otherwise, the decoding effort exceeds the desired benefits of a chart. In maps, you need to code many things simultaneously. Since streets, rivers, towns, churches, topography, and vegetation all compete for the same limited space, legends are almost unavoidable. When you are making charts, take a moment to consider your eyepath. If your eyes need to jump back and forth, up and down just to read a few numbers, a → graphic table is the better solution.

A scale with the same distances to the X and Y axes. Linear scales can be tricky in combination with → line charts if they display series of different magnitudes at the same time. In this case, → logarithmic scales are the better choice.

Type of → chart for → time series. Line charts are widespread, but often tricky and misleading. This, in turn, is due to the longstanding myth that people cannot understand → logarithmic scales. Engineers simply shake their heads on that one. In many situations, → linear scales create the wrong picture – not a simpler one. The standard settings in DeltaMaster apply common sense to deal with the resulting problems in an appropriate way.

Necessary for → line charts, → dot bars, and dot columns. A line chart consists of many different segments, each with a different slope. The human eye uses this slope to compare and interpret the development. The slope has what we call → perspective priority. A linear scale, however, uses the same slope to show revenue growth from 10 to 20 as well as 100 to 110. Should both changes look and be interpreted the same way? Some people say it depends. We say that’s nonsense! The same slope signalizes the same dynamics, which are expressed relatively. Logarithmic scales display the same relative changes on every level with the same slope. There it is. Through logarithmic and “comparable” scales, DeltaMaster ensures that you can see and compare the dynamic of developments in their true light.

The fundamentals of management information (2)