The fundamentals of management information (5)

How can management information fulfill its purpose? When we ponder this question, we consider many different aspects including design, form, rules, methods, and trends. What role does brain research play? Which textbook business methods are a must? Is notation necessary? How far can you standardize reports? Our fifth posting in this series provides insights and answers.

The human ability to rapidly process simple visual signals and recognize new relationships even when they are incomplete or blurry. In this regard, humans are still superior to machines. DeltaMaster combines the strengths of both man and machine by choosing the highest possible level of automation for all sub-steps that can be delegated to the computer and using graphical forms that support and facilitate the recognition of peculiarities. Some algorithms even simulate the human recognition process. 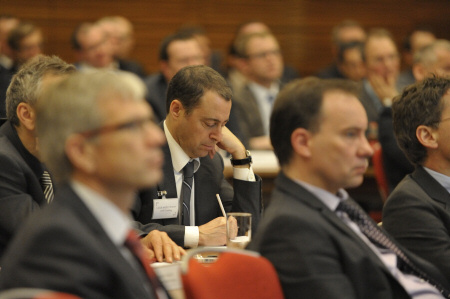 Values expressed as a fraction of 100 to facilitate comparisons. We encounter percentages as margins, rates, and shares. We say: who cares about relative values? Sorting tables by margins and rages instead of absolute values, highlighting relative values in charts, or use them solely in tables in place of absolute values is dangerous. Margins and rates direct your attention to effects that are not very relevant or have a small base. They only appear to make things comparable. This, in turn, has to do with the fact that they reference themselves. Shares are slightly different because you usually know the sum which they reference. In DeltaMaster, graphic tables provide an elegant solution for some of these problems. Bars for absolute values show the relative meaning of one object in comparison to the others without needing a special percentage calculation.

A concept that we felt was missing in the theory of perception so that we could define basic → integrity rules. In the case of lines, you primarily notice how steep or flat they run. In bars or columns, however, it is the sheer length. Dot lines, in comparison, are similar to columns but work like lines. And there are rules which you can derive from all of that – for example, that you should not chop off the bottoms of columns and generally apply a logarithmic scale to lines. When generating charts, DeltaMaster automatically applies built-in rules of integrity so that the user doesn’t have to worry about perspective priority.

A commonly used, yet heavily chastised chart form. As the visualization expert Edward Tufte once said, „The only worse design than a pie chart is several of them.“ Generally speaking, you should only use a pie chart when the data displayed actually represents a whole. Yet even that rule is frequently ignored. It is difficult to intuitively compare different-sized pieces of the pie. Since they are difficult to label, the human eye has to jump back and forth in order to read them. When they are well done, pie charts – even several of them – can be an attractive, easy-to-understand visualization form. That is why DeltaMaster offers them as a component of → graphic tables. Pie charts have a bad reputation because people commonly use them in scenarios where bars would have been the better alternative. Bella has already howled about that many times.

Expression of a company’s intentions to penetrate the market. DeltaMaster intertwines analysis, planning, and reporting and supports these processes with helpful functions such as data entry, automatic allocations, input forwarding, and comments. Simple workflow functions foster good team work and ensure that different planning steps are all completed in the proper order.

Segmentation of business units, products, customers, sales regions, etc. by two measures which form a four-field matrix through their X and Y axes. Originally, Boston Consulting Group suggested using portfolio analyses to show relative market share, relative market growth, and norm strategies by segment. DeltaMaster supports them as a standard business analysis with many extras (e.g. the option to save the segmentation as a virtual hierarchy) that provide deeper insights.

Common format for presenting reports. PowerPoint is very rigid, has low → resolution, and does not support scrolling, moving, or zooming. Its reports and data are frozen, which guarantees no unpleasant surprises during the presentation and a great deal of work to update them. If PowerPoint becomes the only written report format, we will all have a problem on our hands. Both space shuttle crashes from NASA have been brought in connection with our modern slideshow culture. DeltaMaster uses PowerPoint as an output format and can fix its update weaknesses through embedded live reports that you can update by hitting the “F9” key. We personally, however, recommend using the interactive presentation mode in DeltaMaster instead because it makes presentations more impressive and enjoyable, which help hold your audience’s attention.

The practical side of reporting with enormous responsibility on behalf of the presentor. You don’t just create reports for someone’s personal perusal. More often, you create them to present them to a group – typically, on a wall using an LCD projector. The typical procedure is to export them to → PowerPoint because the presenters want to preserve their own nerves during the presentation. Nevertheless, LCD projectors have a relatively low resolution and PowerPoint has its pitfalls as well. Using the presentation mode in DeltaMaster, you can make a presentation as you normally would in PowerPoint. As questions arise, however, you can use its interactive functionality. These presentations work very well on a → large-screen monitor.

Profile chart that is nice to view but difficult to interpret. The more objects you wish to display, the stronger the lines overlap which makes them harder to label. Bella feels that makes them even worse than → mosaic displays. As with all other charts, a graphic table displays the same information in a way that is easier to read and supports more attributes.

A criterion for quality reports that is frequently misunderstood. The saying that a picture is worth a thousand words does not automatically apply to graphics. The faces of clocks and analog gauges are nice – and all that we had in previous times. In addition to the current time or rpm, they also show how must time remains before an appointment or how close you are to redlining the engine. On the other hand, speed is easier to read from a digital display. Embellishments such as bold, italics, background colors, lines, etc. often make things more difficult to read. White space and gaps are more suitable for arranging, grouping, and separating things. In DeltaMaster, you can use the automatic table layout to ensure optimal readability. It creates white space where it belongs and prevents the use of bold or italics.

Controlling business processes as the day’s events unfold. Many sparks of insight fizzle out in monthly reports, and many problems are only visible when you observe them on a daily or hourly basis. We advocate systems that visualize the process cycle instead of just the status. Management, in our opinion, has the overview to recognize the need for strategic decisions amidst operational chaos. If CXOs were customers of their own companies more often, many things would run differently. DeltaMaster offers sophisticated → animation functionality and can fill monitor walls with → high-resolution information. Both are necessary to visualize cycles – whether in production, services, or sales.

Guidelines for designing reports and → charts that are universally accepted. (See → notation for more on formal design rules). Examples of content-related design rules include: time runs from left to right (→ time rule), KPIs belong one beneath the other (→ KPI rule), and current and cumulated belong together (→ cumulation rule). In real-world usage, conflicts may emerge that show the rules have a hierarchical order and, therefore, the more important rule has prevalence. A good report and chart design, in other words, is always a compromise. These rules are set up accordingly in the default settings and → report templates of DeltaMaster.

The ultimate benchmark for designing reports and advertisements. Resolution determines how much information can be brought within → eyespan. Many technical advancements – such as better microscopes and telescopes, more compact circuit boards, and additional pixels on monitors – can be measured as additional resolution. But beware: the good old slideshows of days gone by use slides with an incredibly high resolution. The resolution of today’s projectors is tiny in comparison and a major step back! But salvation is near. In the same amount of wall space needed for an LCD projection, you can set up a monitor wall that offers 18 to 24 times more resolution. DeltaMaster already offers report formats for large monitors and video walls.

Describes the phenomenon that people can only easily and consistently process elements of a → chart when they are very close to each other. People decode charts using a comparably slow working memory that, in turn, has three sub-memories for visual, verbal, and symbolic processing that rarely get in each other’s way. When the text, numbers, and form of a chart complement another, people will quickly understand them because the channels strengthen each other. Inconsistencies among the channels can occur when the elements’ positioning is not optimal because the eye associates a new location with a new meaning. In other words, when the label, number, and graphical element are scattered in the chart, the working memory must work harder to fix the inconsistencies. Astonishingly, even small distances can break relationships. We paid close attention to this rule while designing the → templates in DeltaMaster.

Describes the negative correlation between eye path and → attention. As the eye path of a report becomes longer and more complicated, people have a harder time reading it and paying attention. When you are reading numbers vertically and then have to make a horizontal jump to view a chart, this disrupts the flow and is very strenuous. The charts in DeltaMaster are designed to ensure an optimal eye path.

Cognitive rule of classification. You can reduce the complexity of the world by cre­ating a description and classification into three groups (e.g. like, neutral, don’t like). Classifying things into two groups is dogmatic (e.g. believers vs. non-believers), four is unclear, and five is more precise than you can really say. The same applies to how you would group data elements in DeltaMaster.