Even among data analysts, it seems that we don’t give practical things the attention that they deserve. Today, however, that’s going to be different. What do the readers of this blog and its author really have to fear today? After all, it’s Friday the 13th.

Today, I have to travel almost exactly 1,000 km. I planned this trip a long time ago. I did, however, quickly register that it would fall on Friday the 13th. So, I prepared myself…

Fridays are dangerous
If you are superstitious, here is the good news first. Fridays are much more dangerous than other weekdays. The reason is anything but trivial. For most people, the weekend starts on a Friday. More traffic leads to more accidents. This is backed by our own small analysis of current accident statistics. 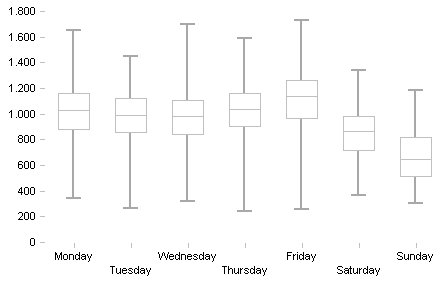 More accidents take place on Fridays than on other weekdays. (Source: The Federal Statistical Office of Germany, Accidents with Personal Injuries Between 2000–2008, Chart: DeltaMaster).

Thirteen is irrelevant
Using accident data collected in Western Germany from 1964 to 1982, Müller showed that more accidents do not take place on Fridays that fall on the 13th than on other Fridays*. Wunder confirmed this observation in Germany from the years 1985 through 1999**. And we made the same conclusion based on the data from the years 2000 to 2008: 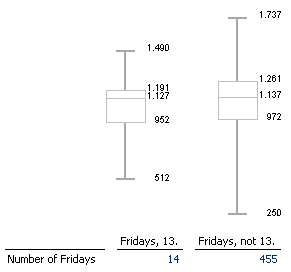 More accidents do not take place on Friday the 13th than on other Fridays (Source: The Federal Statistical Office of Germany, Accidents with Personal Injuries Between 2000–2008, Chart: DeltaMaster).

That means that we should be able to cope with the dangers of the current day. This belief, by the way, is widespread. At the very least, most people make occasional jokes about the date. Friday the 13th, however, primarily takes place in the media. Today, it will be fun to count how many times someone talks about a century-old superstition*** that is backed by current accident statistics. That, too, is a myth. Friday the 13th is a modern fabrication. In Germany, the first references date back to the time following World War II. And probably we will see some therapeutic nonsense again that the number thirteen actually brings luck.

We all want to believe that our times are more enlightened than those of the past. But they are not. To the contrary: What some claim to be enlightenment is often just a new superstition in disguise.

And if you still don’t want to leave your home today, try practicing your pronunciation of paraskavedekatriaphobia. That will surely occupy some of your time. This horrible word describes the fear of days like today. But does anyone really suffer from it?